Washington, which usually refrains from criticizing human rights violations in Saudi Arabia, has called for the release of blogger Raif Badawi. The writer was whipped and sentenced to prison for "insulting Islam." 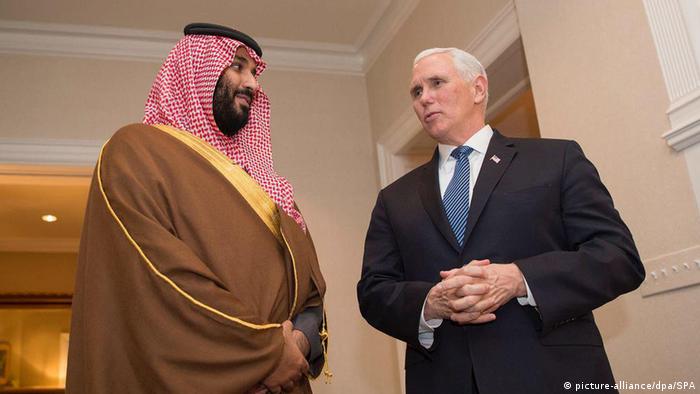 US Vice President Mike Pence has urged Saudi authorities to free Raif Badawi, a blogger who was jailed for 10 years in 2014 for "insulting Islam."

At a conference on religious freedom in Washington on Thursday, Pence not only offered the usual US criticism of human rights violations in China, Iran and Venezuela, but unexpectedly also raised the controversial incarceration of Badawi in Saudi Arabia.

"In Saudi Arabia, blogger Raif Badawi is still in prison for the alleged crime of criticizing Islam through electronic means," Pence said.

Earlier this month, French press freedom group Reporters Without Borders (RSF) revealed that it had sent a team to Saudi Arabia in secret in April to advocate for the release of 30 incarcerated journalists, including Badawi.

'I will continue to fight for Raif and for free expression'

Pence also highlighted the detention of religious dissidents in Eritrea, Mauritania and Pakistan. "All four of these men [including Badawi] have stood strong in defense of religious liberty, despite unimaginable pressure, and the American people stand with them," Pence said, "The United States calls upon the governments of Eritrea, Mauritania, Pakistan and Saudi Arabia to respect the freedom of conscience and let these men go."

President Donald Trump's administration has come under severe criticism at home and abroad for not acting against Riyadh over last year's killing of Jamal Khashoggi, a US resident and critic of the hard-line Saudi regime.

Saudi Arabia has been in the spotlight since Khashoggi's alleged murder in Turkey. Last month, Agnes Callamard, the UN special rapporteur on extrajudicial executions, said in a damning report that Saudi Crown Prince Mohammed bin Salman should be investigated over the alleged killing.

Trump has backed the crown prince and said that human rights concerns should be secondary due to the Riyadh's military alliance with the US and shared hostility toward Iran.

International rights groups have criticized the decision to allow Saudi Arabia to host the G20 summit in 2020.

Badawi was punished for writings that Saudi Arabia's theocratic authorities consider damnable. For example, in a 2010 entry later republished in his collection, 1,000 Lashes: Because I Say What I Think, Badawi made the case for a "culture of life."

"What we need most urgently here in the Arab, or rather the Islamic world, is a recognition of the individuals who live in these societies," Badawi wrote. Beyond that, he added, those individuals need "acknowledgment of their freedom and respect for their ideas — that is: recognition of all those who fight against the concept of theocracy as a top priority."

In other posts from 2010, Badawi addressed intellectual freedom, which, he wrote, is under grave threat in many Arab countries. He wrote that repression leads to consequences that could be disastrous for the region in the long term: "I'm really worried that Arab thinkers will migrate in search of fresh air and to escape the sword of the religious authorities."

Dissident voices such as Badawi's are a threat to Saudi Arabia's strictly controlled ideological hierarchy. "They want everyone to be of the same opinion," Ensaf Haidar, Badawi's wife and recipient of DW's 2015 Freedom of Speech Award, told DW in an interview published in May 2017.

Read more: Ensaf Haidar: An appeal to the Saudi government

Opinion: Raif Badawi is free, but world must speak out for other jailed journalists 12.03.2022