Ensaf Haidar, wife of blogger Raif Badawi, who was sentenced to 1,000 lashes by a Saudi court, appeared at DW's Berlin headquarters to accept the Freedom of Speech Award. She announced the creation of a new foundation. 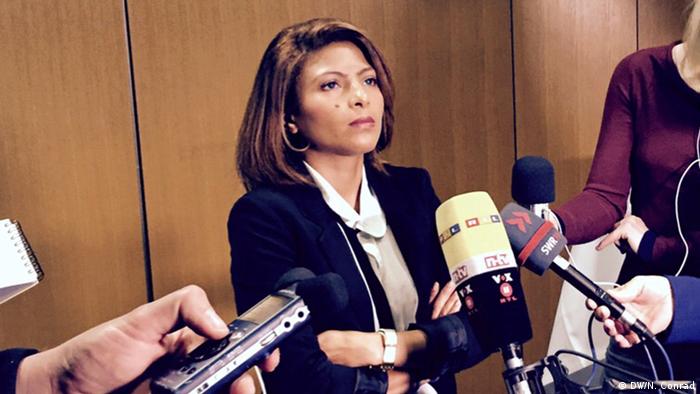 Ensaf Haidar accepted the DW Freedom of Speech Award from Director General Peter Limbourg at the end of a press conference on Friday, which she used to announce the creation of the Raif Badawi Foundation for Freedom (RBFF).

Like Haidar's campaign to free her husband, serving a ten-year prison sentence while he awaits another 950 lashes, the new foundation has to walk a political tightrope. Its purpose is to promote free speech, the human right her husband is being punished for exercising, but as Haidar said at the press conference, "We are not against any government - not the Saudi government or any other."

Based in Quebec, Canada, where Haidar lives with her three daughters, the RBFF aims stay out of international politics and refrain from direct criticism - even as it mounts workshops on journalism, blogging, human rights, liberalism, and, as its press material says, "the exchange and enhancement of free societies in the Arab world."

Haidar also avoided criticism of the German government, which continues to sell military equipment to Saudi Arabia, though Economics Minister Sigmar Gabriel did bring up Badawi's case on a recent visit to Riyadh. "I don't want to get involved in economic questions," she told reporters. "I want to thank the German government for their support. The German government and the German people have always supported Badawi. Of course, I would like all states to help more, but my only concern is to free my husband." 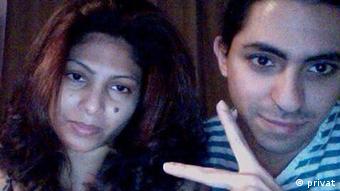 Badawi's health is said to be very poor

The activist also refused to be drawn on the effect of Badawi's arrest on the blogging community in Saudi Arabia. "I have no contact with other bloggers, in Saudi Arabia or outside," she said. "I am only an activist on the issue of my husband."

Badawi's blog, the Saudi Free Liberals Forum, shut down after his arrest in 2012, was characterized by criticism of the power of religious authorities in the country, rather than the Saudi monarchy itself. "I'm really worried that Arab thinkers will migrate in search of fresh air and to escape the sword of religious authorities," he wrote in 2010.

More generally, Badawi often attacked political Islamism and the conflation of religion and the state: "Look at what happened after the European peoples succeeded in removing the clergy from public life and restricting them to their churches. They built up human beings and (promoted) enlightenment, creativity and rebellion," he wrote in another 2010 article. "States which are based on religion confine their people in the circle of faith and fear."

"I don't think that he crossed any boundaries," Haidar said. "He was respectful of religion; he was respectful in his own statements. That is why I stood by his side from the start. The charges against him are that he started a website, that he broadcast a liberal ideology and that he insulted religious symbols."

A surprise for his release 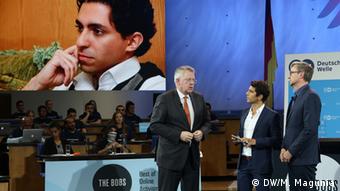 Badawi won the award in February

Badawi himself is not yet aware of the new foundation, though he is named as one of its co-founders. "It was always his dream," said Olaf Kellerhoff of the Friedrich Naumann Foundation, who is serving on the RBFF's international advisory board. "But he himself is not involved in it organizationally or strategically in any form. We hope he will be soon, after his release."

"We wanted to have it as a surprise for him when he's released," Haidar said afterwards. "So his dream will be fulfilled. Of course, it is his foundation, because he is a symbol for freedom of speech in the Arab world. It has been his idea since 2011."

Though Badawi was acquitted of the charge of insulting Islam in 2013, which carries the death sentence, he nevertheless received the first 50 of 1,000 lashes in January. He was due to receive 50 more each week, but the Saudi government suspended the sentence on medical grounds, since the wounds had not healed. "The last information I have is that the sentence was confirmed and his case was transferred to another court on appeal," Haidar told reporters.

Badawi's health remains poor, according to his wife, who is allowed to speak to him on the phone once or twice a week. "He does not like to talk about his condition, but he's still in a very difficult health and psychological situation," she said. "He has been separated from his children for many years."

Saudi blogger Raif Badawi has been in prison for more than a year. For nearly just as long activists have organized campaigns in his name. Hashtags like #FreeRaif have soared on Twitter, but what has been the impact? (11.09.2015)

The war in Syria and other security issues across the Middle East were on the agenda as Germany's foreign minister met his Saudi counterpart in Berlin. Steinmeier also raised the issue of human rights in Saudi Arabia. (10.08.2015)

At the Global Media Forum, DW has honored four international online activists with the prestigious Bobs Awards. In a bittersweet ceremony, it also bestowed its first Freedom of Speech Award on Saudi blogger Raif Badawi. (23.06.2015)

In a prize ceremony at the Global Media Forum in Bonn, Germany, on Tuesday, June 23, 2015, Deutsche Welle celebrated the winners of it annual prize competition "The Bobs – Best of Online Activism". (23.06.2015)

Raif Badawi's wife: 'I am fighting for my husband'

Ensaf Haidar has made the battle for the release of her husband from prison her life's work. The wife of Saudi blogger Raif Badawi is passionate about the challenge, even in the face of opposition from her own family. (23.06.2015)

Despite international pressure and efforts to secure his release, this week marks the ninth anniversary of the Saudi dissident's arrest.