′Most important prize ever awarded by the Bobs′ | World | Breaking news and perspectives from around the globe | DW | 23.06.2015

At the Global Media Forum, DW has honored four international online activists with the prestigious Bobs Awards. In a bittersweet ceremony, it also bestowed its first Freedom of Speech Award on Saudi blogger Raif Badawi. 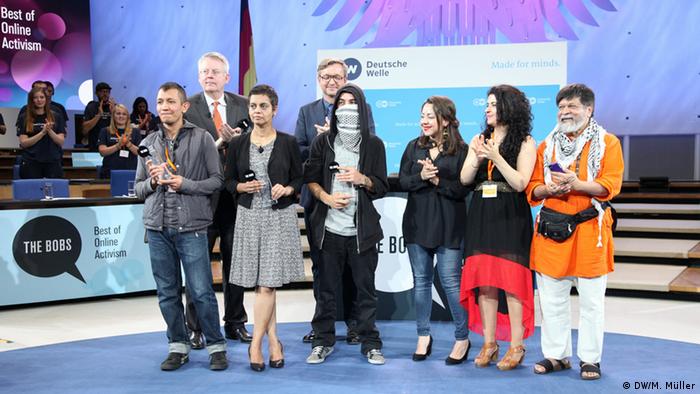 As if to underline the urgent relevance of DW's newly created Freedom of Speech Award, its inaugural recipient could not make the trip to Germany to accept it.

Raif Badawi, a 31-year-old blogger from Saudi Arabia was sentenced to 10 years in prison, 1,000 lashes and a heavy fine for promoting liberal ideas and criticizing Islam online in May 2014. His case, his conviction and his public flogging in the Saudi city of Jeddah in January caused international outrage and sparked a global campaign for his release.

Deutsche Welle, which had awarded Badawi its first Freedom of Speech Award in February, honored him during its traditional Bobs Awards ceremony at the Global Media Forum in Bonn.

In his poignant award presentation remarks, Jochen Wegner, editor-in-chief of zeit.de, minced no words, calling the flogging part of Badawi's sentence "torture" and describing Saudi Arabia as "schizophrenic." While Wegner labeled the ceremony honoring Badawi as "among the most bitter," he also left no doubt as to its gravity and value. "This is the most important prize the Bobs have ever awarded." 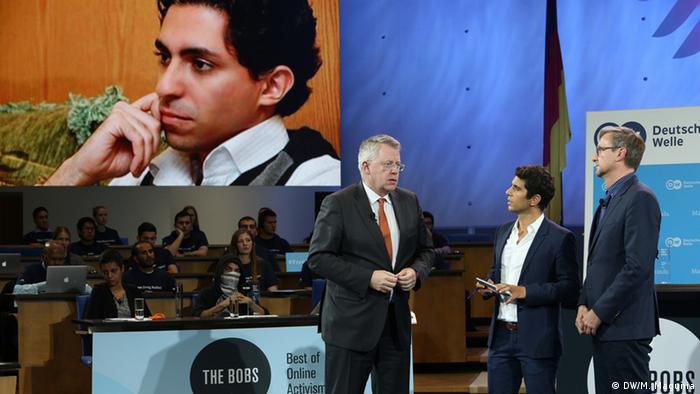 Badawi's continued efforts to advocate on behalf of freedom of expression even after having been arrested on suspicion of apostasy in 2012, a crime punishable by death in Saudi Arabia, made him into much more than just a fighter for free speech, noted Wegner. "He is also a champion of secularism and of the separation of church and state."

But it is not just Badawi, a co-founder of the Saudi Liberal Network, who is paying dearly for his refusal to keep quiet. His wife Ensar Haidar, under increasing pressure even from family members back home for defending her husband, had to flee Saudi Arabia three years ago. Since 2013 she has been living with the couple's three children in Canada, where they have been granted asylum. Haidar, from her Canadian exile, continues to advocate relentlessly for her husband and his release.

In a video message for the Bobs ceremony, Ensar Haidar thanked Deutsche Welle and Director General Peter Limbourg for awarding her husband the Freedom of Speech Award and issued a strong message to the international community, politicians and human rights groups.

"Please do not forget Raif! His fate and that of his children is in your hands."

Taking a page from Raif Badawi and Ensar Haidar's struggle, Wegner appealed to the audience. "I very much hope that many journalists and activists try to live up to his example and do not cease dedicating themselves to defending the right to free speech."

He also called on Saudi King Salman "to display his mercifulness" and pardon Badawi.

Wegner's hope to be able to hand the award to a free Raif Badawi was shared also by DW's director general. "I hope I can give this prize to Raif Badawi soon," said Limbourg, who vowed that DW will keep following the Badawi case closely: "The most important thing we can do is to continue to report about his story."

That Saudi Arabia's repression of freedom of speech is not an international outlier was highlighted by another recipient of a Bobs Award: Rafida Bonya Ahmed from Bangladesh. She received the Bob Award in the Social Change category. Her case in some aspects eerily echoes that of Raif Badawi and Ensar Haidar. 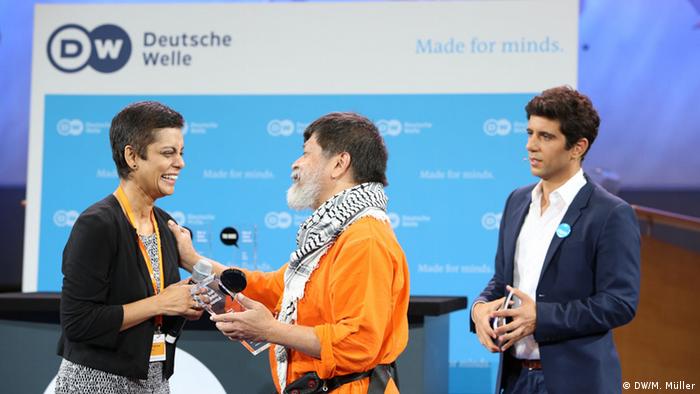 Rafida Bonya Ahmed was presented with a Bob Award

Ahmed's husband Avijit Roy, a prominent advocate of freedom of speech in Bangladesh and the founder of the "Mukto Muno" blog, was brutally slaughtered in February of this year. Ahmed herself was severely injured in the attack that claimed her husband's life.

Despite her husband's death and her injuries, Ahmed has refused to be silenced by the religious fundamentalists behind her husband's murder. She continues his work on "Mukto Muno," a key Internet outlet that reports with a journalistic and critical approach on secular and scientific issues.

"My husband would be very happy to have received this award," said Ahmed. Asked how she is coping with her husband's death, her own injuries and the dangers she is facing for continuing his work, she answered: "I am not worried about myself. I am worried about the bloggers in Bangladesh." In the last six months, three secular bloggers were killed by religious fundamentalists in that country.

Another Bob Award, the winner in the category Arts and Media, went to a team of independent media makers for creatively highlighting the plight of refugees caught in the middle of the Syrian civil war. "Zaytoun, the little refugee" provides an up-close view of life in Syria that is often overshadowed by reporting on the war. 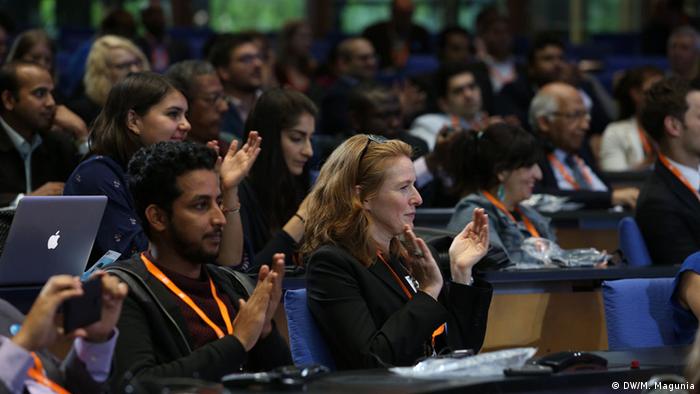 The audience issued an appeal for freedom of speech

The fourth and final Bob Award presented at the Global Media Forum honored the work of "Rancho Electronico," a Mexican volunteer collective dedicated to increasing the awareness and understanding of digital technology and the protection of privacy. One of their achievements is having created a hacker-space in Mexico City along with social media to engage with women and marginalized populations on steps they can take to overcome the digital divide in that country.

This year's Bobs Awards ceremony closed with a joint appeal by the attendees of the Global Media Forum for the release of all imprisoned online activists worldwide.

Media, politics and the digital age

What's the effect of social media on politics? How is the Internet-driven 24-hour news cycle changing media? These issues will be discussed at the 8th Global Media Forum, which kicks off in Bonn on Monday. (22.06.2015)

Although the Bangladeshi authorities have yet to establish the motive behind the murder of blogger Avijit Roy, his wife claims religious fundamentalists killed her husband because of his writings. (27.04.2015)