The war in Syria and other security issues across the Middle East were on the agenda as Germany's foreign minister met his Saudi counterpart in Berlin. Steinmeier also raised the issue of human rights in Saudi Arabia. 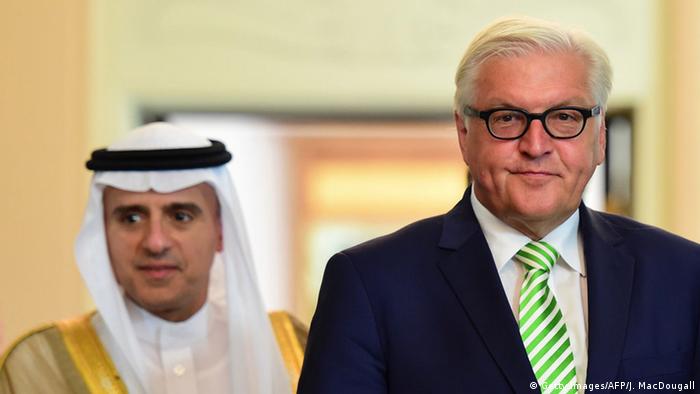 During talk with Saudi Foreign Minister Adel al-Jubeir on Monday, Germany's Steinmeier said his impression of the current political situation regarding Syria indicated that Russia, the United States and much of the was prepared to work towards ending the conflict that has ravaged Syria since 2011. Both Germany and Saudi Arabia have pushed for a solution that would see the ouster of Syrian President Bashar al-Assad.

"After five years of civil war and far too many deaths, it is our responsibility to find a path that, at least in the medium-term, leads to a political solution and, hopefully, to a defusing of the situation in the short term," Steinmeier said.

Jubeir added that it was important for the conflict to end before it led to the complete collapse of Syrian institutions and infrastructure. After visiting Berlin, the Saudi minister is scheduled to travel to Moscow, one of Assad's few remaining allies, to discuss potential solutions to the Syrian civil war.

The Syrian civil, which began in March 2011, has killed more than 250,000 people, wounded more than 1 million and driven millions more from their homes, according to the United Nations.

No early release for Badawi

Steinmeier and Jubeir also discussed the case of imprisoned Saudi blogger Raif Badawi, who was sentenced to a heavy fine, 10 years in prison and 1,000 lashes for insulting Islam. Jubeir said the case was a domestic affair and that Saudi Arabia "would not tolerate any outside interference" in the matter.

Badawi's case has gained international prominence and put pressure on Saudi Arabia, a key Western partner on many issues related to the Middle East, to ease restrictions on freedom of the press and freedom of expression. Badawi won DW's 2015 Freedom of Speech award. Badawi has received the first 50 of his lashes - the rest have been delayed for health reasons.

Steinmeier said Saudi Arabia had made progress in its approach to human rights. "Naturally, we are hoping and pushing for a humanitarian solution," Steinmeier added.

US Secretary of State John Kerry said he has agreed with Russia on a draft UN resolution to identify those behind chemical weapons attacks in Syria. An attack in August 2013 killed hundreds of civilians. (06.08.2015)