From Badawi to Khashoggi: Freedom of speech in Saudi Arabia

The face of imprisoned blogger Raif Badawi is a symbol of Saudi Arabia's repression of free speech. His iconic image has now been joined by others who have been imprisoned — even murdered — for expressing their views. 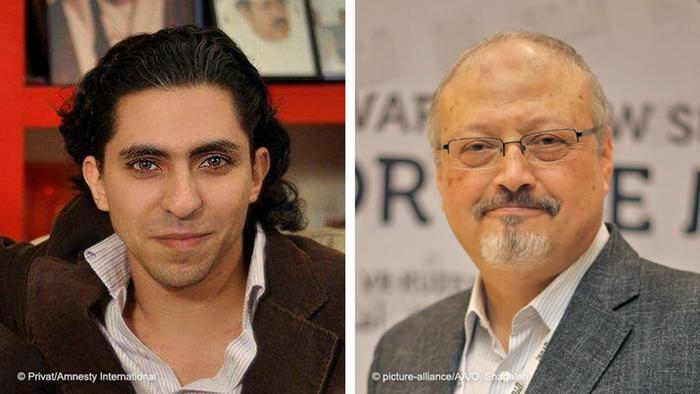 It has been almost seven years since blogger Raif Badawi, the first recipient of DW's Freedom of Speech Award, was imprisoned in Saudi Arabia. Freedom of expression was — and still is — a criminal offense there.

A Saudi blogger, Badawi was arrested in Saudi Arabia for "insulting Islam through electronic channels." In 2014, he was sentenced to ten years in prison and 1,000 lashes, 50 of which he has already received.

"There are no important updates," Ensaf Haidar, Badawi's wife, replied when asked recently if she had any news related to her husband.

In the years following his arrest, Haidar fled to Canada with their three children. Since then, she has been meeting with world leaders, including Canadian Prime Minister Justin Trudeau, asking them to push for his release. Her efforts have cemented Badawi's image and the story of their family's plight as a symbol of how Saudi Arabia oppresses its people and criminalizes all forms of expression and dissent."It's not fair that our father is in prison. He hasn't killed anybody. He just created a blog," said one of Badawi's children in an online video that has garnered almost 800,000 views. Unfortunately, there has been little news on his current condition.

Badawi is not alone in being imprisoned for his writings; his sister and brother-in-law were also arrestedfor speaking out and are currently serving prison sentences. Likewise, prominent Saudi journalist Saleh al-Shehi was sentenced in 2018 to five years for "insulting the royal court." Fahad al-Fahad, a prominent Saudi human rights activist, was sentenced to five years for content he posted on social media. They are just some of the 15 journalists that Reporters without Borders stated that were in prison in 2018.

The leader of Saudi Arabia, Prince Mohammed bin Salman, widely known as MBS, came to power through royal decree on June 21, 2017. King Salman ousted his cousin to install his then 31-year-old son as his heir.

With a change of leadership, many observers thought that the younger bin Salman would bring in reforms to modernize the ultra-conservative nation where women have little to no rights. The voices of women activists had been getting louder when he came to power, as women pushed for greater rights, including doing away with the laws regarding male guardianship and women suffrage.

Early moves that bin Salman made, such as lifting the ban on women driving and allowing them to attend sporting events, were viewed as a step in the right direction. However, others were skeptical and denounced it as propaganda coming out of Riyadh.

One of those is Madawi Al-Rasheed, visiting professor at the London School of Economics Middle East Centre. She believes that the situation has worsened under MBS.

"Since he became Crown Prince, Saudi Arabia witnessed the worst repression of journalists, writers, poets and women activists," she said. "There was no discussion anywhere of any political reform or opening up the public sphere to more debate and discussion."

But even before the ban on women driving was lifted, women activists who had spoken out for the ban to end were imprisoned, including Loujain al-Hathloul (pictured left in the tweet below with fellow imprisoned activists Eman al-Nafjan and Aziza al-Yousef). She became one of the most prominent voices in the movement after she was arrested in 2014 for trying to drive into Saudi Arabia from the United Arab Emirates (her husband, stand-up comic Fahad Albutairi, has also since been detained). They were accused of treason and collusion with foreign governments.

It is unclear how many activists have been detained since MBS took office. While some have been released, others, like al-Hathloul and writer Hatoon Al Fassi, remain in prison. Both Amnesty International and Human Rights Watch have reported that the detained women have been tortured. News of their arrests and subsequent torture has led to a widespread social media campaign calling for Saudi Arabia to #FreeLoujain and #FreeSaudiActivists.

This crackdown has led many women activists to flee the country not only to avoid arrest, but also to continue to put pressure on the Saudi leadership. One of those who fled is Omaima Al Najjar, who now lives in Europe. Like other activists in exile, she uses social media to spread the word about the situation women face in Saudi Arabia, especially those behind bars.

"My role as an activist is to speak up against the violations of human rights," she said. "I believe that those who are in Saudi Arabia are too afraid to speak at the moment, especially after the arrests of the female activists."

He never came out

On October 10, 2018, Jamal Khashoggi, an exiled Saudi columnist for the Washington Post and a long-time critic of the prince, entered the Saudi consulate in Istanbul to obtain official documents. He never came out. In the weeks following his disappearance, it was revealed that Khashoggi was murdered inside the consulate and dismembered by members of the Saudi security services. His remains have yet to be found.

The revelations surrounding his death have led to condemnation from the international community. Subsequent investigations revealed that those involved in the killing had direct relationships with bin Salman, something the prince has denied. Germany halted arms sales to the kingdom soon after the murder while US President Donald Trump has chosen to accept prince's denials.

"I knew that the Saudi regime would pursue its critics but it was shocking the way that it happened," said Professor Al-Rasheed. "This glaring act of murder demonstrated just how brutal the regime can be." 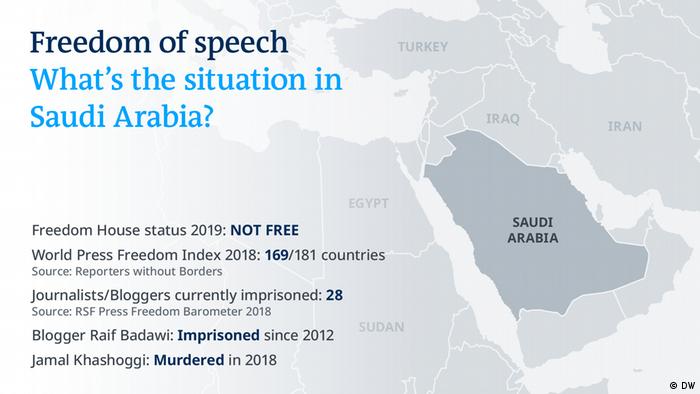 Khashoggi was one of a large group of Saudis in exile and other experts who continuously criticized the situation in the kingdom. His death while in exile has created fear among fellow activists.

"The recent events not only made it clear that there is no loosening of freedom of speech, but it was also meant to give a chilling message to activists who are inside or outside the country," said activist Al Najjar.

Khashoggi's last column was published just one week after his death. In it, he wrote how the hope that emerged after the Arab spring was soon dashed as those societies returned to their old, authoritarian ways. He went on to suggest that the formation of a "transnational" media forum could provide a "platform for Arab voices."

"Through the creation of an independent international forum, isolated from the influence of nationalist governments spreading hate through propaganda, ordinary people in the Arab world would be able to address the structural problems their societies face," wrote Khashoggi. Those would be the last words he would ever publish.

The UN team investigating the killing of journalist Jamal Khashoggi has on Monday held talks with Turkish officials. The meeting is the first of several planned for the week-long visit. (28.01.2019)

Since fleeing to Germany, Ali Adubisi has been campaigning for human rights in Saudi Arabia. Now he and his organization have published a report on the death penalty in his home country. (21.01.2019)

Jamal Khashoggi: What the Arab world needs most is free expression