On Sunday, Saudi Arabia lifted its ban on women driving. While the few women who have driver's licenses are thrilled about hitting the road, activists warned that the journey to full women's rights will be a long one. 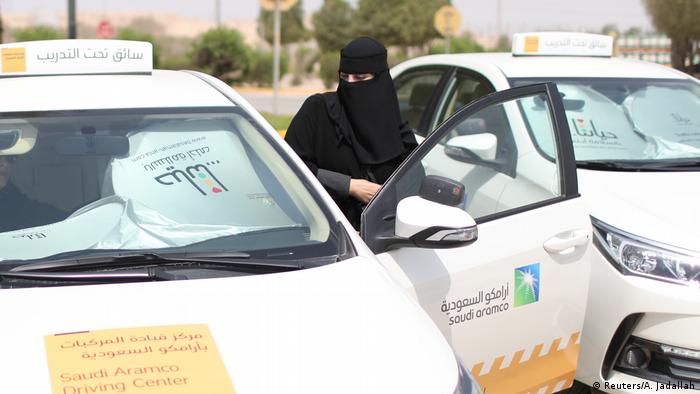 Open roads as far as the eye can see, and not an obstacle in sight. It would seem impossible to have an accident here. The vast stretch of desert outside Riyadh is the perfect place to learn how to drive.

"It really is the safest place to practice," Baya tells DW reporter Fanny Facsar, who accompanied the young woman as she honed her skills in the area before the driving ban was lifted on Sunday. "Driving schools expect a lot from us, and there is much to learn." If she passes her driving test, Baya will become one of just a handful of women who will be licensed to drive in Saudi Arabia. It is a right that women have spent decades fighting for.

On June 24, the ban on female drivers became a piece of Saudi history. Still, very few women have a driver's license — in early June only 10 had earned one. That number is set to go up soon, however. The Saudi Ministry of Culture and Information estimates that some 2,000 women will get a license over the coming weeks.

The freedom to change a tire

Women are not only spending hours in the desert polishing their practical driving skills; they are also learning theoretical and technical skills at the country's driving schools. There they learn how to change a tire, how to correctly position their hands on the steering wheel and how to accurately assess speed.

A report from Reuters news agency suggests that most instruction takes place in front of a video screen. One young student told Reuters: "The first thing I am going to do when I get my license is drive my family around. We'll drive off somewhere to celebrate." Another student wants to take her mother out for a drive as soon as she gets her license: "It will just be me and my mom in the car. I am very excited."

Read more: Women in Saudi Arabia are caught in a system of gender apartheid

Saudi women get to work - and drive

Ali Adubisi of the Berlin-based European-Saudi Organization for Human Rights says ultimately the decision to allow women to drive is part of a larger image campaign for the kingdom. Adubisi tells DW that lifting the ban is unquestionably a big step that will be very positive for women. On the other hand, he says, the government has done little more than finally give women something that should be seen as a self-evident right.

He says it would also be incorrect to assume that the government actively promoted giving women the right to drive. "The reform has far more to do with pressure and demands from Saudi society and, to a degree, the international community. That is what led to the change." Adubisi points out that women first began calling for a repeal of the driving ban back in the early 1990s.

Moreover, he adds, the right to drive is just the first of many reforms that must be made if women are to become legally emancipated. Adubisi tells DW that to this day women are still denied many fundamental rights and continue to live under the custody of men. For instance, they are neither allowed to travel nor sign contracts on their own. "Women suffer greatly under those constricts every day," says Adubisi. "Therefore, if we are going to celebrate a woman's right to drive, we must also demand they be granted other rights as well."

In many cases, however, the government still goes after women's rights activists in the old-fashioned way. That was clearly illustrated in late May, when several well-known women's rights activists were arrested and jailed. They were accused of having "suspicious contacts with foreign organizations" that supported the women's efforts. Furthermore, they were accused of recruiting "several individuals in sensitive government posts" and offering financial support to "enemies overseas."

Madeha Alajroush was among those arrested. The 62-year-old photographer and psychologist actively campaigned for a woman's right to drive back in the early 1990s. Her protests antagonized the country's conservative clerics, who called her a prostitute. All her photographic works were also burned. Madeha Alajroush, a prominent Saudi women's rights activist, was detained in May

The recent arrests, says Adubisi, were meant as a warning: "The government is sending a signal that women shouldn't make any more demands. If you aren't careful, the subtext goes, you could be put in jail just like these well-known feminists."

Nevertheless, activist Alajroush expects the country will continue to change. Several months before her arrest she told DW's Fanny Facsar that change was inevitable. "Our lifestyle is not sustainable. There can be no economic growth if half of society is not allowed to develop its potential. That is why I have always been certain that the country would change one day. It was always just a matter of when. I myself have been waiting 30 years for change to come."

Ahead of the lift of a decades-old ban on women driving, a group of women have received their driver's licenses. The ban is due to be lifted on June 24. (04.06.2018)

Saudi Arabia's state media has said provisions are being made for driving licenses to be issued to women. The ultraconservative kingdom is the only country in the world where women are not allowed behind the wheel. (26.09.2017)

What prompted Saudi to lift ban on women driving?