Saudi Arabia has allowed female football fans into a stadium in the western city of Jiddah, marking the first time Saudi women were able to watch a game in person. The move comes as a part of wider liberalization drive. 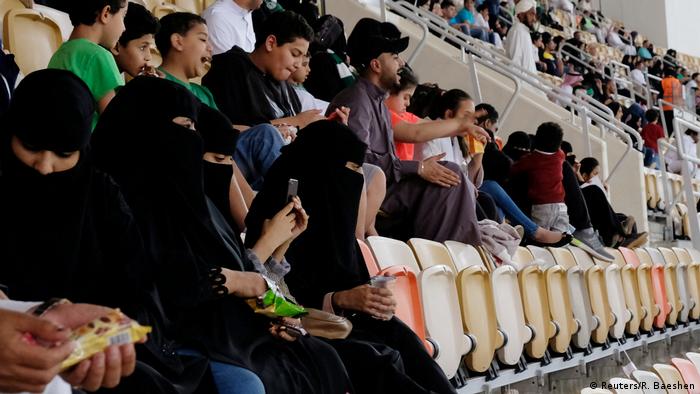 Around 300 women attended a local football game in the Saudi city of Jiddah on Friday, in a historic first for the deeply conservative Islamic nation.

The women entered the King Abdullah Stadium through a special gate, with female security guards wearing orange vests searching the visitors at the entrance. Many of the female fans wore face paint and colors of one of the two teams, Al-Ahli and Al-Batin. They were seated in the special "family section," with their male relatives, but segregated from the all-male crowd. Pictures of fans flying club colors were posted by Saudi newspaper Okaz.

"I came with my father and my brother — we're fans of Al-Ahli," said university student Areej al-Ghamdi, adding that she had always cheered the club from home."This is the first time we'll be cheering for real, not just in front of the television," she told the Agence France-Presse. "It is so much better here."

Fatimah Baeshen, the first spokeswomen to work for the Saudi embassy in Washington, also commented on the historic move.

The stadium in the capital, Riyadh, will open to women on Saturday, followed by the western city of Dammam on Thursday. 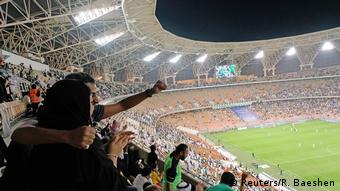 In October, the kingdom's General Sports Authority announced that stadiums in Jiddah, Riyadh, and Dammam would be altered to allow for family visits.

The arenas set up the "family sections" already used by other venues in Saudi Arabia, but also added women-only prayer areas and rest rooms.

Some women had been allowed to watch National Day festivities at the Riyadh stadium in September last year. Although the authorities made rare exceptions to let foreign women watch football games, no such exceptions had been made for Saudi citizens.

The kingdom, under the leadership of Crown Prince Mohammed bin Salman, has launched a series of reforms on women's rights. One of the changes is to allow women to drive cars, a move which is set to take full effect in June.