Women's rights in the Islamic world

Women will soon be allowed to drive in Saudi Arabia, but what about other fundamental rights? We take a look at the lamentable state of women's rights in the Islamic kingdom and other countries across the region.

Saudi Arabia announced on Tuesday that it would grant women the right to obtain driver's licenses without permission from their legal guardians. The Islamic kingdom will become the last country in the world to allow women to drive. When the new rules come into force in 2018, women won't need a male guardian in the car with them either.

It will bring an end to one of the may reasons that the strict Islamic country is subject to regular international ridicule and rebuke. In other Arab nations, women have long been allowed to drive, but that doesn't mean they enjoy the same rights as men in all social spheres — far from it.

The concept of male guardianship implies that women shouldn't make important decisions regarding their own lives, and that they need protection when out and about in the world. In Saudi Arabia, every woman must have a male guardian — her father, brother, husband, uncle or even son — who has to give his approval before the woman can travel outside the country, get married or divorced and be released from prison. This does not change if her guardian is abusive.

Women can't sign a contract without permission from their guardian either, and they are to limit the times they interact with men outside their family as much as possible. That's why many public buildings, parks and means of transportation are segregated by sex. In court, the testimony from one man equals that of two women.

In Iran, a husband can also ban his wife from traveling internationally or working, if he believes that his wife starting a job is "incompatible with the interests of the family or with his or his wife's dignity," according to the country's civil code.

In 2016, Bahrain's ministry of justice released regulations stating that women younger than 45 were not allowed to go on the Hajj pilgrimage to Mecca without a male guardian.

In Saudi Arabia, women won the right to vote only in 2015. That was also the year they were first allowed to run for "elected office" in the absolute monarchy. The first woman had been appointed as a government minister just six years earlier.

Some women in Syria were allowed to vote as early as 1949, the remaining restrictions were removed by 1953. In 2015, 12 percent of the members in the national parliament (voted in amidst the country's ongoing civil war amid very low turnout) were women. Hadiya Khalaf Abbas, who is currently the speaker of the parliament, is the first woman to have ever held the position.

In Iran, women gained suffrage in 1963, after a referendum found a majority of the Iranian people in favor of women's right to vote. A six-point reform program called the White Revolution was passed, which included suffrage and allowing women to run for office.

The dress code in Saudi Arabia is governed by Sharia law. Women must wear a loose black garment called an abaya and a headscarf when they leave the house.

In Iraq, women in urban areas wear modest western clothing, but the "Islamic State" (IS), and other Islamist fundamentalists before it, has tried to impose strict rules on what women are allowed to wear. When IS was controlling the city of Mosul, women there had to wear a Burqa, a garment covering the entire body and face with a mesh screen over the eyes. 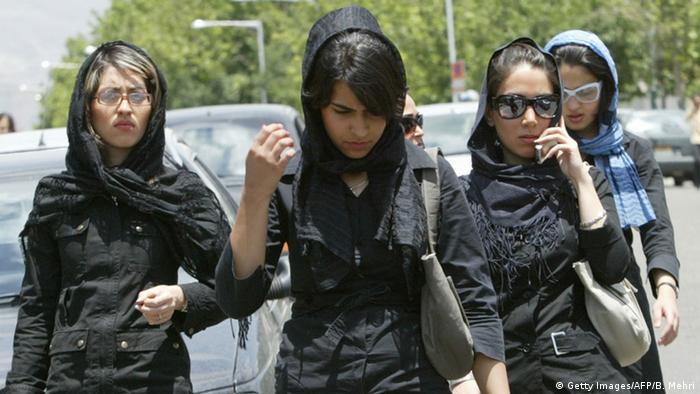 These young women in Tehran aren't afraid to wear their headscarves in a relaxed fashion. That's not possible everywhere in Iran.

In Iran, women are officially supposed to wear either a chador (a black, shapeless garment covering the whole body), or a headscarf, long pants and a long-sleeved, lightweight coat called a manteau. In conservative, often rural areas, these rules are strictly observed. But on the streets of big cities like Tehran, women wear shorter manteaux and pull their headscarves back to show their hair.

In somewhat more westernized countries like Tunisia and Egypt, there is no official dress code for women, but dressing modestly, covering knees and shoulders, is expected.

In Saudi Arabia, a man can have several wives, but a woman cannot have several husbands. Marriages are often arranged by family. In 2005, forced marriages were banned, but marriage contracts are still between the husband-to-be and the father of the bride, not the bride herself. A man can divorce a woman by saying "I divorce you" (Talaq) three times, or indeed by sending a written note. That process was recently outlawed in India. For a woman, it's a slower and much more difficult process in which the husband has to consent to the divorce. Also, women getting divorced automatically lose custody for daughters who are older than nine and sons who are older than seven to their soon-to-be-ex-husbands.

In Syria, a country with secular as well as religious courts, marriage contracts are also signed by the future husband and the father of the bride. A woman can apply for a divorce through the judicial system. In order to be granted one, she has to prove that her husband either abused her or neglected his duties as a husband.

Morocco recently updated their family law, built around the Moudawana, or family code. It now allows divorce due to "irreconcilable differences" for both men and women. But there are still traditional rules as well. The case of 16-year-old Amina Filali made headlines in 2012 when she killed herself after being forced to marry her rapist, who evaded prosecution this way. However, her case ultimately led to Morocco repealing the law allowing rapists to avoid prosecution by marrying their victims.

Saudi Arabia has announced it will allow women to get a driver's license without permission of a legal guardian. Learn about some other milestones women in the Islamic kingdom have reached through the years. (27.09.2017)

Kenya: A close finish to a historic race