Turkish authorities have suggested that a missing Saudi journalist was murdered by a special hit squad inside Saudi Arabia's consulate in Istanbul. The prominent commentator was last seen entering the diplomatic mission.

Turan Kislakci, a friend of Khashoggi who heads the Turkish-Arab Media Association, told DW that the journalist "was killed because of his opinion about the wars in Yemen and Syria."

"The Saudi government isn't comfortable with him. So they tried to get rid of him," Kislakci said. "He was murdered inside the consulate, and we assume that he was cut into pieces, they put his body parts in bags, and left."

Turkish President Recep Tayyip Erdogan, however, said he still hoped for a positive outcome to the the matter, adding that he was personally monitoring the case.

Erdogan told reporters he was awaiting the results of the probe into Khashoggi's disappearance.

The Washington Post, for which Khashoggi wrote, cited unnamed sources to report that Turkish investigators believe a 15-member team "came from Saudi Arabia" to kill the man. "It was a preplanned murder."

Agence France-Presse was told: "Based on their initial findings, the police believe that the journalist was killed by a team especially sent to Istanbul and who left the same day."

Saudi Arabia's consul-general rejected claims about a possible abduction, telling Reuters that his country was helping search for Khashoggi.

Khashoggi disappeared after entering the diplomatic mission on Tuesday. Saudi officials insisted he left the building, but Turkey's government said all evidence suggested he was still inside.

"A journalist disappearing like this in a secure country like the Republic of Turkey is something that will be followed up with sensitivity," ruling party spokesman Omer Celik said, according to the Anadolu news agency.

The Washington Post's editorial page editor Fred Hiatt said in a statement: "If the reports of Jamal's murder are true, it is a monstrous and unfathomable act."

"Jamal was — or, as we hope, is — a committed, courageous journalist. He writes out of a sense of love for his country and deep faith in human dignity and freedom." 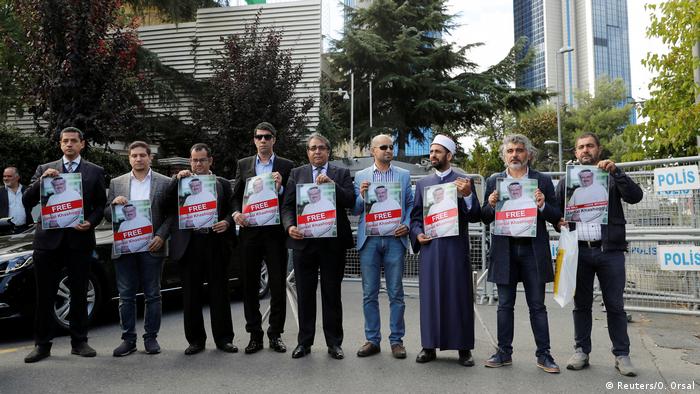 Khashoggi has lived in self-imposed exile in the US since 2017 fearing arrest for his critical views of Saudi Crown Prince Mohammed bin Salman. In columns published by The Washington Post, the 59-year-old has spoken out against the kingdom's policies toward Qatar and Canada, as well as the Saudi-led intervention in the Yemen conflict.

He had visited the Saudi consulate to obtain an official document for his upcoming marriage to his Turkish partner. Human rights groups have since urged Riyadh to shed light on Khashoggi's whereabouts.

"This is an example of what autocratic or dictatorial regimes can actually do to critical journalists, not just in Saudi Arabia," Onderoglu said. "We really hope this will not turn into a murder case."