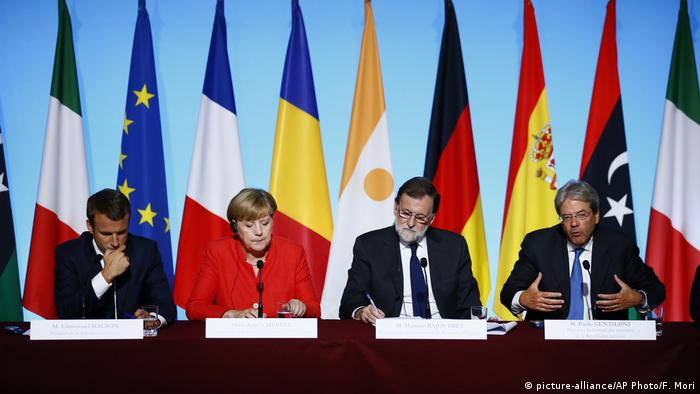 Among the options on the cards were using development aid to create more opportunities in migrants' own countries and the possibility of legal application processes for those suffering on humanitarian grounds.

The leader of Libya's internationally backed government, Fayez Serraj - whose country is on the migration route for most would-be arrivals to Europe - was present along with the presidents of Niger and Chad, whose nations are often used by migrants for the transition north.

European nations are keen to offer development aid and funding to their African partners in return for help in stemming the flow of economic migrants and asylum seekers.

In July, the EU offered 10 million euros ($12 million) in aid to Niger to combat illegal immigration.

Meanwhile, French President Emmanuel Macron has proposed the establishment of "hot spots" in Africa where asylum seekers could make requests to travel to the EU without taking illegal smuggling routes.

While Merkel said she basically supported the creation of legal migration routes, she stressed at the summit that hot spots should be only for those fleeing on humanitarian grounds. "It can only work when a distinction is made from those who go to Libya to get to Europe for economic reasons," she said.

Legal migration would have to be coupled with an end to illegal migration, said Merkel, adding that this was "very, very important."

Poverty as a driving factor

Issoufou said it was important "to find alternatives for the smugglers to leave criminal activity," such as commerce or farming.

In terms of security, the European leaders agreed to help Chad and Niger to secure their borders.

Some 125,000 migrants have crossed the Mediterranean by boat this year, according to UN figures, with the vast majority arriving in Italy before moving on to other EU members. An estimated 2,400 have died en route.

Migrants are often put on unseaworthy vessels by people smugglers and, while many are rescued, a large number perish at sea.

Green politician and Tübingen Mayor Boris Palmer takes a contentious stand on refugees in his new book, saying Germany won't be able to help everyone. He tells DW why fears of the German public should not be dismissed. (24.08.2017)

Libya is a poor, politically unstable country. That poses problems for its maritime search and rescue service, whose employees are badly paid - and see how profitable people smuggling can be. (11.08.2017)

Germany has seen a huge rise in sales of electric heaters as the winter draws nearer. Many fear there will not be enough gas around to heat homes.