Two German pre-election surveys show Chancellor Merkel's conservatives at least level with and even well ahead of Social Democrats. Their new-hope candidate Martin Schulz may have lost momentum. 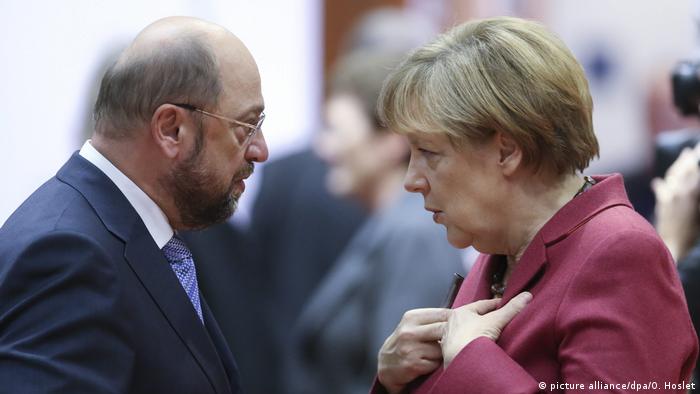 Read: The pros and cons of Merkel's grand coalition in Germany

The mass-circulation daily "Bild" ran results from theInsa research institute showing the Social Democrats (SPD), led by Schulz, on 32.5 percent - eleven percent up on its low in January - before the former EU parliament president emerged as challenger.

Forsa, the other research institute, relegated Schulz's SPD to 29 percent - down three percent - in the wake of its defeat in last month's Saarland regional election won substantially by its incumbent premier and Merkel ally, Annegret Kramp-Karrenbauer.

Nationwide on Tuesday, Merkel's conservatives had surged ahead to 36 percent - a gain of two percent, said Forsa.

Last Sunday, a third pollster Emnid had placed the SPD and conservatives equally on 33 percent.

Merkel ahead as preferred chancellor

Voters, when asked by Forsa who was their preferred chancellor, answered: 42 percent for Merkel and 31 percent for Schulz who wants his party to focus on social justice.

Forsa's chief analyst Manfred Güllner said Schulz and the SPD had only weeks to remedy its apparent dent in voter support ahead of next month's election in the northern state of Schleswig Holstein and North Rhine-Westphalia (NRW), Germany's most populous region.

At federal level, the SPD is currently partner in Merkel's conservative-led cabinet.

Two SPD veterans, former chancellor Gerhard Schröder and Hamburg city-state's mayor Olaf Scholz warned their party not to repeat suggestions made in Saarland of a future coalition with the ex-communist Left party.

He was told, however, by another NRW-based conservative, former CDU general secretary, Ruprecht Polenz that it was merely a "populist snap idea."

Opposition parties on back foot

Both the Insa and Forsa surveys recorded sizeable declines in past levels of support for the populist far-right Alternative for Germany (AfD), the Left and the Greens.

Insa put the AfD and the Left each at 9 percent, and the Greens and liberal Free Democrats each on 6.5 percent.

Forsa's sampling of 2504 voters saw the Left on 9 percent, the AfD on 8 percent, the Greens unchanged on 7 percent and the FDP hovering at the 5-percent threshold that decides whether a party can enter the federal parliament.

Germany's federal Bundestag election is due on September 24.

The co-chief of the Greens has accused Germany's government of complying with the Turkish regime's crackdown on liberties. Cem Özdemir also says Foreign Minister Sigmar Gabriel needs to stop deportations to Afghanistan. (26.02.2017)

Having lost all its seats at the last election, the Free Democratic Party is plotting its return to the Bundestag. New party chief Christian Lindner is optimistic of the party's chances in September. (31.03.2017)

Honduras: First migrant caravans of 2021 depart for US 0m ago