Chancellor Merkel's party has beaten its rival Social Democrats in their stronghold in North Rhine-Westphalia, projections showed. NRW is seen as a test of national mood ahead of Germany's federal election in September. 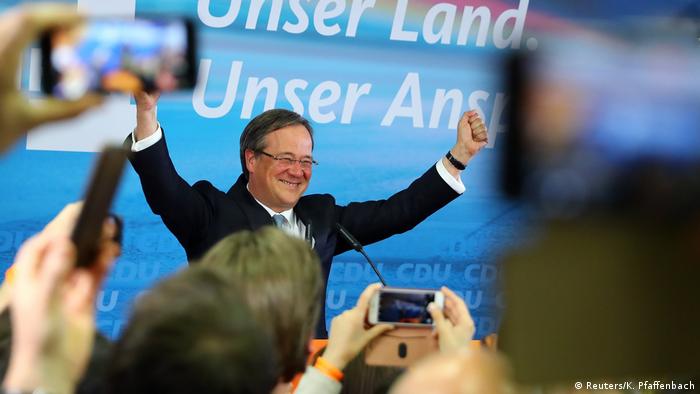 The polls showed the Social Democrats (SPD) coming in second, garnering 31.2 percent of the vote in its stronghold state, down over 7 points from the last election in 2012.

The business-friendly Free Democratic Party (FDP), looking to re-enter the German parliament this fall, came in third in NRW, taking 12.6 percent of the vote, a significant increase compared to 2012.

The populist Alternative for Germany (AfD) will also enter North Rhine-Westphalia's parliament for the first time, picking up 7.4 percent. 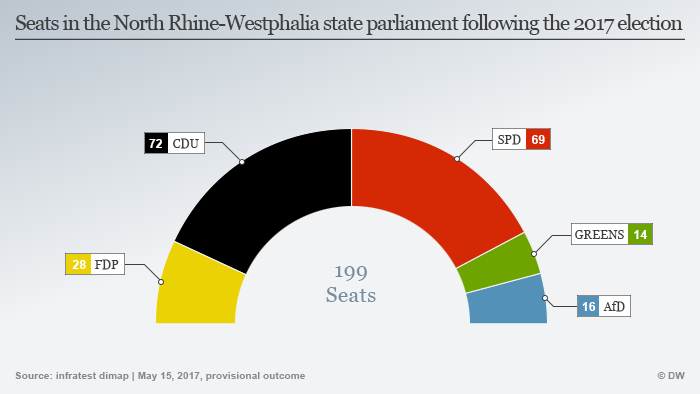 Read more: '10 things you need to know about the AfD'

The Green party, currently the junior coalition partner to the SPD, took a massive hit, dropping down to 6.4 percent.

The Left Party, meanwhile, failed to clear the 5-percent hurdle to enter the state parliament, with results showing the party at 4.9 percent.

"This is a great day for North Rhine-Westphalia," said the CDU's top candidate, Armin Laschet (pictured above), who will most likely become the next state premier. "We accomplished our two goals: defeating the SPD-Greens coalition and becoming the strongest party in the state."

Voter turnout was markedly higher than five years prior, officials said, with 65.2 percent turning out to cast their ballots. 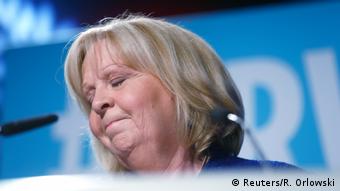 "I gave it my best. I am convinced that for the past seven years, step by step, we have helped this state move forward," Kraft said in the state capital, Düsseldorf. "This was a committed election, but it wasn’t enough."

"We couldn't gain the trust of voters," she added.

Martin Schulz, the SPD's chancellor candidate looking to unseat Merkel in the national election in September, weighed in on his party's defeat. "This is a hard day for the SPD and for me personally. I hail from the state where we just suffered a crushing election defeat."

Support for the SPD surged following the announcement of Schulz's candidacy earlier this year, but the so-called "Schulz effect" has tapered off in recent months.

"I haven't even been head of the SPD for 100 days, I'm not a magician," Schulz admitted on Sunday.

Christian Leye, the Left Party's top candidate in the state, noted that "the Schulz train derailed in North Rhine-Westphalia."

Marcus Pretzell, the AfD's regional head, celebrated what he called "a real punch to the nose" for Kraft and hailed the Green party's low result as well.

A win for the CDU in North Rhine-Westphalia will give serious momentum to Merkel and her party in the lead-up to the German national election in September.

The CDU already regained power in the Saarland state election earlier this year, and ousted the SPD in the northern state of Schleswig-Holstein last weekend.

The populist, anti-immigrant AfD party will now enter the NRW parliament, meaning the party is now in 13 out of Germany's 16 state parliaments. 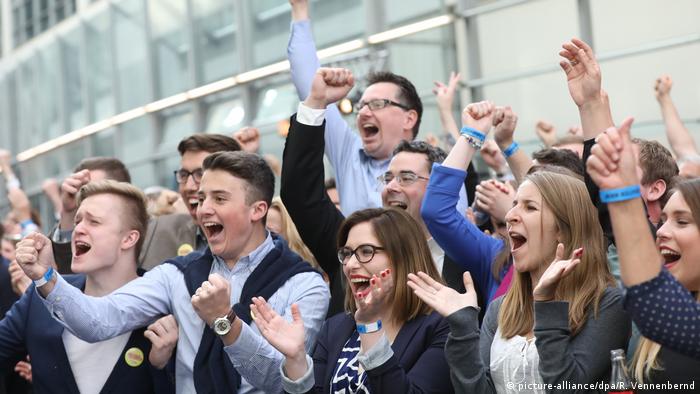 With the FDP's double digit success and the Left Party's chances of making it into parliament slim, the CDU could form a narrow center-right majority with the FDP.

The other likely option is for a "grand coalition" with the SPD that would mirror Merkel's national government, with the SPD as the junior partner.

Over 13 million of NRW's 18 million residents were eligible to vote in Sunday's election - the most registered voters than any other German state.

With its sprawling industrial region and support from workers, NRW had been an SPD stronghold for decades.

The center-left party has ruled NRW for 46 of the last 51 years. The CDU has only been in charge for five years during that time, from 2005 to until 2010. In the May 2005 election, the CDU managed to unseat the SPD, prompting a snap federal election that the conservatives won, granting Merkel her first term as chancellor.

North Rhine-Westphalia votes: What to look for in key German state election

Winning Germany's most populous state - the last to vote before September's general election - could provide key momentum. And there are many other reasons why parties want a strong showing in North Rhine-Westphalia. (14.05.2017)

As North Rhine-Westphalia votes, security and bread and butter issues are at the forefront. Chancellor Angela Merkel rallied her party before Sunday's vote in Germany's most populous state. (05.05.2017)