Merkel plays local politics ahead of NRW vote | Germany | News and in-depth reporting from Berlin and beyond | DW | 04.05.2017

As North Rhine-Westphalia votes, security and bread and butter issues are at the forefront. Chancellor Angela Merkel rallied her party before Sunday's vote in Germany's most populous state. 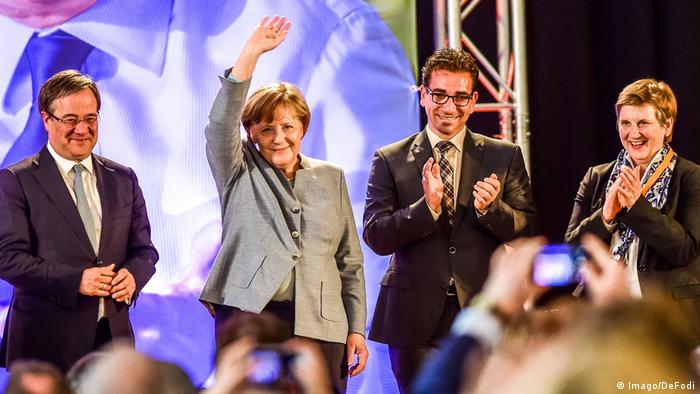 Chancellor Angela Merkel was all smiles as she was greeted by a school choir singing Beethoven's Ode to Joy in the composer's home town of Bonn on Thursday, before taking the stage to rally voters ahead of a bellwether election in Germany's most populous state.

Playing the Anthem of Europe was "pregnant with symbolism," as the Germans say, amid rising populism, anti-EU sentiment and a looming British exit from the bloc. For her conservative Christian Democratic Union (CDU) faithful and others, Merkel is an experienced, steady hand keeping Europe together in rough seas.

However, while the CDU seeks to capitalize domestically from Merkel's position on the international stage, in the end all politics is local. In an election year, Merkel and the CDU are out for votes.

The state of North Rhine-Westphalia, with a fifth of Germany's population, votes on May 14 in the last polls before national elections in September.

The outcome of the vote is viewed as a test for the CDU, and a harbinger of the party's national performance against its main challenger, the Social Democrats. It is also considered as prepping the stage for the national vote.

NRW is a traditional stronghold of the Social Democrats, led by state premier Hannelore Kraft for the past seven years in a coalition with the Greens, who have stumbled in opinion polls. 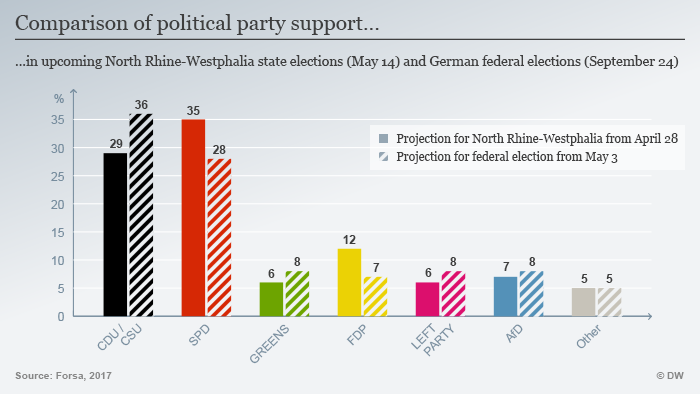 The Social Democrats received a boost early in the year after it named former EU Parliament President Martin Schulz to lead the party, raising concern within the CDU that the so-called "Schulz effect" would dent its performance.

But the Schulz effect has worn off in recent weeks, according to state and national opinion polls. In NRW, the party has dropped to  35 percent, five points less than it received in the 2012 NRW election.  Some polls put the gap between the Social Democrats and CDU at within a few points.

"We don't believe in the polls, but the trend looks good," Armin Laschet, the CDU's candidate to be state premier, told the crowd before Merkel took the stage. 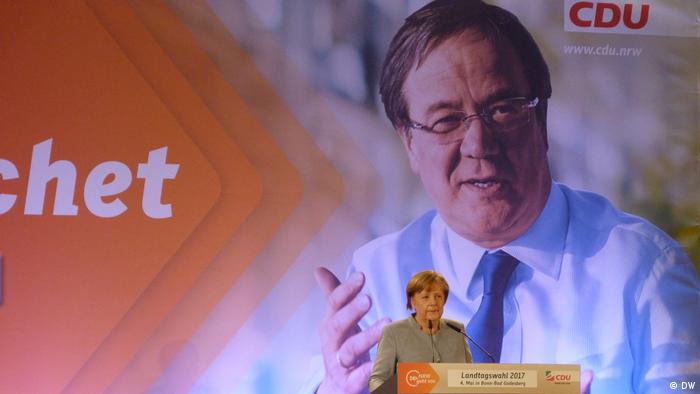 Laschet has been pounding Kraft on the campaign trail and in debates over security, education, the economy, families and traffic -- key themes of the campaign he sought Merkel's support on.

On security, Kraft is under pressure over her interior minister, Ralf Jäger, under whose watch the Berlin Christmas market attacker Anis Amri was not detained while in NRW despite warning signs. Jäger was already the target of criticism over a series of assaults on New Year's 2016 in Cologne. On top of that is the high rate of burglary and crime in NRW compared to other German states -- with very few prosecutions.

Merkel hit on security, echoing previous criticism of the current leadership in the state, and of course refugees and integration. But she spent equal time speaking on bread and butter issues, highlighting how local politics could meet voters' needs and address their concerns.

"When you know how far it is from here to the moon, then you know how many kilometers of traffic there is in NRW each year," Merkel said, poking at the campaign theme of infrastructure.

At several points she showed a side rarely seen or reported, making the crowd laugh.

"You will go home and be asked: how it was with Merkel, was it worth your time, was it full, how did she look, did she look tired from all of the travel?" she joked.

But in the end, she asked for votes and for her party faithful to rally support in the state election and beyond.

For some, the call worked.

"She gives one the courage to fight for the CDU's victory," said Maria Veandan, a woman in her 70s. "I received a handshake from Mrs. Merkel, I can't wash my hand again today."

100 days ahead of the NRW state election: What you need to know

The German state of North Rhine-Westphalia will elect a new parliament on May 14. The election is perceived as a trial run for the federal election later in the year. Here's DW's overview of what you need to know. (03.02.2017)

Germany's chancellor has attacked her Social Democrat rivals over the migration crisis and the party's stance on social welfare. Merkel has been campaigning ahead of an election in the state of North Rhine-Westphalia. (02.04.2017)