The Greens have already had to close up shop in two German states after losing regional elections in the past year. Has going mainstream been a curse for the niche party? 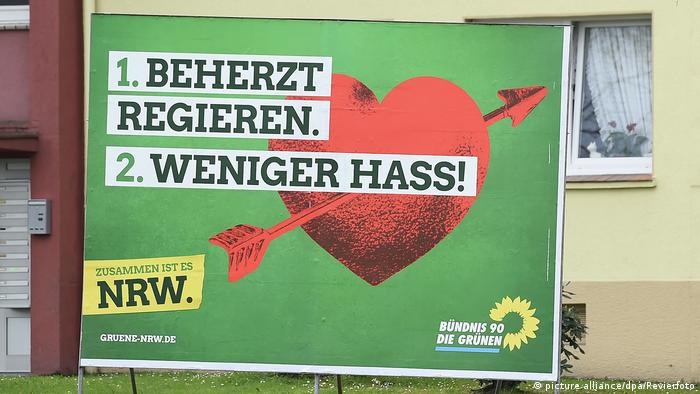 Germany's Green party (officially: Bündnis 90/Die Grünen) has had the kind of success that similar organizations in English-speaking countries can only dream of. Unlike in the US, where it is hardly taken seriously, the German Green party has been a mainstay of federal and regional politics since its 1980 founding, with leaders like Cem Özdemir some of the most recognizable faces in Berlin.

And in comparison to the UK, where the Green party has been around in some form for even longer than its German counterpart, it has one representative in parliament compared to 63 lawmakers in the Bundestag and 11 in the European Parliament.

The Greens have produced some of Germany's most famous politicians such as the renowned former Foreign Minister Joschka Fischer, and counted among its members leading cultural figures such as the legendary artist Joseph Beuys.

What accounts for the unusual success of what might otherwise be a niche party? According to Marianne Weiss, the Green's campaign manager for upcoming regional elections in North Rhine-Westphalia (NRW), "we were never just an ecological party."

She told DW that out of the peace, women's, and environmental movements of the 1960s and 70s, the German Greens managed to "from the ground up, beginning in municipal elections, build ourselves into a real political party."

And since 2011, the Greens have finally had a hand at governing in the prosperous southern state of Baden-Württemberg as senior coalition partners, discovering first hand the compromise that comes with running an ecologically-minded party in the land of Porsche and Mercedes.

The pitfalls of going mainstream

In just the past year, however, Green lawmakers have had to clear out their desks in the state parliaments of Mecklenburg-Vorpommern and Saarland after coming in under the 5 percent minimum.

The most recent surveys from the Forsa Institute, Germany's leading pollster, aren't very encouraging either - with key regional elections only 11 days away in NRW, the Green party is polling at just 6%, less than the far-right Alternative for Germany (AfD), and the libertarian Free Democrats (FDP). The latter of whom are the Greens' unlikely but fierce competitors, as they both attract the well-educated, working-age and financially comfortable.

The vote in NRW, Germany's most populous state, is key for momentum heading into September's federal elections, where the Greens are also looking at an unimpressive 6.5% according to Forsa. 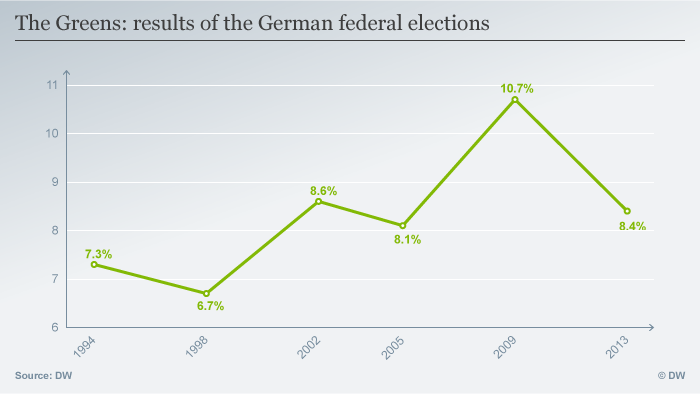 As other parties take on some of their signature issues, such as when Chancellor Angela Merkel and her right-leaning Christian Democrats (CDU), agreed to move away from nuclear power, and topics like equality for LGBT Germans and conservation become more popular among all parties, the Green party is perhaps suffering the most from the "loss of distinction" that threatens to impact every major party in Germany this election year.

But as Marianne Weiss told DW, this fact should not necessarily be viewed as a defeat. "If topics like equal rights for all or protecting the environment are embraced by all parties, then that is a good thing," she said.

"At the beginning, we were the crazy ones, talking about the environment. Now everyone is paying attention." She found it easy however to explain the difference between the Greens and the FDP.

Although they vary greatly in their policies - the FDP favor deregulation, privatization and "argue that too much environmental protection in bad for the economy" -  the two groups are rivals both in terms of demographics and for that 5 percent vote hurdle.

Better on the edge?

Another reason Weiss gave for the downward slide into possible irrelevance is that "people may be interested in conservation, but for many it isn't the most important theme for an election."

However counter-intuitive it may sound, the Greens should also consider that huge successes are necessarily in their favor. Simon W., a voter from NRW's most populous city of Cologne, who said he "could imagine" voting for the Greens argued that it's "better for them to stay niche."

"As other parties have taken up their positions on, for example, gay marriage and sustainability, they should concentrate on things that are more important to their core demographic - animal protection and agricultural policy."

Not the sexiest topics to try and win an election with, but as Simon said, "leadership doesn't necessarily work for them. Look at Baden-Württemberg, they've gone so far to the right they're just like the CDU now." 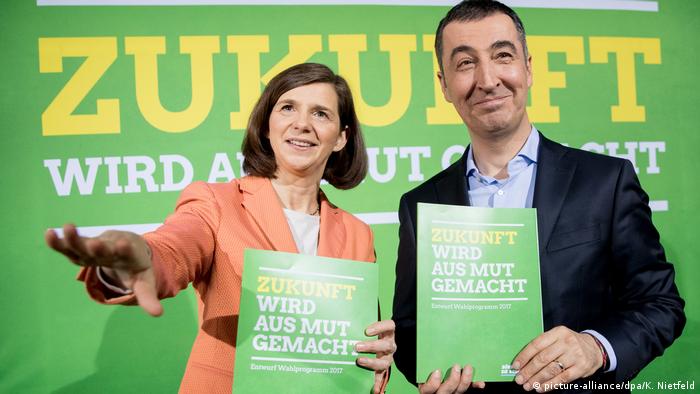 Indeed, the Greens have a fine line to walk between irrelevance on one side, and whether they have a real ability to govern on the other. So what's the final gambit to cling on to those seats in the NRW legislature?

"We don't want to spend time talking about what's wrong with other parties, but focus on what we want to achieve that the others don't... for example, making public transportation more affordable and reliable," Marianne Weiss said.

That, and going door-to-door "US canvassing style," in a move that has been mocked as desperate by some Germans on social media but that Weiss insisted "many people appreciate" for the effort it takes.

As nationalistic pessimism sweeps elections and referendum results across the West, it remains to be seen if the Green party's cheerful optimism in the face of declining poll results will be enough to claw through the already crowded ballot in NRW on May 14.

Does Germany need immigration laws? Who should be allowed to move to the country? In this year's election campaign, this issue will be addressed by every major political party. The Greens just outlined their plans. (04.04.2017)