Chancellor Angela Merkel is facing calls to cap the number of refugees entering Germany as her party gathers for its annual conference. Its executive has drafted a key resolution that makes no mention of an upper limit. 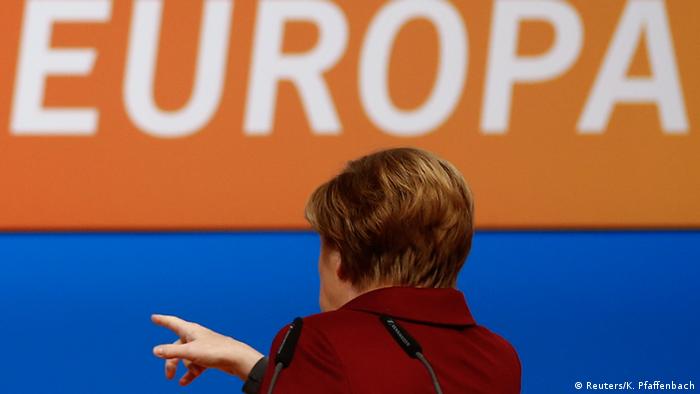 Merkel and other senior Christian Democrats (CDU) wrangled at a party executive meeting on Sunday over the wording of a key resolution on refugees to be submitted to delegates.

The German news agency DPA reported early Sunday evening that the executive had agreed on a compromise formulation along the lines that the CDU was determined to "noticeably" reduce the arrivals of asylum seekers and refugees through "effective measures," because otherwise German society would be "overburdened."

The draft resolution, to be presented to the party two-day conference which opens Monday in the southern German city of Karlsruhe, did not contain the wording "upper limit" as sought by her critics but rejected by Merkel.

The new formulation had met with "lots of approval" amongst party members who had wrestled over the text in recent days and weeks, said CDU general secretary Peter Tauber after the executive meeting.

Merkel later told the public ZDF television that she was "very happy" that the draft "confirmed" her policy of focusing on the causes of refugee flight, improvements at refugee camps in the Middle East, the need for European solutions and a functioning EU outer border.

"I'm convinced about the route I have charted," Merkel said, adding it would all take time.

Results of one survey published Sunday indicated that two-thirds of Germans want an upper limit declared for the number of refugees entering the Federal Republic via eight neighboring nations and across 3,757 kilometers of its borders.

Paul Ziemiak, the chair of the CDU's youth branch, speaking on German public radio, described a previous draft of the CDU resolution made public last Thursday as inadequate. 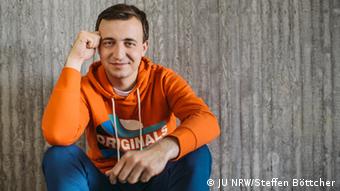 It lacked "a clear acknowledgement that Germany's possibilities in admitting refugees are finite," Ziemiak said, telling the Bild am Sonntag newspaper that any other stance was "reckless."

Merkel, who also chairs the CDU, has argued that setting a cap ignores the dynamics of refugee movements from crisis regions such as Syria into the EU wants centralized policing powers for its bordersEU's open border Schengen zone.

It was an "illusion to think that we can fix the refugee problem on the German-Austrian border," she told the newspaper Augsburger Allgemeinen on Saturday, adding that a key player was Turkey where most migrants leave on their journey towards the EU.

"Upper limits are one-sided and static," she said.

On Sunday, she again avoided the word "limit" and said the aim was a "decrease in the number of refugees via European solidarity and through tackling the causes of (refugee) flight - and not through unilateral measures by Germany." 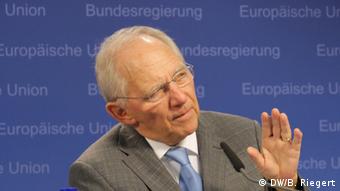 CDU veteran and Finance Minister Wolfgang Schauble had backed Merkel on Friday, telling Ziemiak's youth wing that Merkel's coalition government with the Social Democrats could not set a limit because it would then risk breaking its promises.

Schauble reiterated Germany's call that other EU member nations must help seek a joint solution to the crisis.

The refugee issue also featured at the SPD's conference held in Berlin in recent days.

A critic of Merkel's course, the premier of Saxony-Anhalt state Reiner Haseloff, said it was a question of "pure mathematics."

Haseloff said there were "totally objective limits" in how many jobs, how many kindergartens, apartments and German language courses could be offered.

"No country, even Germany, can fulfill such hope alone," he added. 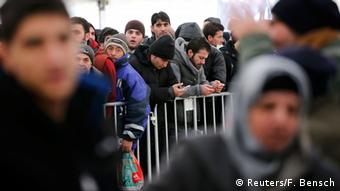 Migrants queue in Berlin waiting to be registered

At the CSU's conference in Munich last month, party head and Bavarian premier Horst Seehofer treated Merkel to a disapproving lecture on her refugee policy.

The tabloid newspaper "Bild" in its edition for Monday quoted the head of the Nuremburg-based Federal Office for the Migration and Refugees (BAMF) Frank-Jürgen Weise as saying his agency was preparing itself to handle half a million new arrivals next year.

The survey by pollsters Emnid for the "Bild am Sonntag" newspaper showed that 62 percent of Germans wanted a fixed upper limit, with 36 percent opposed.

One million asylum seekers have entered Germany this year, according to a registration system run by Germany's 16 federal states or Länder.

Federal Interior Minister Thomas de Maizìere declined to provide an estimate for 2016, but was quoted on Sunday as saying: "I'm working to ensure that the count of 2015 will be significantly less."

After getting evicted from the Greek border, thousands of refugees and migrants were relocated to former Olympic stadiums-turned-shelters in the capital. As Diego Cupolo found out, they have no idea what to expect next. (11.12.2015)

German Word of the Year 2015 is 'Flüchtlinge' - refugees

The Society for the German Language has revealed the word encompassing this year's politics the best: Without a doubt, the dominant issue in Germany was refugees. Discover the Words of the Year of the last seven years. (11.12.2015)