Shut off from the Balkan route, asylum seekers flood into Athens | Europe| News and current affairs from around the continent | DW | 11.12.2015

After getting evicted from the Greek border, thousands of refugees and migrants were relocated to former Olympic stadiums-turned-shelters in the capital. As Diego Cupolo found out, they have no idea what to expect next. 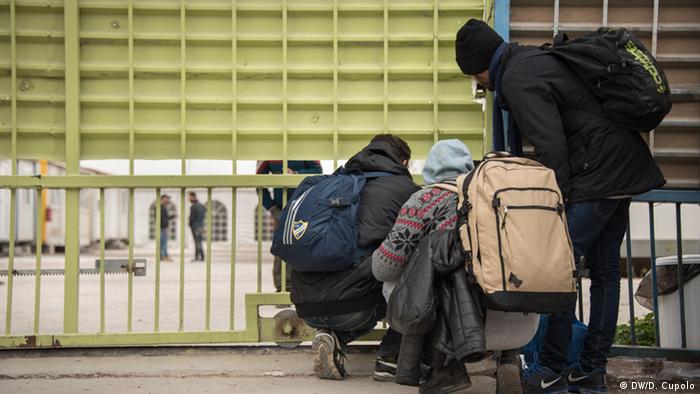 Athens has become the new center of Europe's migration crisis after receiving more than 2,300 asylum seekers in the space of two days. They had been evicted from the Macedonian border on Wednesday. The mass relocation, coupled with a daily flow of new arrivals from the Greek islands, has left humanitarian aid workers scrambling for space and supplies to house an unprecedented influx of people to the capital.

According to Katerina Mamoli, the Athens regional coordinator for Greece's Ministry of Immigration, the city's three refugee camps were at full capacity on Friday afternoon, hosting a combined total of approximately 3,000 people.

"This has been happening for five months, it is nothing new," Mamoli told DW. "Now it's a more complicated procedure because we have people from many different countries, so of course there are problems, but we are handling these problems."

Stranded in a stadium

In Athens, a site of many problems has been the former Olympic Taekwondo stadium, which was converted into a refugee shelter with a maximum capacity of 1,700, according to camp manager Koutsianas Panos. On Friday, the stadium was hosting approximately 2,000 people, many of whom were trying to do everything possible to leave the facility.

Filthy bathrooms, broken showers and constant fighting, specifically between Iranian and Moroccan males, have rendered the stadium uninhabitable for migrant families who are trying to figure out their next move after being denied entrance to Balkan states and have little to no information regarding their options in Greece. 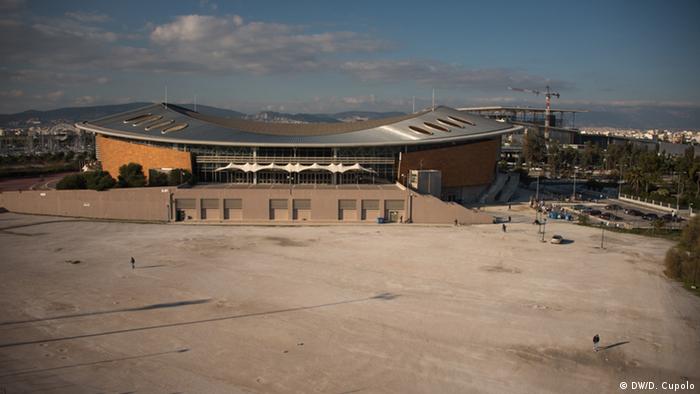 This former Olympic stadum in Athens has been converted into a refugee shelter for about 2,000 people.

Payman Qasimian, an Iranian who lived in the United States for 15 years, passed one night in the stadium with his family and said he would never do it again.

"I would rather sleep outside," said Qasimian. "It smells so bad in there and it's so cold that people are sleeping in air ducts and shower rooms just because they are a little bit warmer."

Standing in the open in the central city's Victoria Square as a light rain fell, Qasimian explained he was a permanent resident of the US, but his documents were taken by the Iranian government when he went to Tehran to get married.

"From the airport, they took me directly to jail and I stayed there for two and a half years," he said.

When asked what his charge was, he responded, "Atheism. I converted to Christianity when I was in the States."

Qasimian was released only after re-converting to Islam and immediately fled the country in an effort to reunite with his parents in Los Angeles. While his case may be unique, his problems are shared by most Iranians and migrants from so-called "non-conflict zones," who have been barred from entering Macedonia since November 18.

Now stranded in Greece, with identification papers that expire within 30 days of issuance, Qasimian must choose between three options before his documents are invalid: Apply for asylum in Greece, return to Iran or find a smuggler to take him to northern Europe.

Human traffickers frequent Victoria Square periodically and offer everything from transportation to fake documents at lucrative prices, according to Qasimian.

Passports from Afghanistan cost 1,000-1,200 euros ($1,100-$2,200), while a car ride to Austria goes for 1,500 euros per person. Qasimian said the trip required a four-hour hike across the Macedonian border, to a small village where a second relay vehicle picks up clients and completes the road journey to Austria.

Upon arrival in Macedonia, the smugglers said they would supply forged Serbian documents; the idea being that asylum seekers would be sent north to Serbia, not back south to Greece, if they were apprehended by police. 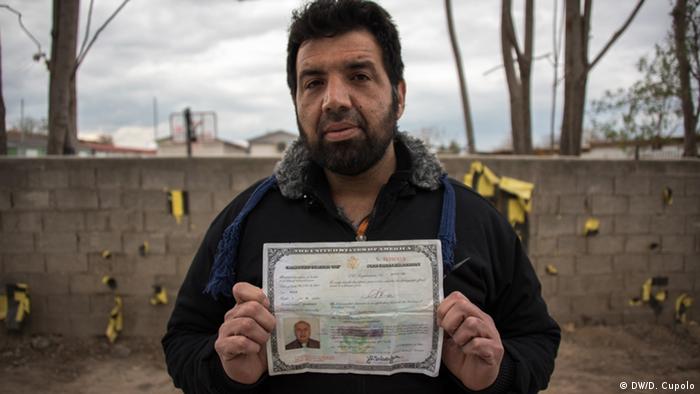 Payman Qasimian says he lived in the US for 15 years before getting arrested in Iran and fleeing to Greece.

Though some are trying out these alternative routes, for the time being Qasimian said he would stay in Athens and apply for asylum in Greece.

"I'm not going to take the chance of getting sent back to Iran after getting this far," he said. "For me, Iran means death."

Asylum-seekers became stuck in Greece when several Balkan states began filtering them based on nationality in mid-November, stranding thousands of people seeking refuge from other nations in Idomeni, a small village near the Macedonian border.

Conditions rapidly deteriorated at the border, with repeated outbreaks of violence between protesters and border police, which continued until Idomeni was cleared of all inhabitants on December 9.

Now the Greek government is looking to create permanent camps in both Athens and the Thessaloniki area to host long-term asylum-seekers for the winter, according to Greek immigration coordinator Mamoli.

Mamoli also said her ministry was working to add 600 beds to Eleonas refugee camp, which was currently hosting its limit of 700 people. The Elliniko field hockey stadium, the third camp in Athens, was also at maximum capacity Friday afternoon.

"This is a European issue, not just a Greek issue," Mamoli said.

An influx of a million refugees could cost Germany up to 55 billion euros ($60 billion) a year, according to a study by a prominent economic research center. The researchers said the financial burden was manageable. (11.12.2015)