Refugee relocation in Athens hits snags | Europe| News and current affairs from around the continent | DW | 08.12.2015

As Balkan states remain closed to people from 'non-conflict areas,' asylum-seekers stranded at the Greek border are heading back to Athens to await their fate in camps. Diego Cupolo reports from Athens. 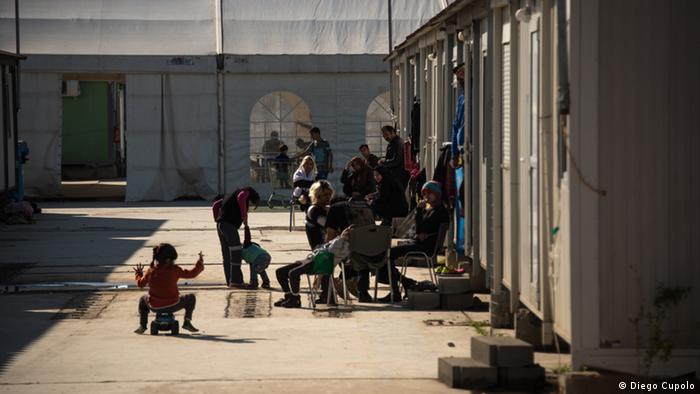 It's rush hour in the Athens metro and Bijan Mortazavi jokes with his friends as they compare the beards they grew while camping on the Greek border.

"What can I say? We stayed in the camp for two weeks," Mortazavi said. "I will go to the barber when I get to Germany."

Mortazavi and his five friends, all of them recent graduates from Iran, are heading toward an Olympic field hockey stadium turned refugee camp in a suburb called Elliniko. Until now, they had been stuck in Idomeni, a town near Macedonia that has been the site of violent riots since several Balkan states closed their borders to asylum-seekers from ‘non-conflict areas' such as Iran, Pakistan and Morocco.

Since November 18, passage to Macedonia has been strictly given to Syrians, Iraqis and Afghans, while roughly 2,000 asylum-seekers from other nations remained stuck at the border. As conditions worsened over the last week, about 150-200 people left for Athens on a daily basis, according to NGO workers at the site.

Marking a turning point in the crisis, the combination of legal and physical barriers have caused the migration tide to crest in Idomeni and partially roll back toward Athens. The capital is now receiving asylum-seekers from Turkey along with those returning from its northern border, causing concern among some of the city's humanitarian workers, and indifference in others.

'A piece of cake'

"The camp is full, we have no more space after these guys," said Kristoff, a volunteer at the field hockey stadium who did not want to give his last name. Kristoff welcomed Mortazavi's group into the once-abandoned facility and showed them to the Iranian area, where they would sleep on blankets on the floor.

The field hockey stadium is one of several drop off points for UN-funded buses returning from Idomeni and currently holds up to 400 people, according to Marios Karagiannakis, the camp's coordinator and civil servant for Greece's the First Reception Service. Single males from Maghreb and Iran make up the majority of guests and many have arrived angry and frustrated. 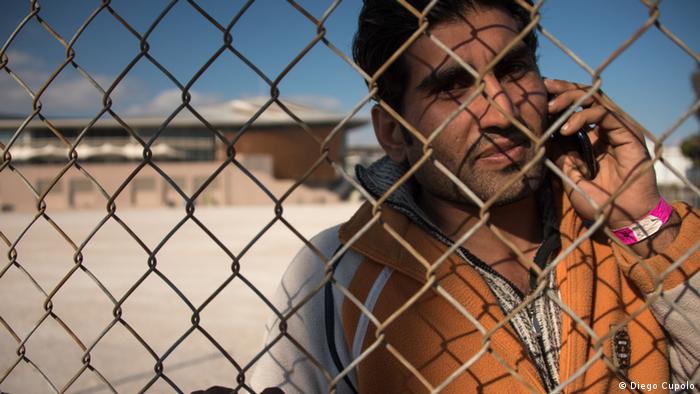 Afghan refugee Guladin Ali whose papers were ripped up during a fight with an Iranian in Idomeni.

Broken windows throughout the facility stood as reminders of tense moments from the past. Karagiannakis, with bloodshot blue eyes, answered phone calls and chain-smoked while speaking with an interpreter about a teenager who was coughing up blood - the fifth such person to show symptoms of Tuberculosis in recent days.

Running on a nightly three hours of sleep, Karagiannakis held his cigarette firmly and explained the situation wasn't as bad as it seemed.

"This is a piece of cake compared to Samos two years ago," he said. "We have a system to receive them now and everyone involved in these cases is getting more experience day by day because every day is different … we've been doing this for a while now."

Further north along the shore, another refugee camp opened last month inside the much larger Olympic Taekwondo stadium. Camp manager Koutsianas Panos said the building's maximum capacity was 1,700, but he wanted to keep numbers below 1,000 for safety reasons. On Saturday, the camp was hosting 450 people.

Koutsianas said guests were sleeping on beds on the stadium's main floor and three daily meals were being provided by the Greek Navy and independent volunteers.

"You have to treat people like people and then it's easier to manage everything," Koutsianas said, but later expressed doubts about the stadium's long-term feasibility.

"I don't think this facility is suited for this use," he said.

Media is barred from entering the facility, but an informal poll of 20 people exiting the stadium found only one to be sleeping on a mattress. The rest were sleeping on the blankets on the floor.

"I'm sick, I'm not sleeping, I'm not sitting, always I am standing," said Ahmed Abdu Mohammed, a Somali refugee staying in the camp. "I have pain in all my body."

The best camp in Greece

Trucks filled with scrap metal rumbled down dusty roads in the industrial area where Eleonas refugee camp hosts up to 750 people. With its neat rows of about 100 container-sized houses, each one with a bathroom and shower, employees at the site said it is "one of the best camps in Greece".

Last Saturday, there were 435 asylum-seekers in Eleonas, according to the camp's manager, Mahmoud Abdelrasail, who mentioned there were plans to expand the camp, but couldn't provide more details.

"Before we would be full and 300 people had to sleep outside the camp because we didn't have anywhere else to go," Abdelrasail said. "Now, if more people come, we have many spaces in the other camps and we can open more stadiums if we need to in the future." Since it opened in August, it has has hosted 9,725 people.

Those who can afford to usually avoid the camps altogether and stay in hotels. Alternatively, several anarchist squats in Athens and Thessaloniki are providing shelter for asylum-seekers. Yet not all are willing to spend time in Greece. 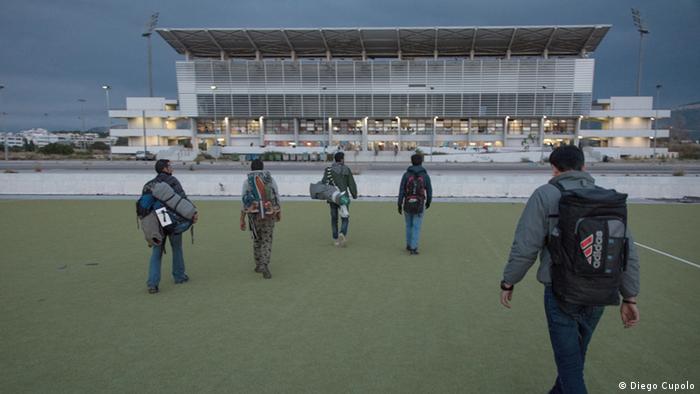 Bijan Mortazavi and his friends arrive at the Olympic Field Hockey stadium. Angry and frustrated, he says he's going back to Iran

On a weekend morning Mortazavi sits with his friends in Athens' Victoria Square among drunks, gypsies and panhandlers as he weighs his prospects.

"It is a hard life in Europe," he said. "Water costs money. Sleeping costs money. For everything, you need money … and there are no jobs in Greece."

Mortazavi said he was speaking with smugglers who offered transportation to Germany for 1,000 euros ($1,087) per person. Other people in the square were selling fake Syrian documents for 150 euros. Mortazavi said his friends would continue trying their luck to reach Northern Europe, but the options did not appeal to him.

"It will not work," he said. "They will catch us and send us back. I'm going back to Iran."