At Greece's northern border, a tiny settlement is the final stop in the country for hundreds of thousands of refugees on their way to Europe. Omaira Gill reports from Idomeni, population 154. 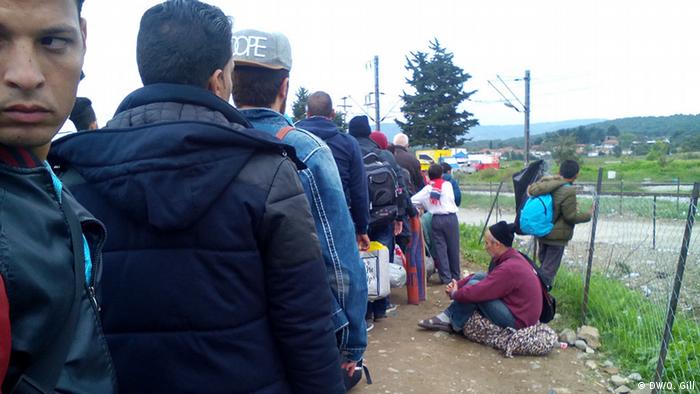 Idomeni is a small village sitting within comfortable walking distance of Greece's border with Macedonia. The 2011 census put its population at just 154 inhabitants. The locals themselves tell you there is nothing remarkable about the place, except for the stream of refugees flocking to this outpost to cross into Macedonia.

Yiannis Panagiotopoulos, an Athenian taxi driver recently ferried a newly arrived group of Syrians from Athens to Idomeni. "They were so well dressed. I asked for 1,000 euros expecting them to protest, and they immediately paid me in cash. The were Coptic Christians and said Saudi Arabia is giving each non-Muslim $2,000 and a smartphone to leave because they want Syria for Muslims only."

Everyone wants to get to Idomeni, and if you can't afford a taxi, there are plenty of unofficial buses that'll take you there for 35 euros ($40).

The buses are more or less an illegal operation. Certain cafes near Victoria Square sell the tickets for cash, no receipts, and the trip that should take five and a half hours ends up taking nine because of various meandering detours to avoid rumored police checkpoints.

Along the way, service stations have bumped up their prices to cash in on this unexpected windfall. At one, hot meals carry a starting price of eight euros, an extortionate amount for crisis-era Greece.

Sitting in the front of one such coach, crammed to the last seat as children sleep on coats laid in the aisle, was 34-year-old Yahyah Abbas from Aleppo in Syria. Before the war, he used to work in a cosmetics distribution company.

Now, he said, there is nothing in Syria, "only the devil." "Syria was the best country in the world. It was ruined by terrorists. I love Bashar al Assad, he is the best. But I cannot live in my country because of terrorists." Abbas has his sights set on Norway, a country he has loved since he was a child.

"The UAE is not helping. They are not our brothers. Our brothers are Germany, Norway, Holland. Saudi Arabia is supporting terrorists in my country. Why?"

Once buses get to the border, UN workers explain to the refugees what comes next

Also on the bus was Ahmad, a 25-year-old from Syria via Lebanon, who was full of enthusiasm for his future, smiling and singing constantly. He was so happy at reaching Lesbos that he swam the final 50 meters. He then spent 27 hours queuing at Moria camp for his papers to make the onward journey. "The wait doesn't tire me," he said. "I can't feel my feet anyway!"

He flicks through pictures on his smartphone of monkeys in Lebanon, kittens in Turkey and poses with the volunteers who met his boat on the island. The only topic that makes him fall silent is "Islamic State." "I don't like to talk about it," he said.

Thousands of people a day

After months of chaos and violent scenes at the border this summer the operation at the border has now fallen into an efficient routine that works "most of the time," Greek authorities say.

The border with Macedonia opens every 15 minutes to accept a group of 50-80 people. When the buses finally arrive at Idomeni, they offload passengers at a rate relevant to the pace of the crossings. Greek police issue each bus load with a number for their group which represents the order in which they will cross. They estimate that on an average day around 5,000 people make the crossing.

Volunteers meet the groups straight off the bus and direct them to food, water, toiletries, clothes and medical attention. Then, they wait in huge white UNHCR tents until their turn comes.

Kare Mossing, team leader for the International Red Cross clinic at the camp, said they mostly treat colds, respiratory problems and old war wounds. The teams work in eight hour shifts. "Recently we saw 378 people within one eight-hour shift. We have treated 2,500 people in two weeks," he said. 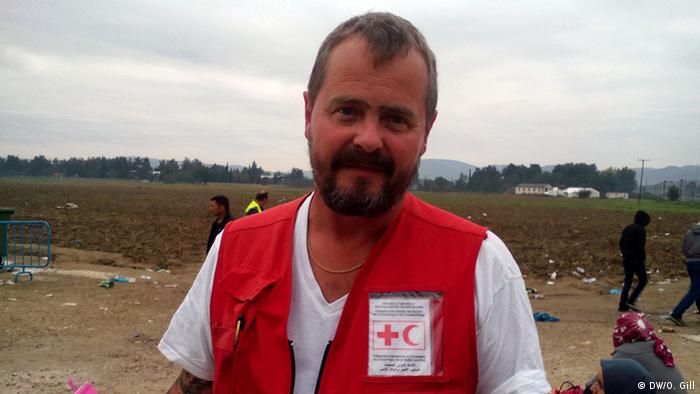 Mossing's team works with hundreds of people each day

The Greek police wait for Macedonian authorities to give them the go-ahead before the next group is allowed down an embankment near train tracks that run across the border, then on to Macedonia's Gevgelija train station. A group of Syrians waiting to cross refused to give their names, scared for the family they have left behind in Syria. "We will go anywhere," said one, pointing to his group. "We want to finish studying. I was studying economics, so was he, and this guy was a mechanical engineer."

Before painstakingly making sure no identifying details will be given about him, an older member of the group said: "There were no terrorists in my town. I left because of the regime. Anyone who tells you they support the regime is lying; they only say that because they are so scared of the consequences for their families in Syria."

Also waiting to make the crossing is Tahir Adrees with his wife Nida and sons Umar, 9, and Shamal, 3. They decided to leave when a bomb exploded very close to their house. "My younger son was normal. He was a happy boy. Now he screams all the time. I think the bomb changed his brain." Through his father, Umar describes the nightmares he sees of a man entering their house to kill them. When he grows up, Umar wants to be a teacher.

"Look, Idomeni is not a pretty place, but the whole world knows us now because of this mess," said 70-year-old Ilias Konstantindis, sitting at Idomeni's only tavern. "We help them, we offer what we can, but I don't think they're all refugees. I worry about what could happen if Muslim fanatics get into Greece."

"Well if you behave yourself nothing will happen to you," his friend at the same table said.

"There has been a war in Syria for years, why are they coming now? This is all happening because of the government's immigration policy," said Konstantindis."

"Alexis Tsipras will be in power until you die, so don't die anytime soon," the friend replied, laughing at his own joke.

Subjected to the weather

Back at the camp, a volunteer trying to keep the chemical toilets clean was at his wit's end because of the endless numbers passing through.

"I don't know what they do in their own countries but here you can't imagine the mess. I'm sick of it! We can never keep it clean even though we don't stop." He quickly shooed away a child heading for the portable shower. "Shower!" he yelled "Shower! No toilet! This is not a toilet! Toilet over there!"

Official estimates put the numbers crossing the border at Idomeni between September 20 and October 13 at 130,000. Julia Kourafa, communications officer for the aid group MSF, said the organized conditions at the camp were a recent development. "MSF was one of the first organizations here. At the beginning there was nothing here, no facilities and a few canteens for food. We provided a medical van to treat immediate problems.

"The tents and facilities have been here for one month in cooperation with the local authorities. Before that, people had to bear the bad weather, cold and heavy rain. People smugglers were taking them across the border and making them stay out in the open hiding in the fields until the crossed." 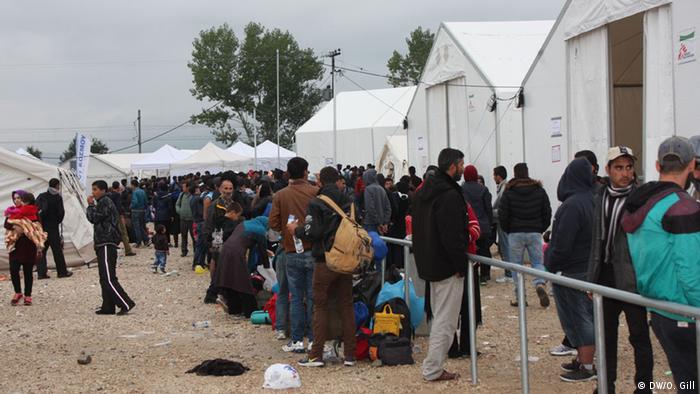 Refugees have to wait for hours to cross the border

Despite the increasingly bad weather, refugees continue to cross, topping 400,000 and counting for 2015.

After torrential rain a few weeks ago, conditions in Idomeni now are moderate, but when winter comes they will likely worsen. At this exit point from Greece, waiting for hours to cross into Macedonia will get more miserable and ultimately dangerous if adequate measures are not taken.

"There must be massive support by the European Union for Greece," UN High Commissioner for Refugees Antonio Guterres recently said. "Today's chaotic situation is totally unacceptable, very risky and unsustainable. We know how to winterize a camp. We don't know how to winterize a crowd moving every day from one country to another. With the kind of weather that you have in the Balkans, we could see this turn into a tragedy at any moment."

Opinion: Can we do this in Europe?

EU leaders haggled over money and postponed problems. Playing for time is a time-honored tradition at EU summits, but it's something Europe can ill afford in the refugee crisis, says DW's Bernd Riegert. (16.10.2015)

Angela Merkel has urged for solidarity from the EU over the handling of the migrant crisis and distribution of refugees. The call came as the German chancellor prepared to meet with her European counterparts. (15.10.2015)

Greece is setting up its first refugee hotspot to receive migrants coming into Europe from the Middle East and Africa. The center, on Lesbos, is the first of five designed to register and screen all incoming migrants. (10.10.2015)