Merkel remains cautious about handout for Greece | Germany | News and in-depth reporting from Berlin and beyond | DW | 26.04.2010

German Chancellor Angela Merkel has stressed the need for a stable European currency, urging debt-ridden Greece to implement tougher measures to get its finances in order. 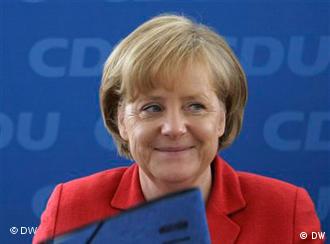 Speaking to journalists in Berlin on Monday, German Chancellor Angela Merkel was resolute in her assessment of the Greek debt crisis, and said Greece must accept tough austerity measures over a period of years to ensure the stability of the euro.

"A program must be agreed on between the International Monetary Fund (IMF) and Greece" before any concrete financial aid can be offered by the European Union, Merkel said.

Berlin's stance was criticized by Italian Foreign Minister Franco Frattini, who said he was "concerned by the intransigence" Germany was showing.

"This is not a rescue operation. This is a consolidation of Europe's walls; the walls of the euro. It's a rescue for all of us," Frattini said.

Deftly sidestepping the words "bailout" or "default", Merkel did, however, emphasize that (EU) government guarantees were "indispensable" to ensure that a Greek austerity program effectively tackled the country's massive deficit.

But, despite her attempts to reassure financial markets, investors on Monday battered Greek bonds, sending the yield, or borrowing rate, on benchmark 10-year government bonds soaring to 9.4 percent.

Euro exit 'not an option' for Greece

Chancellor Merkel said it was up to Greece to convince the world that it had a "credible" debt-reduction plan and that Germany was prepared when that became evident.

She said she had "confidence" in the negotiations Greece was conducting with the IMF and the European Union. She stressed that expelling Greece from the euro currency zone was "not an option", warning that such talk only fueled uncertainty in the marketplace.

"What we need is a quick reaction for the stability of the eurozone as a whole and everything that takes us away from this central goal is, at the moment, not an option. We do not need uncertainty, but certainty," Merkel said.

The chancellor predicted that it would be only a "matter of days" before a rescue package for Greece was nailed down.

Political rift mounts in Germany over cash injection for Greece

After debt-stricken Greece called for financial aid from the EU and the IMF, the German government is urged to impose conditions for multi-billion-euro bailout. Greece should leave the eurozone, some critics say. (26.04.2010)

Germany’s party chiefs are thrashing out details of a possible aid package for Greece. The opposition wants a new law to be passed by parliament before any rescue plan can be finalized. (26.04.2010)

As the IMF and EU meet in Washington to assemble the details of a joint aid deal for debt-tortured Greece, German and French finance ministers are saying their support will require further sacrifices. (25.04.2010)