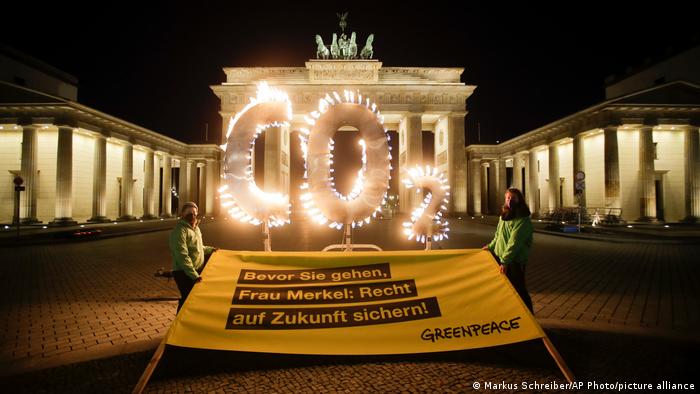 Germany's Angela Merkel, in her last climate summit as chancellor, told representatives from some 40 countries on Thursday that a carbon pricing system would help keep global CO2 emissions in check.

"From my point of view, it would be very desirable if we also had a CO2 price worldwide, which would have to be introduced step by step," she told the Petersberg Climate Dialogue, which was held online this year. Merkel initiated the Petersberg conference in 2009, after negotiations at the United Nations Climate Change Conference in Copenhagen (COP15) stalled.

Merkel on Thursday urged other countries to follow Germany's carbon tax example, citing the €25 ($30) per ton tax slapped on carbon dioxide emitted by the country's transport and heating sectors this January, saying, "In the interest of future generations all over the world, it is important that we act quickly and decisively to limit the dramatic consequences of global warming."

The chancellor's remarks also come a day after the German government announced plans to implement more "ambitious" climate goals to curb emissions after a landmark ruling by the country's top court declared a prior key climate protection law "insufficient."

Many observers in Germany found Merkel's performance at the annual summit, a preparatory meeting for this November's UN COP26 climate summit in Glasgow, Scotland, disappointing for its lack of vision — especially considering the fact that it was Merkel who called for the first such summit 12 years ago.

Prior to the summit, Oxfam — a confederation of charitable organizations — called for, "more leadership on global climate policy, more ambitious German climate protection measures and more financial assistance for disadvantaged countries in the fight against the climate crisis."

Although Merkel repeated the goals laid out by German Environment Minister Svenja Schulze and Finance Minister Olaf Scholz on Wednesday — lowering emissions to 65% of what they were in 1990 and achieving carbon neutrality by 2045 rather than 2050 — observers say much more must be done if such goals are to actually be met rather than discussed.

"Germany must cut climate harming emissions by at least 70% by the year 2030. Otherwise we'll have to take action so drastic that it will gravely injure the fundamental rights of younger generations. There is simply no avoiding quickening the exit from coal power by 2030, ending registration for new internal combustion vehicles by 2025 and swiftly ending mass livestock farming," says Greenpeace climate expert Lisa Göldner.

Another key point of discussion at the Petersberg summit was that of assisting developing countries struggling with the financial burden of the climate crisis.

Wealthy industrialized countries have pledged to make $100 billion available to such countries each year — but that has yet to happen.

Groups such as the international church network ACT Alliance EU, have bemoaned the fact that wealthier countries have failed to live up to their promise to help, pointing out that Germany, France, and Spain, for instance, have now opted to provide loans to be paid back at current market rates while presenting those as aid.

"That is unfair because those loans have to be paid back with interest, which means lender nations are going to profit," said Sabine Minninger, an environmental policy expert for the church organization Brot für die Welt (Bread for the World). 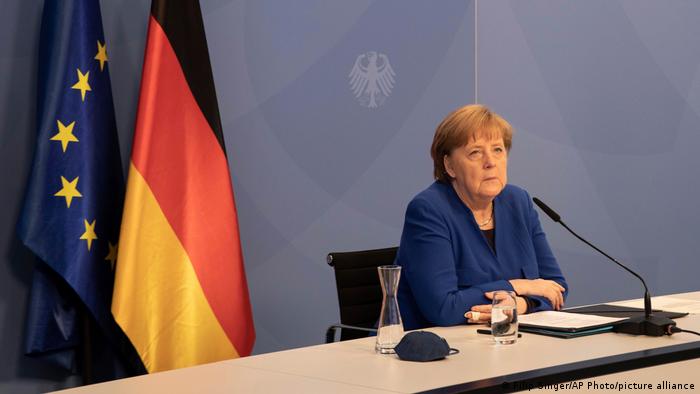 Dubbed by some as the "climate chancellor," Merkel's speech at her last climate conference left experts feeling underwhelmed

While Merkel urged for "international solidarity" to curb emissions, she spoke little of the issue of aiding developing countries — only noting that leaders would likely have to discuss new aid goals in Glasgow and urging wealthy nations to honor commitments despite the financial strains of the coronavirus pandemic: "This pandemic has torn enormous holes in the budgets [of industrialized nations]. We have invested a great deal to counter this pandemic ... and yet we must not let up in our international responsibilities. That will be a very big task."

UK Prime Minister Boris Johnson was more assertive when addressing the topic, saying: "We simply must meet our existing commitments on climate finance, that long overdue $100 billion dollars a year target, and then we must go further still."

Johnson said of Glasgow: "It must be a summit of agreement, of action, of deeds, not words. For that to happen, over the next six months, we must be relentless in our ambition and determination, laying the foundations on which success will be built," adding, "If all that emerges from COP26 is more hot air, then we have absolutely no chance of keeping our planet cool."

World leaders are gathering in Rome this weekend for the first in-person G20 summit since the pandemic. Thousands of protesters marched to demand climate action.

German Chancellor Angela Merkel made her last ever appearance at the summer federal press conference, a tradition organized by a union of Berlin journalists. Many of the questions look back at her 16 years in office.