As relations with the US appear to worsen, German Chancellor Angela Merkel has called for closer cooperation with China. Merkel and Li have held two days of bilateral talks ahead of next month's G20 summit in Hamburg. 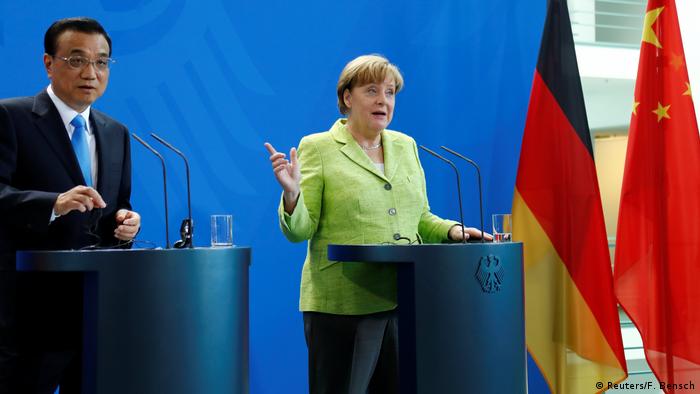 German Chancellor Angela Merkel said on Thursday that Germany must expand its partnership with China at what she described as "a time of global insecurity."

Chinese Prime Minister Li Keqiang had arrived in Berlin on Wednesday, and held talks with Merkel in the capital on Thursday morning. He was later expected to meet with German President Frank-Walter Steinmeier, before moving on to Brussels.

"China has become a more important and strategic partner," Merkel said at a joint news conference with Li. "We are living in times of global uncertainty and see that we have a responsibility to expand our partnership in all the different areas and to push for a world order based on law."

Merkel has in recent days suggested that German-US ties were on less stable ground, having vented her frustration at Trump following last week's G7 talks in Sicily, which she described as "very unsatisfying."

On Sunday, the chancellor said that Germany could no longer "entirely rely" on certain partners quite as it had in the past, making it clear that a Trump White House and a UK leaving the EU threatened to upset the status quo.

Merkel and Li met hours ahead of Trump's decision on whether to withdraw the US from the Paris climate accord.

Li told reporters in Berlin that Germany and China "are both ready to contribute to stability in the world."

Merkel reportedly gave Li her backing for a free-trade deal between the EU and China, but pointed out that an investment deal would be a precondition to any future trade talks.

The chancellor also warned that some sticking points between the two export giants remain, such as limited access to Chinese markets and alleged discrimination against those German firms that do operate in China.

Li used Thursday's meeting with Merkel to reaffirm China's commitment to "steadfastly" implement the Paris climate agreement, even if the US pulls out.

The Chinese premier will travel to Brussels to meet with EU officials later on Thursday, where he is expected to discuss issues such as climate policy, trade and North Korea.

Li is also expected to sign a joint statement reaffirming China and the EU's commitment to the Paris Agreement.

"The EU and China consider the Paris Agreement as an historic achievement further accelerating the irreversible global low greenhouse gas emission and climate resilient development," a draft statement, seen on Wednesday by the news agencies Agence France-Presse and the Deutsche Presse-Agentur, said. "The EU and China underline their highest political commitment to the effective implementation of the Paris Agreement in all its aspects."