Mass dolphin deaths off France, UK likely due to trawling | Environment | All topics from climate change to conservation | DW | 18.07.2017

Mass dolphin deaths off France, UK likely due to trawling

Large-scale trawling is being blamed for killing at least a thousand dolphins that have washed up on beaches in the United Kingdom and France. Activists are demanding tougher protection - Brexit is complicating matters. 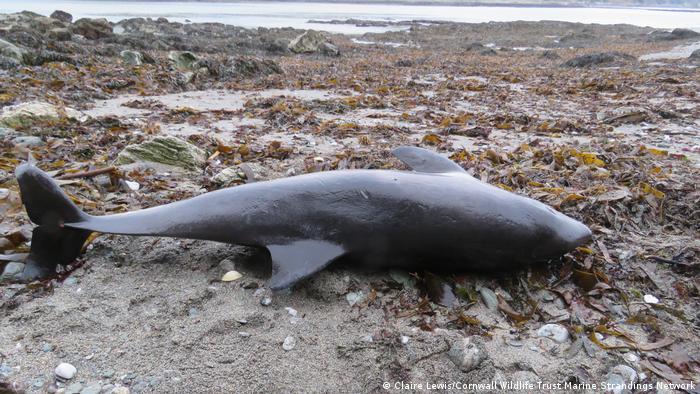 British and French researchers say the number of dead dolphins washing up on their shores is at its highest level in more than 14 years. In the first six months of this year, more than a thousand dolphin carcasses have been spotted on beaches in southwest England and along France's Atlantic coast.

While local media have described the deaths as a mystery, many scientists blame large-scale fishing trawlers for the harm to humankind's closest intellectual rivals.

Although dolphins, like all other sea mammals, die for a whole range of reasons - including pollution, disease and starvation - the sudden spike in deaths has researchers concerned that aggressive, profit-seeking fishing trawlers may also have a large part to play.

Over the past 27 years, wildlife advocate Lindy Hingley has recorded hundreds of incidences of deceased dolphins, porpoises and whales for the Devon County in southwest England. Formerly married to a fisherman, she runs Brixham Seawatch, which encourages the public to report the sightings of dead sea mammals on nearby beaches. 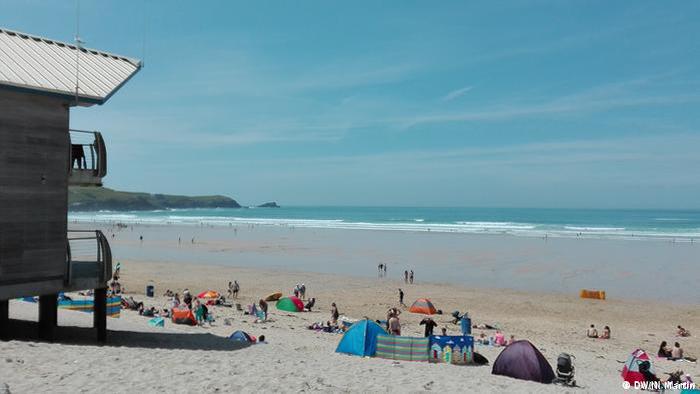 Dolphins wash up on beaches like Newquay in Cornwall, which are used by thousands of surfers and sunseekers

More than a decade ago, Hingley and other researchers noticed a sudden increase in the number of dolphins turning up dead on nearby beaches. After months of research and numerous autopsies, scientists attributed much of the increase to so-called pair trawling in the English Channel - where two fishing trawlers set out to sea pulling a gigantic net between them through the water and along the sea bed.

The dolphins would feast on the huge shoal of sea bass at the mouth of the trawl - not realizing that they, too, were about to get caught up in a kilometer-long net.

"The dolphins - proper top-of-the-tree alpha males, alpha females - would do everything to survive. And they would obviously fight to get out," Hingley told DW.

In their attempts to escape the trawl, she said they would often break their own backs or beaks in the process, experiencing "terrible pain and suffering - with their organs literally exploding because they've been held down so long." 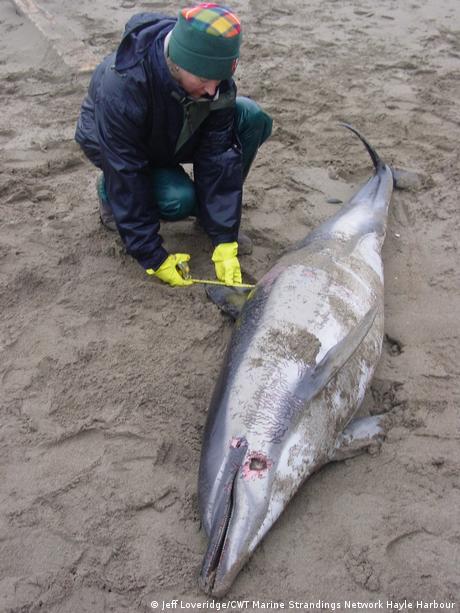 The boats would move at high speeds, ensnaring large amounts of marine mammal bycatch in the nets, environmentalists say.

The practice was so harmful that British boats were banned from pair trawling in UK territorial waters - although that restriction was never extended to foreign trawlers.

This year, however, Hingley says autopsies conducted on several dolphins have revealed much less obvious injuries, which could suggest they were caught up in the back of the net - known as the "cod end."

"They look like they've just jumped out of the sea - clean as a whistle," she told DW, although some were "bruised like a checkerboard."

In neighboring Cornwall, which lies closest to the Atlantic Ocean, monitors believe 2017 could set a new record for dead dolphins washing up on beaches. Devon and Cornwall together have reported close to 200 deaths in the first half of the year alone.

"There's been no evidence of any massive pollution or disease incidence with the few [dolphins] we've had post-mortemed," said Ruth Williams, conservation manager at Cornwall Wildlife Trust.

Williams told DW well over 50 percent of the dolphins examined were too decomposed to accurately determine the cause of death. But the level of decay is consistent with them dying far offshore, while autopsies on healthier dolphins continue to "point the finger to fishing," she added. 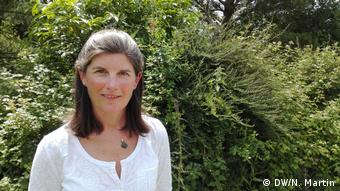 Both Hingley and Williams say most big fisheries are loath to alter their trawling methods amid an aggressive drive for huge profits, despite technology being available to ensure dolphins and other sea mammals don't get caught in the nets.

Acoustic deterrent devices - or pingers - emit a randomized acoustic noise underwater that dolphins or porpoises can hear, and can be easily added to nets.

Fishing boats would switch on their sonar, allowing marine mammals to "see" the net underwater and avoid it, Williams explained.

Cornwall Wildlife Trust said a study of one particular device - the banana pinger - reduced the risk of accidental capture in the net by 86 percent.

Britain's fishing sector insists it is working to introduce acoustic deterrents, and say they regularly allow observers on board their trawlers to monitor bycatch levels.

Fishing nets with a way out

"The fishing industry has no wish to capture dolphins, deliberately or inadvertently," said Dale Rodmell, assistant chief executive of the UK National Federation of Fishermen's Organizations (NFFO) in a statement.

The NFFO described the large number of strandings this year as "unusual" - but insisted that autopsies carried out on some of those found in January and February on beaches in southwest England "indicated that the proportion attributed to bycatch was broadly similar to previous years."

While large-scale fisheries have rejected attempts at regulating their industry, Williams says a change in the law requiring acoustic deterrents would be a minor inconvenience to fishermen in their aggressive drive for profitable trawls.

"It's very small, easy to fit - didn't take any time for the fishermen. Cheapest on the market - it's not a throwaway device, it can use rechargeable batteries," she said.

The bycatch issue is even worse in France, where researchers recorded around 800 dolphins washed up dead on the Bay of Biscay coast in less than a month.

British campaigners said that the issue is severely under-reported in France, amid accusations of a cover-up to appease a very powerful and sometimes belligerent fishing lobby. 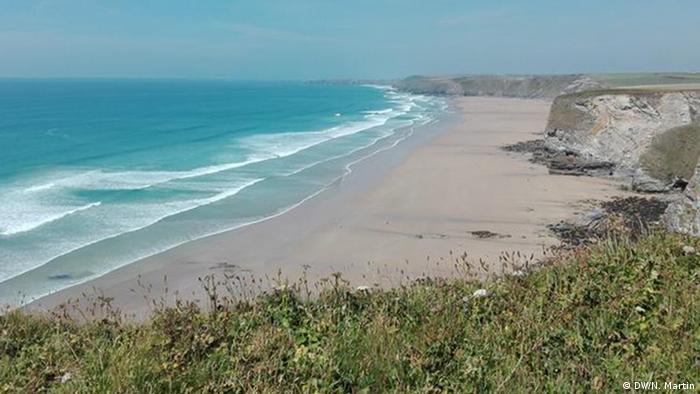 After autopsies were conducted on the latest French batch, marine biologist Helen Peltier estimated that 80 percent of the dolphins showed evidence of being caught up in fishing trawls. She believes the real number caught up in trawls may be as much as five times higher.

"We used a drift prediction model to find the likely cause of death at sea and to correct these stranding numbers by the probability of sinking, and in fact we noticed that 800 stranded animals represent 4,000 dead animals at sea," Peltier, from the University of La Rochelle, told DW.

While France has been slow to act, Peltier said fisheries, marine conservation groups and the government appear to have taken notice over the past year, and are now working closer than ever to address the problem.

Although Britain took the lead a decade ago in restricting pair trawling, the country's decision in June 2016 to leave the EU could see the issue of sea mammal bycatch neglected amid talk of a fishing free-for-all as the government also withdraws from a decade's-old European fishing agreement.

Campaigners complain that Brussels has only imposed temporary bans on pair trawlers, while other fishing legislation has been watered down.

But with low-cost technology that has the ability to reduce marine mammal bycatch, environmentalists hope the amount can be brought down to reasonable levels.

"They're a crucial part of the marine ecosystem - they're the top predators and without them, we don't know what's going to happen with the whole ecosystem.

"We need to maintain that as a whole, and we can't afford to let predators be killed off in such vast numbers," said Williams.

The hacker who claimed responsibility for the cyber attack said it was to protest the killing of dolphins in Taiji, Japan. Government websites have been targeted before over Japan's controversial practice of whaling. (10.02.2016)

Why we care if dolphins die

A dolphin massacre in Taiji, Japan has enraged animal lovers around the world. What makes us adore these underwater beauties? Is it their communicative clicking, their smiling faces or their incredible intelligence? (03.02.2014)