German and Italian police have detained scores of people with alleged ties to the 'Ndrangheta mafia. The suspects formed part of a transnational network involving bakeries, funeral services and vineyards, police said. 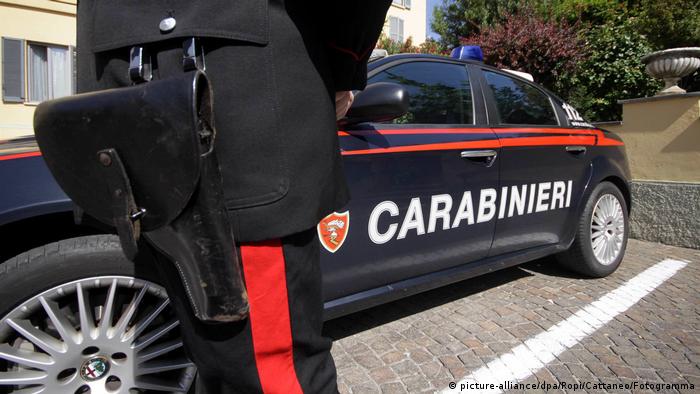 Authorities in Germany and Italy busted a 'Ndrangheta mafia clan on Tuesday, detaining scores of suspects and seizing millions of euros in property.

In Germany, 11 men between the ages of 36 and 41 were detained in the states of Bavaria, Hesse, North-Rhine Westphalia and Baden-Württemberg, Germany's Federal Criminal Police Office (BKA) said in a statement.

German authorities said the men were suspected of blackmail and money laundering, and that the detentions were carried out at the request of Italian authorities.

The BKA added that anti-mafia police in Italy detained another 160 people in the joint operation. Italian authorities said they also seized some €50 million ($60 million) worth of property.

The list of charges facing the suspects in Italy ranges from attempted murder to illegal possession of firearms to illegal waste transportation.

Funerals in Italy, wine in Germany

The Farao-Marincola clan, the 'Ndrangheta crime network that was targeted in Tuesday's raids, is believed to have infiltrated local businesses in the town of Ciro, located in the southern region of Calabria, Italy.

Around Ciro, the suspects were involved in local bakeries, fishing, funeral services and waste recycling. In Germany, they controlled the supply of pizza ingredients and wine to local Italian restaurants.

"They controlled all the economic activity in entire towns," said Italian prosecutor Nicola Gratteri. "It concerned all commercial activity and obviously political power as well."

From Frankfurt to Stuttgart

Outside of Italy, the clan had bases in the German cities of Frankfurt, Wiesbaden, Munich and Stuttgart, the anti-mafia prosecutors' office said in a statement.

Italian prosecutors specifically accused the suspects of driving out all the baking competition in Ciro so that locals were forced to buy bread from the remaining mob-controlled bakery.

Furthermore, the clan also controlled cooperatives that were involved in migrant reception centers.

The Italy-based ANSA news agency reported that around 10 local politicians were among those arrested.

The 'Ndrangheta is considered to be one of the world's most powerful and dangerous Mafia organizations, with the FBI estimating it has 6,000 members spread between some 160 clans. The mafia network has also spread to Germany, the United States, Canada and Australia.

The BKA recognized the 'Ndrangheta as Germany's most dominant crime syndicate in 2015.

Salvatore "Toto" Riina, nicknamed "the Beast," was one of the most feared godfathers in the history of the Sicilian Mafia. He had been serving 26 life sentences and is thought to have ordered more than 150 murders. (17.11.2017)

Some 230 care home operators are thought to have created a systematic fraud network in Germany linked to the mafia, police say. Patients' rights groups say the government is giving organized crime a free ride. (30.05.2017)