Salvatore "Toto" Riina, nicknamed "the Beast," was one of the most feared godfathers in the history of the Sicilian Mafia. He had been serving 26 life sentences and is thought to have ordered more than 150 murders. 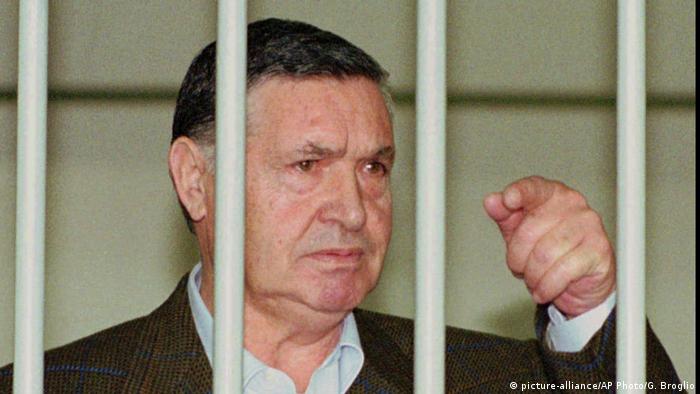 Riina, one of Sicily's most notorious Mafia bosses, had been in a medically induced coma after his health worsened following two recent operations.

Read more:Mafia gangster arrested in Italy for attack on journalist

The former "boss of bosses," who turned 87 on Thursday, died in the prisoners' wing of a hospital in Parma in northern Italy just before 4 a.m. (0300 GMT), according to the country's main newspapers and Italy's ANSA news agency.

Nicknamed "the Beast" for his reputation as a killer, Riina was currently serving over two dozen life sentences, including one for ordering the assassinations of anti-Mafia judges Giovanni Falconi and Paolo Borsellino in 1992.

He led a reign of terror for almost 20 years starting in the late 1970s, when he took control of Sicily's powerful organized crime group Cosa Nostra.

Riina is thought to have ordered more than 150 murders until his arrest in 1993 at a Palermo apartment, six months after Borsellino and his police escorts were killed by a car bomb.

Riina was kept in a Milan prison before his hospitalization. In July this year, a court denied a request by Riina's family to transfer the convicted mobster to house arrest because of his failing health.

On Thursday, the Italian Justice Ministry allowed his wife and three of his four children to visit him in the hospital to say their goodbyes. Riina's eldest son, Giovanni, is serving a life sentence for four murders.

Police in Germany and Italy have arrested 37 people, including two members of the Italian Carabinieri, over suspected involvement in a Sicilian extortion ring. The mafia organization sold drugs, but also frozen fish. (04.10.2017)

Sicilian mafia boss Bernardo Provenzano has died after a long illness. He was considered to be Cosa Nostra's "boss of bosses" for years, prior to his 2006 arrest in Corleone. (13.07.2016)