Macedonia name change could be a game changer | Europe| News and current affairs from around the continent | DW | 28.09.2018

Matters of national identity and interest are at stake as Macedonians vote in a highly divisive referendum on what to call their country. Membership in NATO and the European Union could hinge on the result. 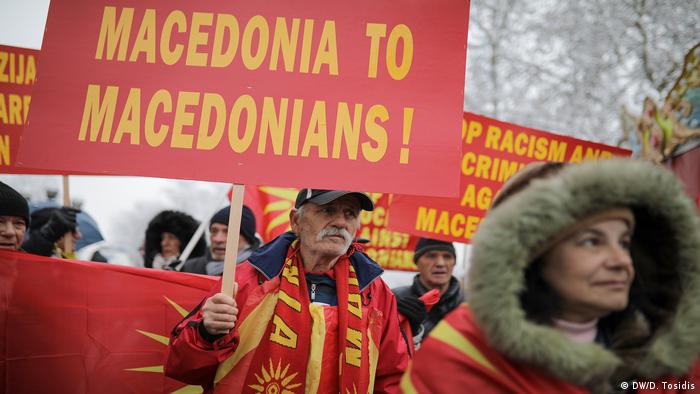 Risto Mijakovski sits in a tent in the small park opposite the Macedonian parliament building in the capital, Skopje. A painter by trade, Mijakovski is a member of the #Bojkotiram (Boycott) movement which wants to preserve the name "Republic of Macedonia."

"By changing our name they want to completely erase the Macedonian nation. We are losing our identity, our language, everything," he told DW.

The debate over what to call the country has been simmering since its independence in 1991. Now, it has reached boiling point. Citizens in one of Europe's youngest countries are set to vote on renaming the former Yugoslav republic "North Macedonia."

Recent polls suggest a majority of Macedonians plan to support the change. But a growing numbers of potential voters such as Mijakovski are trying to undermine the procedure by boycotting the referendum. They hope that if the required 50 percent turnout is not met, the vote will be declared invalid. 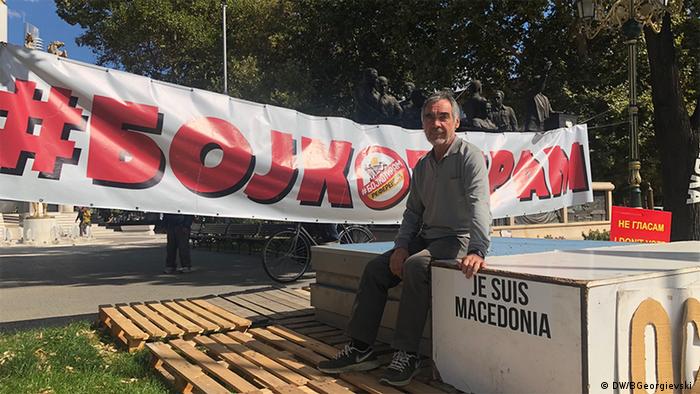 Mijakovski is in it for the long haul

Greece and Macedonia signed a deal in June in an effort to end the name dispute. The stalemate has been over a northern Greek province with the same name. Macedonia's prime minister agreed to the change to North Macedonia. In return, his Greek counterpart promised to stop vetoing Macedonian membership in NATO and the EU.

If the electorate decides to add the geographic qualifier to the country's current name, it could open the door to the international community. If it doesn't, the consequences for one the poorest countries in Europe could be devastating.

The government in Skopje says the agreement does not endanger Macedonian identity, but rather strengthens it on an international level. Leading European and US politicians, German Chancellor Angela Merkel and US Defense Secretary Jim Mattis among them, have visited Macedonia to show their support.

"This is a historic chance that a generation has only once. Don't stay at home: Seize the democratic opportunity to say what you think about the future of your country," Merkel said at a joint news conference with Macedonian Prime Minister Zoran Zaev earlier this month.

During his visit to Skopje on September 6, NATO Secretary-General Jens Stoltenberg confirmed that the "Macedonian defense minister would be able to sit on the NATO table in February next year if the deal is accepted."

EU Enlargement Commissioner Johannes Hahn warned that if Macedonia did not take this "window of opportunity," it could be "closed for decades. If not forever."

Getting out the vote

One Western diplomat, speaking to DW on the condition of anonymity, said  EU countries and the US might support Zaev's position, but only if the referendum produces a clear majority in favor of the agreement with Greece.

Faced with the possibility of a low turnout, Zaev and other government ministers have changed their narrative in the last days of the campaign.

Hristijan Mickoski, leader of the main opposition party VMRO-DPMNE, has described the agreement as "treason." But, afraid he might lose the support of the EU and the US, Mickoski does not want to be seen as an official part of the boycott campaign.

Even after the vote, one large hurdle must still be overcome.

The government needs to ensure a two-third majority in parliament to ratify the agreement and make the necessary constitutional changes. That won't be possible without the support of VMRO-DPMNE.

A government source speaking on condition of anonymity told DW that the government hopes a combination of support in the referendum and international pressure can sway at least some of opposition lawmakers.

For Risto Mijakovski of the #Bojkotiram campaign, that would be unacceptable. "Only the people can decide this issue," he told DW.

Mijakovski has already made up his mind not to vote, and hopes the referendum will fail. He plans to stay in his tent until "the name Republic of Macedonia is saved." 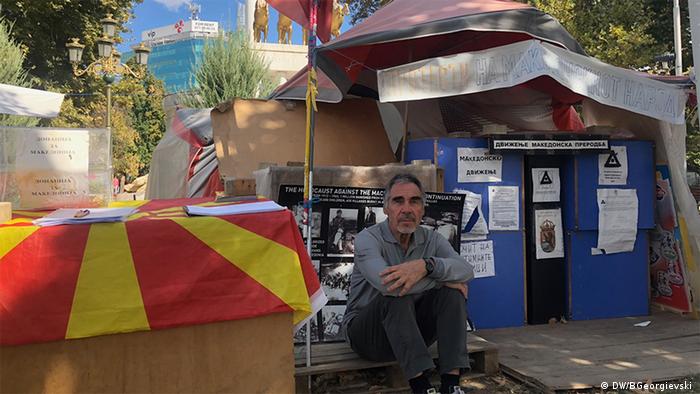 Mijakovski, outside his tent, hopes the vote will be declared invalid

Greece and Macedonia have reached an agreement in their long-running dispute over the name of the former Yugoslav republic. Senior officials from both the EU and NATO have welcomed the agreement. (12.06.2018)