The countdown has begun for Macedonia's referendum on changing the country's name to the Republic of North Macedonia. A name change would pave the way for the former Yugoslav republic to join NATO and the EU. 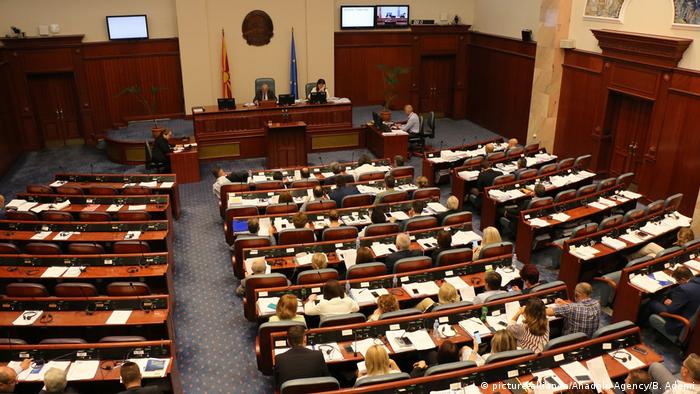 Macedonia's parliament on Monday approved plans to hold a referendum on changing the country's name to the Republic of North Macedonia.

In a vote that was boycotted by Conservative opponents, 68 lawmakers in the 120-seat assembly backed the proposal by Social Democrat Prime Minister Zoran Zaev. The vote is to take place on September 30.

The name change would allow the former Yugoslav republic to resolve its long-running dispute with neighboring Greece and join NATO and the European Union.

The parliamentary approval follows a landmark agreement between Skopje and Athens in June, when the two countries agreed to rename the Former Yugoslav Republic of Macedonia (FYROM) in an effort to break the stalemate that has afflicted their relations since 1991.

Athens has objected to its neighbor being called Macedonia because it has a northern province by the same name, and is concerned it may imply territorial ambitions.

The dispute has so far stymied Macedonia's efforts to join the NATO and the EU, where Greece enjoys a veto power.

The proposed name change has triggered protests in both countries, with Macedonian nationalists calling it an assault on the country's identity.

The referendum question approved on Monday does not spell out the new name but underscores the government's ambitions of stronger ties with the West.

"The question is ambiguous and multifaceted, and above all manipulative," said Igor Janusev, a leading member of the nationalist opposition VMRO-DPMNE party.

If Macedonians do vote for the name change and the parliament amends the constitution, Greece's lawmakers will then have to ratify the accord.

The dispute between Greece and its neighbor Macedonia over the latter's name is still very much alive. The long-running quarrel can take on very nationalistic overtones, as Jannis Papadimitriou describes from Athens. (04.02.2018)