Macedonia and Greece: Locked in naming dispute | Europe| News and current affairs from around the continent | DW | 04.02.2018

The dispute between Greece and its neighbor Macedonia over the latter's name is still very much alive. The long-running quarrel can take on very nationalistic overtones, as Jannis Papadimitriou describes from Athens.

It was the biggest demonstration in Greek post-war history: More than a million people gathered in Thessaloniki in February 1992 to protest against a planned compromise in the dispute over the name of the Republic of Macedonia. A government crisis ensued in Athens: The conservative premier Konstantinos Mitsotakis dismissed his foreign minister, Antonis Samaras, known as a hard-liner, but then had to step down himself.

His successor Andreas Papandreou favored a hard stance and imposed a temporary embargo on Greece's neighbor. Even today, Athens still insists that the country should change its constitutionally enshrined name of "Republic of Macedonia." Greece views that name as part of its history and a threat to its northern region that is also called Macedonia.

However, Greece has since backed away from its absolute rejection. For some time now, it has accepted its neighbor's continued use of "Macedonia" in some form, and the left-wing government of Alexis Tsipras wants to stay on this path. 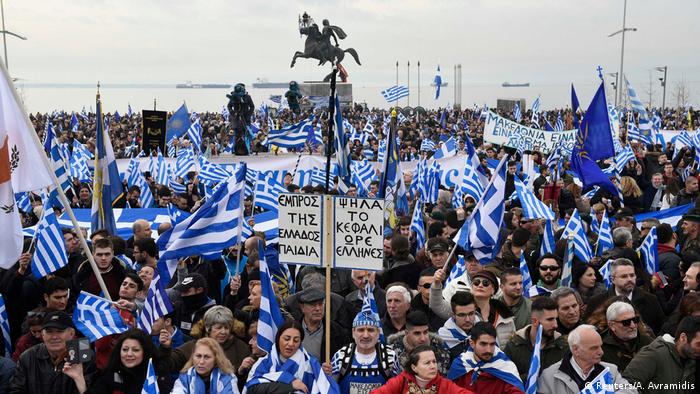 "Gorna Makedonija" (Upper Macedonia) was proposed in the latest round of UN-held negotiations, and Athens has reportedly said it is prepared to vote for the name.

But now, protesters against the compromise are weighing in. At the end of January,there was a huge rally in Thessaloniki, and on Sunday Athens is the backdrop for a similar one. The counter-movement behind the rally, which calls itself "Macedonian Associations," says it wants to protect the traditions of Greece's Macedonian region.

"It is a patriotic gathering," Georgia Bitakou, the initiative's spokesperson, said in a TV interview. "The name Macedonia is non-negotiable."

The re-emergence of such demonstrations is typical of a part of Greek society, the political scientist Levteris Koussoulis told DW. "Some here feel connected to this history in a strangely backward way," he said. "They are stuck in the past and don't understand that the world has moved on."

There is also concern that right-wing populist and nationalist voices may join the protests. Parliamentarians from the far-right Golden Dawn party already took to the streets in Thessaloniki but stopped short of making political statements. Their presence would be tolerated at Sunday's protests in Athens should they appear, said rally organizer Bitakou, adding that the rally was open to all who wanted to "defend" their country.

Other right-wing representatives also plan to take part, such as Kyriakos Velopoulos, a former parliamentarian for the Popular Orthodox Rally (LAOS) and now the head of the pro-Russian movement "Greek Solution."

When asked by the journalists whether he would be prepared to see a war between Greece and Macedonia on this account, Velopoulos responded: "Of course not — economic war is also an option."

Greek Defense Minister Panos Kammenos is among the right-wing populists against a compromise in the dispute, although he has remained largely silent on the issue. While he is out of the country during Sunday's protests, he said he had encouraged his family to participate. Supporters of his party would take part as "ordinary citizens," he added.

Kammenos, as a junior partner in Tsipras' ruling coalition, faces a dilemma: If he refuses to budge, the coalition's fragile parliamentary majority will be put at risk, but toeing the government's conciliatory line would disappoint his own followers. 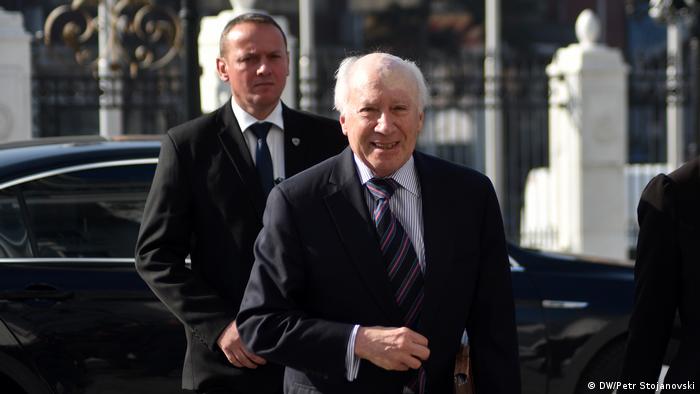 Matthew Nimetz is the UN Special Representative in the naming dispute

The organizers are at least prudent enough not to allow any out-and-out right-wingers onto the podium on Sunday. The main speakers that have been announced so far are the constitutional expert Jorgos Kassimatis and the composer Mikis Theodorakis.

In a recent public statement, Theodorakis, a left-wing idol, warned against backing down in the naming dispute. "The memory of Yugoslavia is fresh; our country will be the next victim," he said. Theodorakis has lately drawn attention to himself with anti-Semitic remarks, among other things, and the fact that he, at 92, is being roped in for a patriotic rally has been observed unfavorably by some commentators.

Political scientist Koussoulis said he does not see Sunday's protests as specifically nationalist in nature. "The movement has nationalistic roots, but is supported and interpreted by many people from many backgrounds," he said. "It's a way to protest the government in general."

Is the issue of the naming dispute being used as a chance to vent anger against the left-wing government of Tsipras? That seems possible. "I'll be there on Sunday because I want to protest against government policy," said the conservative radio host Aris Portosalte.

Conservative opposition leader, Kyriakos Mitsotakis, has not gone so far and said that people should decide for themselves whether to demonstrate on Sunday or not. He declined to say whether he would take part himself.