As the EU announced it will allow accession talks with Western Balkan nations, Macedonian Prime Minister Zoran Zaev told DW that his country will "proudly walk through the gates of Europe." 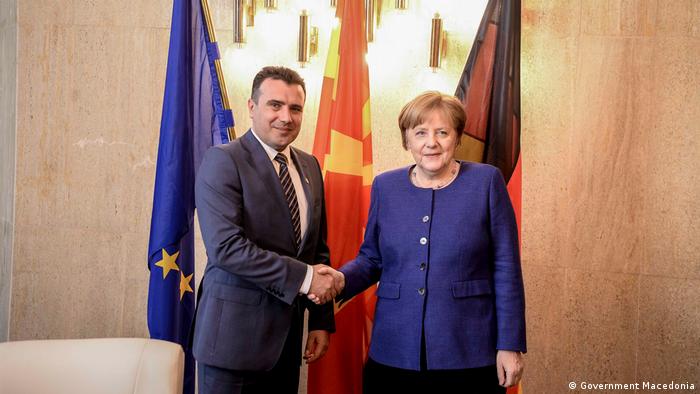 Zaev: Germany's support for Western Balkan EU accession has been a "great motivation" for progress

DW: Mr. Prime Minister, there are different interpretations of the EU's decision to start membership talks with Macedonia and Albania. Your government claimed it as a historic success, but critics say it is another postponement and disappointment for the country. How do you see the decision?

There is no other description for this decision: It is a historic one. We have a date for negotiations: June 2019. Until then, together with our friends and partners from the European Commission, we will work on accomplishing the criteria, or in other words, implementation of the phases in the agreement with Greece and finalizing of the reforms. We are very close to our goal of reaching the EU standards. We have a clear goal ahead of us. We have our last homework assignment to finalize — the last phase of the reforms. Then, we can proudly enter through the gates of Europe.

DW: Would the EU decision have been possible without German support considering the strong resistance from France and other EU members?

Germany's dedication to the results that the Western Balkan countries should deliver has been of utmost importance and a great motivation for us to complete our reforms. The Republic of Macedonia deeply appreciates the strong messages of support coming from Germany for our strategic goals – our NATO and EU membership.

I would like to use this moment to thank Chancellor [Angela] Merkel for initiating the Berlin Process and for having Germany as one of the strongest supporters of this process. This initiative is the key motivator for the new, dynamic regional cooperation on the highest political levels.

DW: Why did France and the Netherlands so strongly object to Macedonia's bid to start negotiations sooner?

We understand the positions and needs of the EU member countries who believe that the EU firstly needs a consolidation before a further enlargement involving new members. At the same time, we believe there are arguments supporting the idea that the EU consolidation will be finalized if the enlargement process continues, because in this way, important safety and security issues connected with external influences can be effectively managed. That is the next necessary step in accordance with the political, security and economic interests of the Union.

The consolidation of the EU will be complete when the union accepts the Western Balkan countries that fulfill the necessary conditions in its family — including the Republic of Macedonia, of course.

DW: In its conclusions regarding Macedonia, the EU asks for more focus on these key areas: Judicial reforms, tackling corruption, intelligence, security services and public administration. Can your government deliver on these reforms in the relatively short period before June 2019?

I am convinced we can achieve that. All those points have passed through the first phase of the reform process and will be further intensified with the new comprehensive reform plan that will be adopted very soon. We hold the position that the recommendations will be fully implemented by the date for negotiations!

DW: On another topic: recently Albania was mentioned as a possible destination for a refugee and migrant camp. Is there also pressure on Macedonia from some EU members to allow such a camp on its territory?

At this moment, there are no discussions within the government of the Republic of Macedonia about opening refugee camps here. Macedonia already has two functioning transit centers for short stays of migrants and the security of the national borders in this moment is generally good, but there are no conditions for opening new migrant camps.

DW: Less than two weeks ago your government signed a historic agreement with neighboring Greece on the name issue. How much harder does this conditional invitation from the EU makes your efforts to convince the nationalists and the opposition in your country to support the deal?

I remain firmly and fully dedicated to demonstrating that this agreement with Greece solves the biggest problem that was preventing our development since our independence.

We have a crystal-clear confirmation of the Macedonian language and identity of Macedonians, at home and abroad. Translatable, without any limitations, into all languages in the world, an identity for overall use. Those political factors that cannot see this are creating new divisions. We need to unite around this new historical opportunity. I believe in this, and I will invest all my political integrity and energy to that end.

DW: Yet there is strong resistance in Greece against the recognition of a "Macedonian nation" and "Macedonian language" as part of the agreement. Is that a cause of concern for you?

The fact that opposition political parties of both countries are against the agreement between the Republic of Macedonia and the Republic of Greece shows that a good compromise between the people of both counties has been reached. The citizens of Macedonia have full recognition of the Macedonian identity on all accounts, and the citizens of Greece have recognition of the Hellenic inheritance of the ancient part of history.

The opposition political parties in both countries have had an opportunity to solve this dispute for decades, but they have not done anything. On the contrary, they were only strengthening the differences. Now, when faced with the fact that a solution is possible, and that this solution is equally acceptable for both sides, they choose to resist it, instead of accepting that this is the only way the two countries can move forward.

DW: Are there any plans for new meetings with the Greek PM [Alexis] Tsipras in order to maintain the process of rapprochement between the two countries?

The possibilities for meetings are now continuously open. We have built a friendship though this process that allows us to communicate in different ways at any given moment. There are no more barriers to our communications. Together we will follow and celebrate the process after Prespa.