Greek lawmakers have voted down a no-confidence motion against Prime Minister Alexis Tsipras. The vote was called over a deal to end a long-running name dispute with the neighboring Former Yugoslav Republic of Macedonia. 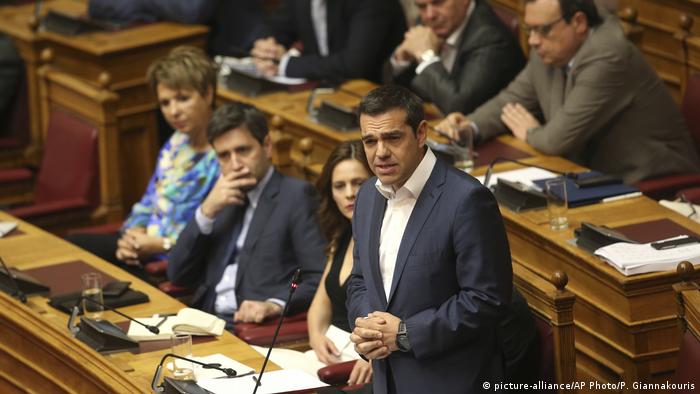 The left-led coalition government of Greek Prime Minister Alexis Tsipras on Saturday survived a no-confidence vote brought by the conservative opposition New Democracy party after the government reached a landmark agreement with the Former Yugoslav Republic of Macedonia (FYROM) over its name.

The parliament voted 153-127 against the motion.

The deal, struck on Tuesday, would allow Macedonia to rename itself North Macedonia. It has angered Greek nationalists, who insist that any retention of the name "Macedonia" by the neighboring country implies claims to Greece's province of the same name and usurps ancient Greek heritage and history.

Ancient Macedonia was the birthplace of the king Alexander the Great,  who created one of the largest empires in the ancient world.

Protest and tear gas outside the parliament

Ahead of the no-confidence vote, senior opposition lawmaker Fofi Gennimata said the deal needed to be "improved before it is too late."

"We do not trust this government," said Gennimata, who serves as the leader of the socialist Movement for Change. "Your administration is incompetent and dangerous."

"Today you are all mortgaging the future of the country," said conservative New Democracy party leader Kyriakos Mitsotakis, who brought the no-confidence motion to the parliament. Another conservative lawmaker, Yiorgos Kasapidis, described the deal with Macedonia as "treason."

Outside the parliament building, police used tear gas against protesters opposing the name deal, with some of the demonstrators attempting to scale stairs leading to the chamber. Thousands more chanted anti-government slogans, with minor scuffles breaking out.

Dissatisfaction on both sides

The agreement aimed to end a bitter dispute between the two countries that has been running since shortly after Macedonia declared independence in 1991.

But it has met with criticism from hardliners in both countries who feel that it makes too much of a concession to the other side. Demonstrations have taken place in Macedonia against the deal

Protesters in Athens were planning a demonstration against the agreement later on Saturday.

The deal is set to be signed by the Greek and Macedonian foreign ministers on Sunday, but the ratification process will take several months and faces many hurdles in Macedonia.

Even if it is ratified by Macedonia, the Greek government will also face big obstacles in carrying out its side of the process. The government's junior coalition partner, the right-wing Independent Greeks, has said it will not support the agreement when it comes up for ratification in parliament, leaving Tsipras dependent on opposition parties.

The Independent Greeks party, however, gave its support to Tsipras in the no-confidence vote on Saturday, with leader Pavlos Kamenos saying he did not want to topple the government despite his opposition to the Macedonia deal.