Prime Minister Alexis Tsipras has faced rejection at home over his deal to settle the dispute over Macedonia's name. Tsipras's leadership will be tested as parliament considers a no-confidence motion against him. 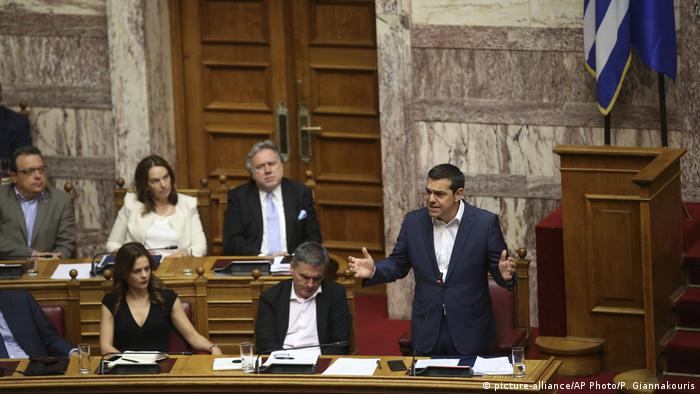 The Greek parliament moved on Thursday to debate a no-confidence motion against Prime Minister Alexis Tsipras's government. Lawmakers acted following Tsipras's deal with the neighboring Republic of Macedonia that it should be called Severna Makedonja, or Northern Macedonia.

The parliamentary debate is expected to conclude on Saturday and if successful, it would mean that Tsipras would have to hand over his governing mandate to Greece's president.

The agreement between the Greek prime minister and his Macedonian counterpart, Zoran Zaev, was meant to solve a decades-old dispute between the two countries over Macedonia's name.

Greece has used its influence to prevent its neighbor from joining the EU and NATO because it fundamentally opposes their use of the name Macedonia.

For Greece, the term "Macedonia" implies a territorial claim on its northern province, also called Macedonia, which is the birthplace of Alexander the Great, a major figure in ancient Greek heritage and history.

The agreement between Zaev and Tsipras, although technically a compromise, has been fiercely opposed in both countries, by citizens and politicians alike.

Macedonia's president, who holds a largely ceremonial post, broke with his prime minister on Wednesday and said hewould not support the name change.

"I have an obligation before the Greek people to try to avert the mortgaging of our country's future with an agreement that is detrimental to our national interests," New Democracy leader Kyriakos Mitsotakis said, explaining his party's move.

Tsipras's governing left-right coalition currently holds a 154-seat majority in the 300-member parliament. To survive the no-confidence vote, the prime minister needs the full support of his governing bloc and especially of his coalition junior partner, the right-wing Independent Greeks.

Defense Minister Panos Kammenos, Defense Minister and leader oft he Independent Greeks, has opposed Tsipras's Macedonia name deal and has not yet signaled whether this conflict would lead him to support the no-confidence vote.

"What goes around comes around," Tsipras said in parliament on Thursday, shrugging off the no-confidence motion. The prime minister then blamed the New Democracy party for failing to resolve the issue itself, when it was in government.

Macedonia and Greece are near agreement on a name change that has vexed bilateral relations since the 1990s. Greece has used its leverage within NATO and the EU to block its neighbor from joining those clubs. (30.05.2018)