France and the Netherlands have sacrificed the EU's credibility in the Balkans, punishing Macedonia and Albania in order to appease populists. It's a dangerous and shortsighted move, says DW's Boris Georgievski. 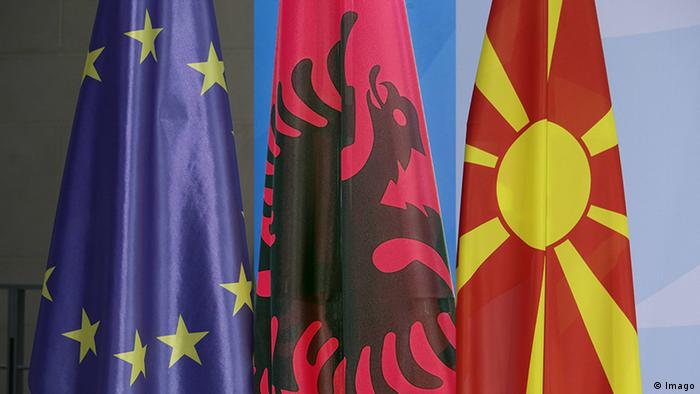 An EU candidate country since 2005 and recommended for accession negotiations nine times, Macedonia has never been spared humiliation and disappointment in its relations with the European Union.

For almost a decade Greece blocked the Balkan country over the name dispute. Now that the dispute is nearing an end, the future North Macedonia rightfully hoped to receive its just reward. But the EU managed to disappoint the country once again. Instead of recommending a date to start the accession negotiations as promised, the EU has announced it will "set out a path towards opening accession negotiations in June 2019." The same fate befell Albania, Macedonia's western Balkan neighbor.

Both Macedonia and Albania are victims of internal EU disagreements: France and the Netherlands wanted to postpone the European Commission's plan for negotiations mainly because of their own internal political considerations. And although French President Emmanuel Macron for his part has argued that the EU shouldn't accept more members before carrying out its own internal reforms, EU officials have indicated Macron is actually afraid that French populists and right-wing movements would use accession to drum up fears of migration from Eastern Europe.

The governments in Skopje and Tirana, as well as the European Commission, tried to put a positive spin on the decision, praising it as historical, but it would take an enormous effort to find much to celebrate.

After years of up-and-down politics towards the Western Balkans, the European Commission finally found a consistent instrument to keep the region aligned and committed to peaceful transition and reforms: the carrot-and-stick approach. The EU will deliver full EU membership, investments in infrastructure and know-how, plus access to the EU market in exchange for judicial reforms, steady improvements to the market economy, as well as anti-crime and anti-corruption measures.

But instead of sticking to its principles and promises, the EU has decided – once again – to ignore them.

France and the Netherlands have basically decided to sacrifice the EU's credibility and reliability in the region, punishing Macedonia and Albania despite the fact that they did what was asked of them, in order to somehow appease the far-right.

Furthermore, Macron's argument that the EU is too weak for further enlargement is baseless since the countries would not join the EU anytime soon, anyway. Even if both countries began accession negotiations tomorrow, they wouldn't be able to become full members before at least 2025, giving the EU more than enough time to consolidate, reform or even fall apart.

It's hard to say whether the decision taken in Luxembourg would appease the populist forces in France or the Netherlands, but it will certainly send shivers down the spines of the pro-EU forces in the Balkans. Willingly or not, the EU just gave a new impetus to the nationalist, pro-Russian and pro-Turkish forces in the region, the same ones that Brussels was apparently ready to confront and neutralize.

The decision threatens to make life especially difficult for the new reformist government in Macedonia. On June 17, Macedonia and Greece signed a historic agreement to end the decadeslong name dispute by changing Macedonia's name to North Macedonia. Faced with daily protests by the nationalist forces and strong resistance from the main opposition party, the promise of EU integration was one of the most important incentives for the government in Skopje to sign the agreement and "sell it" to the suspicious domestic public. The delay to EU talks once again puts into question not only the future of the historic agreement, but also the stability of the whole region.

In a speech at the Sorbonne last year, French President Macron talked about a united Europe and ironically put the blame for the growing euroskepticism on the leaders he criticized as too guarded to confront public opinion and lay out a clear vision. Nobody can really be sure what Macron's European vision holds, but it's evident that he was the first one who pulled out from confronting public opinion in his country when it mattered.

Albania is reportedly open to hosting reception centers for individuals seeking asylum in the EU. The plan could help keep embattled German Chancellor Angela Merkel in power and placate her hard-line interior minister. (22.06.2018)

Opinion: Navalny's struggle goes beyond an anti-corruption crusade 6h ago