German Chancellor Angela Merkel has visited Skopje to add her voice to calls that the Balkans nation rename itself as "North Macedonia." The dispute has long hobbled ties with Greece and integration into the West. Merkel made the first ever official visit by a German chancellor to Macedonia on Saturday, describing its 30 September renaming referendum as a potential stabilization move of "great interest" to Germany and the EU.

Central to the referendum is a renaming deal reached between Athens and Skopje in June - aimed at placating the Greek north's sole claim to the name Macedonia and thereby unraveling long-standing Greece's vetoes against Skopje's inclusion in NATO and the EU.

"Are you for EU and NATO membership by accepting the agreement between the Republic of Macedonia and the Republic of Greece?" is the referendum question passed by Macedonia's parliament in July — despite a boycott by opposition nationalists.

Currently, Skopje is recognized as the "Republic of Macedonia" by more than 120 countries, including the US and Russia.

Opposing the Athens-Skopje deal are nationalists in Macedonia, as well as Greece, for varying reasons.

Thousands protested again in the northern Greek city in Thessaloniki on Saturday in opposition to the deal, with police using tear gas against some groups that turned violent and threw stones at officers.

Merkel, who was welcomed to Skopje with military honors by Prime Minister Zoran Zaev, was also due to hold talks with opposition leader Hristijan Mickovski of the conservative party VMRO, which lost office last year to Zaev's Social Democrats. 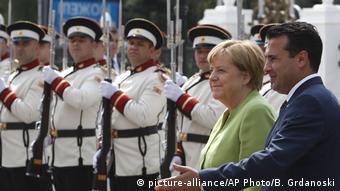 Military honors for Merkel in Skopje

The VMRO, like Merkel's Christian Democratic party (CDU),  is part of the European People's Party and EU parliamentary level.

Merkel's talks in Skopje follow visits to by NATO Secretary General Jens Stoltenberg on Thursday and Austrian Chancellor Sebastian Kurz on Friday, who both appealed to Macedonians to embrace the new name.

Stoltenberg said Macedonians had a "once in a lifetime opportunity" to join NATO as its 30th member, and the EU, "but for this you have to agree to the name agreement."

Macedonia's nationalist President Gjorge Ivanov — after meeting Stoltenberg — said proffering the "EU and NATO cannot be an alibi for a bad deal."

Kurz, visiting Skopje on Friday, urged Macedonians to vote for the name change, saying the EU would not be whole until Western Balkan countries, Serbia and Macedonia included, joined it.

US visitors as well

Due to visit Macedonia next week is Senator Ron Johnson, the chairman of the US Committee of Homeland Security.

On Thursday, the US embassy in Skopje published a letter in which US President Donald Trump said the deal "smoothed the way" for membership in NATO and the EU.

General Joseph Dunford, who chairs the US Joint Chiefs of Staff, visited Athens.

The European Union, for its part, has intimated that any accession negotiations - not likely before June 2019 – would hinge on the name-change referendum and results on reforms, particularly in fighting corruption.

France and the Netherlands are still skeptical.

Last month, the Council of Europe's anti-corruption group found that Macedonia had implemented only six of its 19 recommendations.

Greek lawmakers have voted down a no-confidence motion against Prime Minister Alexis Tsipras. The vote was called over a deal to end a long-running name dispute with the neighboring Former Yugoslav Republic of Macedonia. (16.06.2018)