Gabrielius Landsbergis tells DW that Minsk is shuttling refugees from Iraq to Lithuania to exact revenge for sanctions. He warned that the EU could see "waves of refugees" if the practice is not stopped. 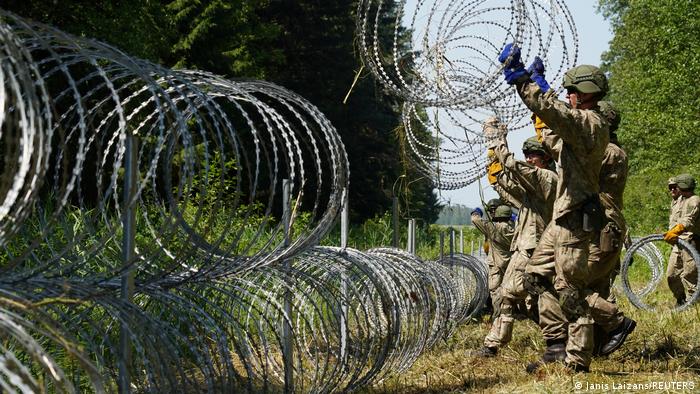 Lithuania's Gabrielius Landsbergis, in Brussels for a meeting of EU foreign ministers, told DW that Belarus was using refugees from war-torn countries as "human shields" in an attempt to force the European Union to ease sanctions.

"This is a hybrid weapon being used against the European Union" to force the bloc to change policy towards Belarus.

Landsbergis claims that his country has "concrete evidence of Belarusian border guards who facilitate the travel of groups of refugees or even try to disguise their foot prints on the ground."

The foreign minister's warning comes days after Vilnius declared a state of emergency over the issue and began construction on a 550-kilometer (320-mile) razor-wire fence to cope with the rush of new arrivals.

Authorities in Vilnius also said on Monday that they would open a new camp to house some 500 migrants in response to the new arrivals.

Lithuania says most of the people arriving at its border are from Iraq, accusing Belarusian President Alexander Lukashenko of orchestrating the crisis, for instance, by facilitating direct flights from Baghdad to Minsk.

More than 1,600 migrants have illegally entered Lithuania from Belarus this year — 20 times the number of people who arrived in all of 2020. More than 1,000 of those arrivals have occurred over the past two weeks, according to Lithuania's border guard service.

"We need to inform the people that they are being lied to," said Landsbergis. "They are being promised an easy passage to Europe, a very free life in Europe. This is not going to happen.”

Landsbergis stressed that if the Belarus route is not blocked soon, other countries, such as Germany, "would be facing waves and waves of refugees who are illegally traveling to and entering Europe."

Landsbergis said Belarus' actions were an attempt to break EU resolve over sanctions for fraud in last year's presidential election, as well as human rights abuses that have occurred in retaliation to mass protests over the sham vote.

He said the EU should not stop pressuring the regime in Minsk just because it is fighting back: "It doesn't like that we are vocal about human rights, vocal about the rights of the opposition in their country. And they don't like the sanctions that are being imposed on them. But that means that the pressure is working."

After concluding meetings in Brussels, where Landsbergis pitched the idea of a fifth round of sanctions, the foreign minister will travel to Baghdad in an effort to clamp down on departures and facilitate returns.