Lithuania claims that Belarus is directing the flow of migrants from the Middle East and Africa illegally across the border into the EU. 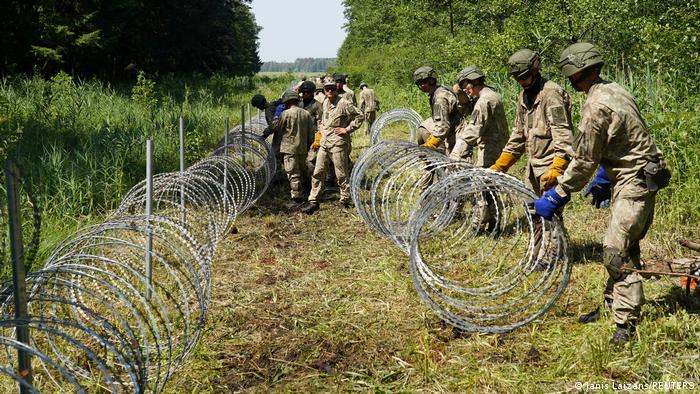 Lithuanian soldiers installing razor wire on the border with Belarus in Druskininkai, Lithuania

Lithuania on Friday began putting up a fence along its border with Belarus after experiencing a recent massive influx of migrants coming from its neighbor.

Vilnius has accused Belarusian authorities of encouraging the flow of migrants illegally into Lithuania, an EU member state, in retaliation for sanctions imposed on Belarus by the bloc over human rights abuses and other issues.

More than 1,500 people have crossed into Lithuania from Belarus in the past two months — a number 20 times that seen in the whole of 2020.

How will the fence be constructed?

The fence will be constructed of two layers of barbed wire and cover 550 kilometers (340 miles) of the nearly 680-kilometer border.

The barrier will cost €41 million ($48 million) to put up, according to Lithuania's interior minister, Agne Bilotaite. 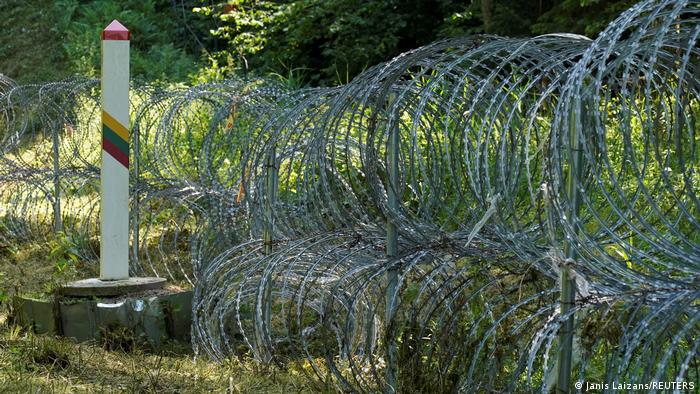 The fence will end up being 550 kilometers long

What does Lithuania accuse Belarus of?

"The conditions for crossing the border are created deliberately, and we tend to see behind that, among other things, the purpose to harm our state and destabilize the situation," she said.

She said her government considered the actions by Belarus to be directed against the entire EU rather than Lithuania itself.

What has Belarus said?

President Alexander Lukashenko said this week that Belarus would not close its borders "and become a camp for people fleeing Afghanistan, Iran, Iraq, Syria, Libya and Tunisia.''

He added that such migrants were not wanting to come to Belarus but to "the enlightened, warm and cozy Europe."

Lukashenko's mocking comments came as the always strained relations with the EU hit a new low following the forced landing of a Ryanair passenger jet in Minsk to detain a Belarusian dissident journalist.

Lithuania has given support and refuge to opposition figures from Belarus following elections there in 2020 that were won by Lukashenko but have been widely condemned by the West as rigged.

Lithuania to Belarus: 'Rather watch hell freeze over' than deliver Tsikhanouskaya

Opposition leader Sviatlana Tsikhanouskaya has been living in exile in Lithuania since running against Belarusian President Alexander Lukashenko in contested elections last August.

Raman Pratasevich met with his lawyer after four days in detention. Belarusian and Lithuanian journalists were joined by the director of Reporters Without Borders in a protest vigil on the EU's eastern border.