Former Libyan prime minister Ali Zeidan has fled to Europe. Unconfirmed reports that he flew via Malta to Germany have not been verified. 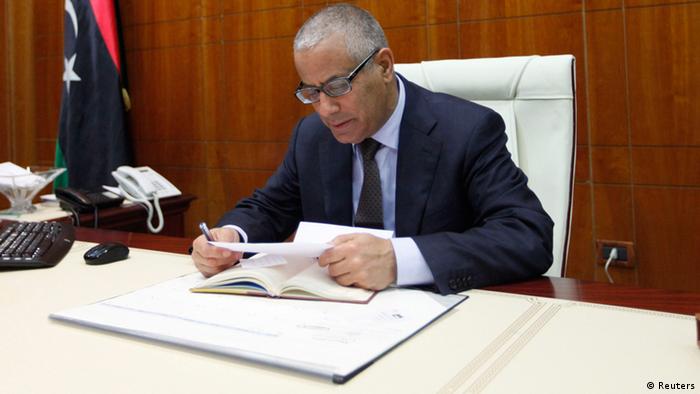 Ex-premier Ali Zeidan reportedly fled to Europe on Wednesday, a day after Libya's interim parliament in Tripoli voted him out of office for failing to stop an oil export by rebels from eastern Libya.

Maltese government sources quoted by Reuters said Zeidan left on board a private plan bound for Germany. This was not confirmed by German authorities.

Zeidan lived for many years in Europe before the 2011 uprising against the late-Muammar Gadhafi encouraged exiles like him to return home.

On Tuesday, the large North Korea-flagged tanker Morning Glory, loaded with crude oil from the rebel-controlled port of Sidra, escaped through a improvised naval blockage imposed by Zeidan. The tanker then entered international waters.

Last Saturday, Zeidan had threatened to bomb the 37,000-ton vessel if it set sail.

Fighting broke out briefly later on Tuesday in the central coastal city of Sirte, between rebels and pro-government forces.

The interim parliament appointed Defense Minister Abdullah al-Thini as caretaker premier for 15 days. The parliament's speaker, Nuri Abu Sahmain, had been engaged in a power struggle with Zeidan,

Since the 2011 ouster of Gadhafi, Libya has been divided along tribal, regional and political lines, with hardline Islamists opposed to more liberal figures such as Zeidan.

The country has no effective army or police and its Tripoli-based government risks running out of money because of rebel activities.

Libya goes to polls to elect assembly to draft constitution

A ballot to elect an assembly to draft a new constitution is under way in Libya. The poll has been billed as a milestone amid public frustration over a central government that has little control over regional militias. (20.02.2014)