Leroy Sané: What now for Bayern Munich and Germany star?

Germany and Bayern Munich winger Leroy Sané ended his season for both club and country still looking for a return to top form. After missing the cut for a major tournament before, he's in danger of doing so again. 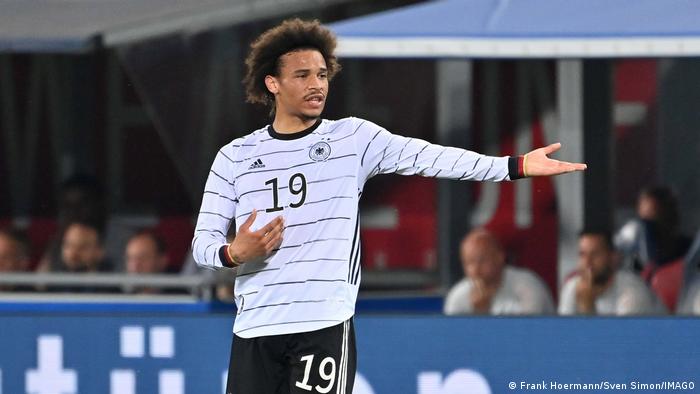 Leroy Sané is not the player he used to be

Seven minutes into Germany's big win over Italy, Leroy Sané made the wrong decision and then fired a shot wide. Three minutes later, his pass was misplaced again. As the end of the first half approached, he ranted at the referee in frustration. By the end of the evening, Sané had missed two glorious chances to score as a night full of energy and effort ended with the Bayern Munich winger, if not his team, empty-handed.

Four years after he was a surprise omission from Germany's 2018 World Cup squad, the 26-year-old is struggling to suggest he should be included in the next one.

Sané was one of the biggest disappointments during Germany's four games in June.

The 26-year-old started both games against Italy, and while better in the second than the first will be disappointed by his showing. Against England, he barely featured and in Budapest he watched the entire game from the bench. Sane should have scored against Italy

"It's not an easy situation for him," team manager Oliver Bierhoff said after the team's trip to Hungary. "We'll help him but he also has to help himself. At the end of the day, you have to fight your way out of there as a player."

Russia all over again?

In 2018, after being named PFA Young Player of the Year after a string of top performances in a title-winning season at Manchester City, Sané looked a lock for Germany's squad. But he was sent home after the final training camp by the then-Germany coach, Joachim Löw.

"Leroy is an exceptional talent... But has perhaps not quite arrived in the national team yet... [Julian] Brandt was at the Confederations Cup, and worked hard in the training camp," Löw said at the time, with criticism for Sané apparent when reading between the lines.

Sané chose to have a medical nose operation rather than attend the Confederations Cup, and both his efforts in training and his decision-making in Germany warmup games were less than optimal.

Returning from an ACL injury, Sané had a slow start at Bayern Munich in 2020 but eventually began to impress again, securing a spot in Germany's Euros squad last summer. But during the training camp in Herzogenaurach, Sané once again appeared listless. The winger was often the last to arrive and didn't appear an integrated member of the squad. He, like most of Germany's players, endured rather than enjoyed a tough summer on the field too. 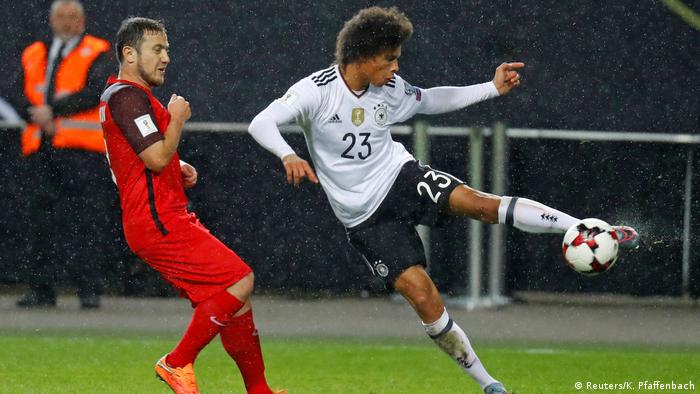 Again though, Sané overcame whistles from Bayern fans at the start of last season to deliver the kind of sparkling, game-winning performances that many grew accustomed to at Manchester City. Even his form for Germany was great: Sané scored twice against Lichtenstein and scored and set up one in an away win in Iceland. That is the Leroy Sané that Hansi Flick wants to see again.

"He has sensational potential that can really help the team. We all have to work towards making that happen again," Flick said in June. "He must get back there."

This month though, Sané showed no signs to suggest he has remained on the right road. Flick fairly pointed out that it has been a long season for all involved, but it feels like Germany's patience is wearing thin.

"Hansi [Flick] is very communicative and works to build up players' confidence, constantly trying to get the players believing, but at some point you have to say, that's it now, now the player has to do something with it," Bierhoff said.

Perhaps all Sané needs, like most players still playing at this point, is a break. German sports magazine Kicker reported that for the new season, Bayern are planning to give the player more peace and quiet, dial down expectation and maybe reduce the number of chats, which are reportedly counterproductive.

Whatever is missing, the hope is he finds it soon. This is a player who on his good day can win games practically on his own, a player worth watching the game for, a player that Germany needs. Right now though, even if he came close to changing that in Mönchengladbach, he is a winger who was last directly involved in a goal at the end of February. It's time for Sané to decide whether he's going to lead Germany in Qatar or force those watching on to adjust their expectations.