Germany ended a grueling run of four Nations League games in 10 days with a 5-2 thrashing of European Champions, Italy. Though the scoreline was impressive, Hansi Flick's side have work to do before the World Cup. 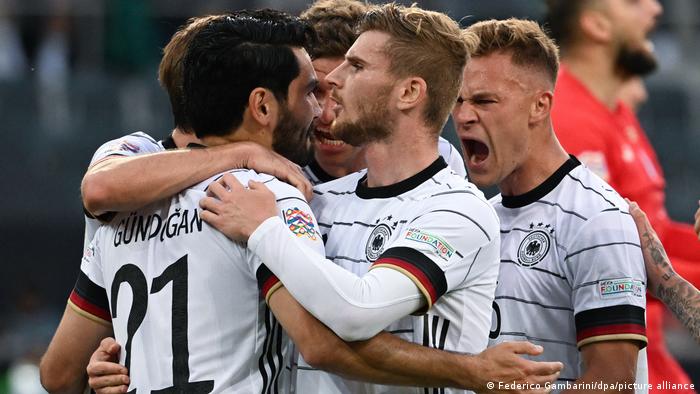 Germany saved their best until last, deservedly sweeping past a heavily-rotated Italy to send the team and their fans, and the coach off into the summer with a greater positivity about the state of the men’s national team.

"I have to give the team a huge compliment for the way they won today," said head coach Hansi Flick. "They did everything we wanted to today. They were brave, put the team under pressure early and we deserved the win and can go into the summer break with a good feeling."

In the late evening sun in Mönchengladbach, the home side put the disappointment of the last few days behind them to score five against Italy for the first time ever and record a first competitive win over their opponents without penalties.

When Thomas Müller’s cross with the outside of his boot was headed down for Timo Werner to finally get on the scoresheet, a comfortable win suddenly became a rout. Werner's second followed in rapid succession. Even if this Italy side was largely unrecognizable, Germany didn’t care. They were enjoying themselves at the end of a long season.

The win and performance against Italy is certainly the best way to finish a run of four games in 10 days, but the overriding feeling at the end of this Nations League series in June is that it left an already tired group of players exhausted. With that in mind, a real sense of where Germany are ahead of the World Cup in five months is hard to find.

At times, Germany were so tired they struggled to hide it even off the field. Manuel Neuer sounded exhausted at the press conference the morning after the Hungary game, while Leon Goretzka was underwhelmed while doing media work with the German FA (DFB).

Despite the euphoria that hung around Borussia Park after the win against Italy, this spate of games in June has put the brakes on Germany’s optimistic World Cup hopes. Four straight 1-1 draws and one big win does mean that they still haven’t lost under Hansi Flick (13 games played), but the performances reveal that even under their new head coach, Germany remain unpredictable.

"We played really good football at times and deserved the win. If we play like we did today, many teams will have a hard time against us," said Gündogan

That may be true, but Germany haven't always played like that in the recent past. For all the brilliance of Neuer, and the emergence of Jonas Hofmann, there was also the disappointment of Leroy Sané and Timo Werner. For the excitement of the England performance and the home display against Italy, there was also the bad in Budapest and the inconsistent in Italy.

Germany are better than before, but still don’t look quite good enough to beat the best.

Other than captain Neuer, the best goalkeeper in the world who didn’t need to convince anyone of his place but did anyway, Jonas Hofmann was the biggest winner this month. The Gladbach utility man looks to have taken his chance, with a Germany World Cup squad without him now unimaginable.

Leroy Sané and Timo Werner will almost certainly be a part of Germany’s squad, but their form is a concern for Flick. Sané found himself in great spots on plenty of occasions, but consistently made the wrong decision. When he did, he was let down by Werner’s finishing. In the second half, the Bayern winger inexplicably failed to find a way past Gianluigi Donnarumma.

Werner did eventually get his goals, but that wasn’t enough to quell the doubts that remain about who will likely be tasked with scoring the goals for Germany in Qatar. Flick saw the positives though. "It's important that players feel that confidence and I think my staff and I have given that. I'm happy for Timo and his goals and Leroy for the pressure he put on the opposition."

Defensively, the space on offer behind the wingbacks remains a worry. At least David Raum offers more going forward than previous options, but both sides look like Germany’s weakest areas. In the middle, Nico Schlotterbeck has shown great potential and an impressive range of passing, but his occasional lapse in concentration might cost him the starting job come Qatar.

Men’s football takes a break for now, thankfully, but when it returns and Qatar looms it will be clear that one strong night in Mönchengladbach does not a great team make.