The Left Party's top candidate in the upcoming parliamentary elections, had nothing good to say about other German parties in a DW interview. But she says she would be willing to join a coalition government.

No foreign deployments for the German army, no arms exports and a limit on refugees: In a Deutsche Welle interview, Left Party top candidate and parliamentary group leader, Sahra Wagenknecht, offered an unmistakable outline of her party's positions. And she also made it clear that under her leadership the post-communist Left Party will have a distinctly leftist profile.

The interview with DW editor-in-chief, Ines Pohl, and reporter Jaafar Abdul Karim, was the first in a series of discussions with leading party candidates for Germany's upcoming parliamentary elections on September 24.

Wagenknecht was unambiguous about the role of Germany's army, the Bundeswehr: Germany must stay out of conflicts around the world, and that includes the fight against the "Islamic State" in Syria.

"I consider it so dishonest to say we are fighting terrorism, while at the same time cooperating with and delivering weapons to those who openly support terrorism."

The Left Party politician was also harsh in her judgment of Saudi Arabia. In the past she has repeatedly criticized German arms sales to Riyadh.

"Saudi Arabia plays a miserable role in all of this. They're not only a warring party in Syria, but have also been shown to be supplying materiel to Islamist organizations and financing Islamist terror groups." 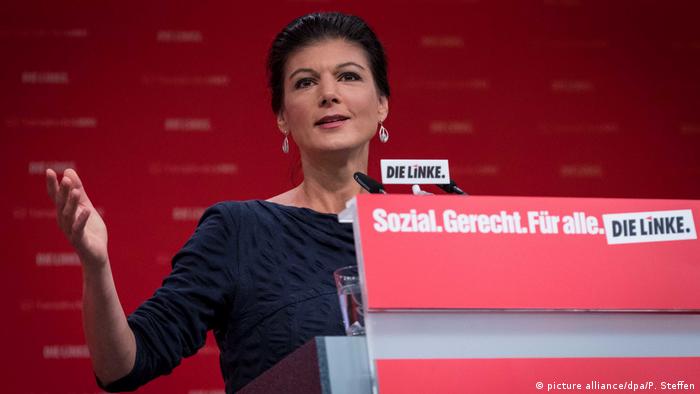 'More important to help on site'

Wagenknecht also repeated her assessment that Germany could not take in unlimited numbers of refugees. That stance has drawn criticism, even from within her own party.

"We are not helping the poor by accepting some people here, because they are unable to come to Germany. That is why I consider it much more important to help people on site."

It was in this context that Wagenknecht leveled criticism at Chancellor Angela Merkel of the Christian Democratic Union (CDU). "Merkel made unilateral decisions that alienated the others. She was always acting unilaterally. That is no way to treat partners in a European partnership."

She went on to say that Germany must fundamentally change its role in relation to other EU member states: "Germany is, today, a country that is dominant in Europe, and which no longer acts as a partner."

The combative Left Party leader was also highly critical of Turkey and its president, Recep Tayyip Erdogan. She went after the Islamic umbrella organization DITIB, which is supported by the Turkish government, as well: "One must be careful not to support certain organizations in Germany, which, for example, support de-integration, teach hate, or that preach hate in mosques. DITIB is, of course, run by Erdogan (the Turkish government)," said Wagenknecht.

She recently voiced strong opposition to Erdogan's desire to hold a separate event addressing his supporters outside the upcoming G20 Summit in Hamburg. The German government has meanwhile denied Erdogan's request.

Does the Left want to govern?

The Left Party parliamentary group leader went on to say that her party is fundamentally prepared to accept the responsibility of governing. Some three weeks ago, at its party convention in Hanover, the Left adopted a clearly leftist campaign program, one that Wagenknecht in large part promoted.

Most observers saw it as a clear renunciation of any possible post-election governing coalition with the Social Democrats (SPD) and the Greens. "I want to govern, but I do not want to practice neo-liberal politics. I want no part in shaping predatory capitalism," Wagenknecht said in the DW interview.

The wife of former Left Party and SPD top politician Oskar Lafontaine also offered a few insights into her personal life: She writes most of her own tweets and Facebook comments, though at times she lets staff write them as well. She likes to sleep in if she has the time.

And asked which German politician she would take with her to a deserted island if faced with the choice, she answered: Christian Lindner, leader of the liberal Free Democratic Party (FDP). Wagenknecht explained that the two have absolutely nothing in common, so they would have little to fight about.