The socialist Left party, the biggest opposition faction in the Bundestag, has presented its two leading candidates for the 2017 election. But can Sahra Wagenknecht and Dietmar Bartsch counter the populist right threat? 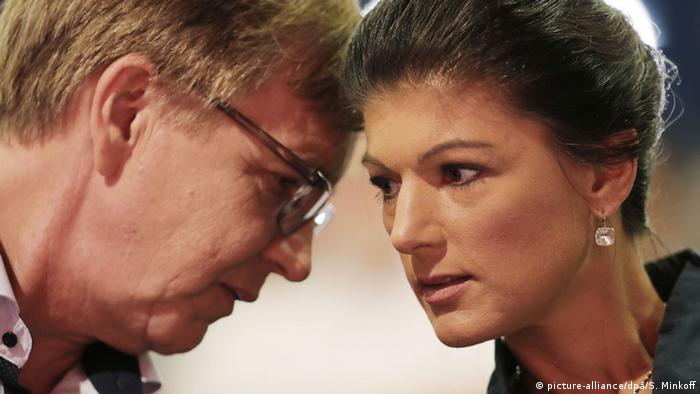 It took a "very animated and lively discussion," according to one of the party's leaders, but after a slight delay on Sunday, the socialist Left party settled on its two parliamentary leaders Sahra Wagenknecht and Dietmar Bartsch (pictured above) as challengers to Chancellor Angela Merkel in next September's general election.

But the pair won't have it all their own way. As part of the compromise, the election campaign will also be run by the party's two chair-people - Bernd Riexinger and Katja Kipping (the speaker of the above quote at the press conference, and rumored to have fought bitterly with Wagenknecht over the candidacy). "We now have the hope and the ambition to go into action together," the latter added. Riexinger, meanwhile, spoke of fighting for a break in the neo-liberal politics dominating Europe.

The long negotiations over the leadership question revealed a split between the Left's parliamentary faction and its grassroots. Insider accounts in the German media suggested that the quartet-plan represented a compromise for Wagenknecht and Bartsch, who had previously told their colleagues that they would only accept the candidacy if they had total control of the election campaign - an ultimatum that garnered them some criticism from the party members.

The new solution has satisfied many members who feared that the Left party was being dominated by Wagenknecht's occasionally abrasive, uncompromising style. "This is a great basis that mirrors the entire breadth of the party," member Dominic Heilig of the "Forum for Democratic Socialism" told the "taz" newspaper. 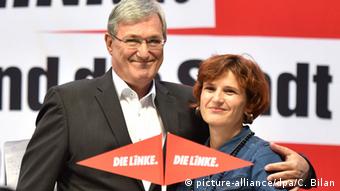 Riexinger (left) and Kipping will help lead the election campaign

Of the four leaders, Wagenknecht will likely be the most visible in the upcoming campaign - and the most uncompromising afterwards if and when it comes to the awkward question of coalition talks. She is considered a part of the old-school wing of the party, and the least disposed to making deals with the more centrist Social Democrats (SPD) and the Greens. Bartsch, Kipping and Riexinger, meanwhile, are understood to be keener to enter a so-called "red-red-green" alliance - and the 58-year-old Bartsch is thought to be popular among his SPD colleagues.

Meanwhile, Wagenknecht's attempts to pander to the populist vote in the past year have troubled many in the party. By bringing up the possibility of a more restrictive refugee policy (and by saying, "whoever has abused their right to hospitality has forfeited it," following the New Year's Eve sexual assaults in Cologne), Wagenknecht seemed to be echoing the right-wing Alternative for Germany (AfD). In response, Kipping icily warned against turning the Left party into the "AfD light."

A debate-style interview alongside AfD leader Frauke Petry, published in early October in the conservative "Frankfurter Allgemeine Sonntagszeitung," did little to assuage those concerns. Even though Wagenknecht took pains in the interview to point out the differences between the Left party and the AfD's positions, the media reaction and the tone suggested that the two women had much in common personally.

The prospect of a red-red-green (or "R2G") coalition is fairly new to Germany, but political developments over the past year have made it a shade more likely next fall. At the state level, it has been tried out twice already - in the eastern state of Thuringia in 2014, where it is led by the Left party's Bodo Ramelow, and in Berlin, where SPD Mayor Michael Müller is about to launch into his first R2G experiment. 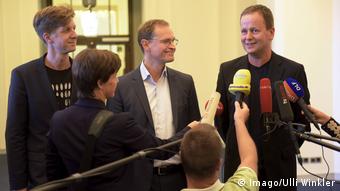 It has not escaped the left-of-center parties' attention that the insurgent AfD - which has taken between 15 and 25 percent of the vote in most of this year's regional elections - has damaged Merkel's conservative Christian Democratic Union more than any other, and could potentially create the opportunity for a leftist majority at the national level in September.

But there are a few hurdles to overcome before that happens. At the moment, the Left party is polling at around 10 percent nationwide, behind the AfD on 13 percent and virtually equal with the Greens, who are on 11 percent. The Left's stated aim this time around is a double-figure result, improving on the 8.6 percent it managed in 2013.

Traditionally, the SPD has ruled out a coalition with the Left party (which was partly born of an acrimonious split in the center-left in the mid-2000s), but the possibility was raised for the first time at an October meeting, at which the federal leaders came together to discuss the ways their various manifestos might be aligned.

The SPD would likely be able to accommodate or find a compromise for most of the Left's domestic plans - a higher minimum wage, higher social benefits, and a more egalitarian tax and pension system - but would have more trouble with its foreign policy of banning all military missions abroad. This could well prove a serious sticking point between the two parties - if it even comes to that.