Turkish President Erdogan has been denied a request to address a rally of supporters in Germany on the sidelines of the G20 summit. German-Turkish relations have sunk from bad to worse over the past year. 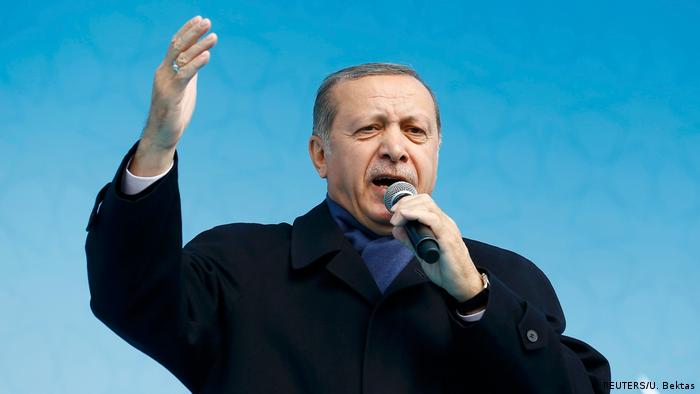 German Foreign Minister Sigmar Gabriel confirmed that Turkish President Recep Tayyip Erdogan's request to address Turkish citizens living in Germany on the sidelines of the G20 summit in Hamburg next week would be rejected.

"We are telling Turkey that we are convinced that such an appearance in Germany is not possible," he said, citing provisions in Germany's Constitution as justification.

"Our country is an open country, but we do not have the intention of allowing other countries' domestic conflicts to be imported into our population," said Gabriel, who also serves as deputy to Chancellor Angela Merkel.

Gabriel described the proposal as "not a good idea," saying that given the tensions between Germany and Turkey, "the political climate" is not ripe for Erdogan to hold a political rally addressing Turks.

"The federal government is of the same opinion on this topic," Gabriel said, hinting that Merkel is in agreement.

In reaction to the decision, Turkey's foreign ministry spokesman Huseyin Muftuoglu said in a statement it was regrettable that some politicians in Germany were making unacceptable comments with domestic political calculations.

Erdogan will attend the G20 summit in Hamburg next week - his first visit to Germany since he and several of his ministers accused Germany and other European countries of "Nazi-like" practices for blocking campaigning for a key constitutional referendum that granted him sweeping presidential powers in April.

In July, Turkey will mark one year since the failed coup attempt, which exacerbated an already far-reaching crackdown against critics of the government, and has led foreign governments to distance themselves from Turkey.

The Turkish president's request to hold a rally comes as he has repeatedly floated the idea of reintroducing the death penalty during speeches at home. Germany and other European countries have said they would not let the Turkish government hold rallies that promote the return of the death penalty, which if reimplemented would officially end the country's moribund EU membership bid.

But at the same time, Ankara is looking to update the customs union agreement with the European Union, despite worsening tensions with the bloc over democratic and human rights norms in general.

German officials have repeatedly said they do not want internal conflicts in Turkey to spill onto German soil, where some 3 million people of Turkish origin live. Already, security circles have warned of potential clashes between pro-Erdogan supporters and Kurdish nationalists around the G20 summit.

German-Turkish relations have gone from bad to worse over the past year, making the issue a political football ahead of national elections in Germany in September.

Earlier, the leader of Germany's Social Democrats (SPD), Martin Schulz, told German daily Bild any Erdogan rally should be banned over concerns about the authoritarian nature of his government.

"Foreign politicians who trample on our values when at home must not be allowed a stage for speeches in Germany," said Schulz, whose SPD is trailing behind Merkel's Christian Democrats (CDU) in the polls. "I don't want Mr Erdogan, who jails opposition politicians and journalists in Turkey, to hold big rallies in Germany."

In another row, Germany decided to pull troops participating in the US-led anti-"Islamic State" mission from an air base in southern Turkey after Ankara refused permission for German lawmakers to visit soldiers.

Adding to tensions, Germany granted asylum to military officers and other diplomatic passport holders whom Ankara accuses of being involved in last July's failed coup attempt.

Relations have also been hit by the deterioration of democracy and human rights in Turkey as well as the continued detention of two German-Turkish journalists on trumped up "terrorism" charges.

European Parliament President Martin Schulz says the EU's refugee deal with Turkey must not lead to concessions on human rights. He criticized Turkey's official reaction to a satirical German video. (03.04.2016)