G20: An appeal for calm in Hamburg's left-wing hotspot

The Schanzenviertel, a possible G20 flashpoint, is one of Hamburg’s most left-wing quarters. Staff and residents at an old people's home have placed banners on their building pleading for calm. Jenny Witt took a look. 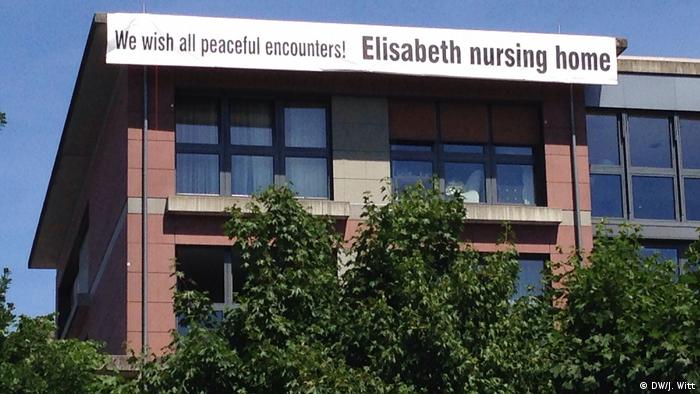 Punks, environmentalists, graffiti and organic food shops dominate the Schanzenviertel. The walls are plastered with political posters - most of them featuring the dates and venues of the many anti-G20 protests.

For weeks, local activists have met at community centers in the area to map out their response to the world leaders' summit. But the less politically involved residents are an equally important part of this district.

They include the 174 senior citizens who live at the Elisabeth nursing home, just a green space away from the security zone around the G20 convention center. The care home is a serene place, with bright rooms, a big garden and even its own bee hives.

Out the front, the main road bustles with traffic, bicycles and - several times a year - small and large demonstrations. They are nothing unusual in this politicized part of town.

But when the leaders of the G20 meet just a few hundred yards away, the protests will be on a different scale. There are likely to be violent clashes between demonstrators and the police over several days.

The largest anti-G20 events look set to draw in excess of 100,000 protesters. 15,000 police officers from Hamburg and all over Germany will be on duty before and during the summit on July 7 and 8.

That is why the care home director, Dr Hans-Jürgen Wilhelm, has taken an unusual step in a bid to safeguard his residents and staff. Three huge banners now adorn the building. "We wish all peaceful encounters! Elisabeth Nursing Home," they state in English. 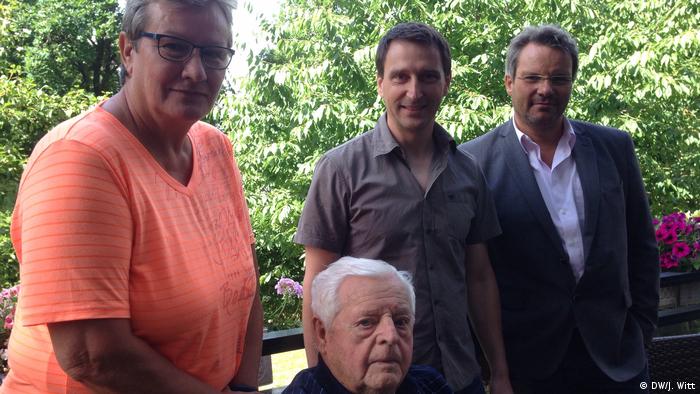 The calm before the storm: staff members and residents are not unduly concerned

The appeal is especially aimed at the thousands of protesters and police officers from outside the city, Dr Wilhelm told DW. "It's about letting them know that this is a care home. We hope that both sides will respect the fact that this is what we are, that we house older people who need assistance, who have to stay here."

Dr Wilhelm has been in close contact with the police for weeks now. Access for ambulances and the emergency services is guaranteed, he says. And the home has pre-ordered food, which it prepares in its own kitchens, so that the protests outside should not lead to shortages.

The residents of the home are stoical about the protests. Among them is Ernst Nack, aged 92, who has lived there for the past two years.

"We know the atmosphere here in the quarter," he says. "It can easily spark disturbances, that's true, but those don't bother me. There are smart and stupid people. Both are likely to want to take to the streets. But me personally - I'm not worried, no."

Klaus Derda is in charge of coordinating the residents' care. He is more concerned about the G20 protests than any previous event, he says. The biggest problem is that staff are likely to be delayed by disturbances and mobile police lines.

The carers have been told that the next shift may turn up late or not at all. The residents' relatives have also been informed of the situation. Derda says they have endorsed the home's measures, including the decision to drape the banners on the building. The management is also hiring two security guards at night time in case of trouble.

The staff, meanwhile, are approaching the summit calmly. Martina Schuldt is an administrator. She says there is plenty of talk about the G20 but little fear. "People do wonder, though, if it's sensible to stage it here in Hamburg of all places," she says. "There are other locations which would take account of people's need to feel safe." 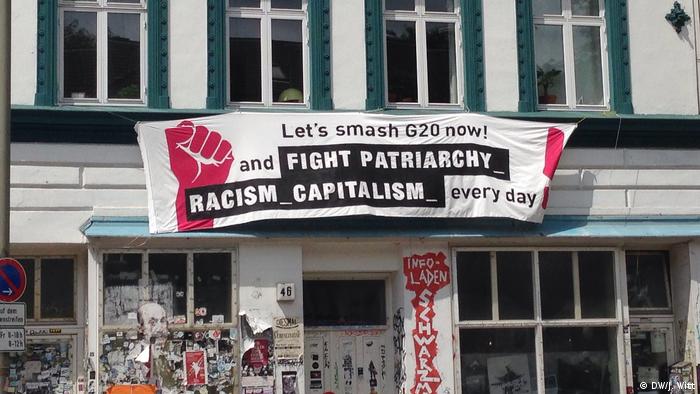 Straight across from the care home: a banner with a very different message

Straight across the road from the nursing home, another building has a banner fluttering from its windows. "Let's smash G20 now," it urges. Every day, fresh graffiti appears, calling on people to demonstrate against,  and even attack the summit.

Care coordinator Klaus Derda says he wants anyone intent on trouble to stay away from the home. "If you want to riot then please don't do it here. We don't want to be part of it, even though we are so close to the summit venue."

The tension is building around the Elisabeth nursing home - but the people there are determined to safeguard this little oasis of calm.