Thousands of men were sent to concentration camps in Nazi Germany because of their homosexuality. Rudolf Brazda, who died last week at age 98, is believed to have been the last survivor of the so-called "pink triangles." 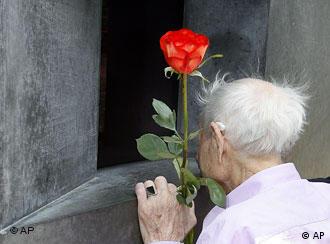 Rudolf Brazda has died in France at the age of 98

Rudolf Brazda, the last known survivor of the thousands of men who were sent to Nazi concentration camps because of their homosexuality and died last week at age 98, was buried Monday near his home in Mulhouse, in eastern France.

"He had an amazingly open, optimistic, humorous personality," Alexander Zinn, Brazda's biographer, told Deutsche Welle. "The theme of his persecution wasn't something that had dictated his life. Although of course it affected him deeply, he didn't let it have a stranglehold on him: he managed to come to terms with what had happened and leave it behind him. He didn't let it ruin his life."

Brazda was born in Germany in 1913 and was living as an openly gay man in Leipzig when Adolf Hitler came to power. The Nazis quickly expanded anti-gay legislation and began raiding gay pubs and meeting places. Brazda was arrested for the first time in 1937 and sentenced to six months in prison for "debauchery." He was then deported to what was then Czechoslovakia, where he stayed even after it was occupied by the Nazis in 1938.

Brazda was arrested for a second time in 1941 and sent to the Buchenwald concentration camp the following year, where he was made to sew a pink triangle onto his uniform identifying him as a homosexual. He remained at Buchenwald for three years until the camp was liberated by American soldiers in April 1945.

After the liberation, Brazda moved to Mulhouse in eastern France near the German border. In the 1950s, he met Edouard Meyer, who became his life partner. Brazda and Meyer were together for over half a century until Meyer's death in 2003. 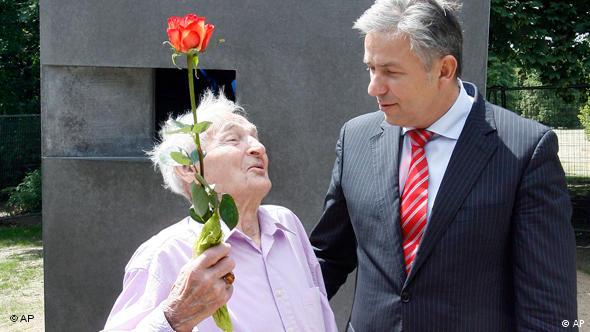 For decades, Brazda remained largely silent about what had happened to him. It wasn't until May 2008, when Berlin's openly gay mayor Klaus Wowereit unveiled a memorial to gay and lesbian victims of persecution in Nazi Germany, that Brazda came forward. He had apparently seen an item about the ceremony on television and contacted the organizers to correct a claim that the last witness had already died. Three weeks later, the then 95-year-old Brazda traveled to Berlin, were he visited the memorial with Wowereit, clutching a red rose.

"Of course he was very overwhelmed by this situation, and a bit intimidated," said Alexander Zinn, who was present at the ceremony. "But then you quickly saw that the ice had broken."

Zinn published his biography of Brazda, entitled "Happiness Always Came to Me," earlier this year. "That was something he said to me when we first met," Zinn explained. "It's simply the best expression of his personality and his attitude towards life." 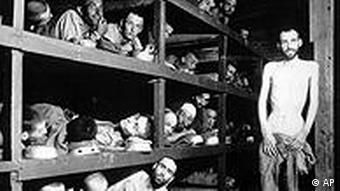 Buchenwald was liberated by US troops in April 1945

On hearing the news of Brazda's death, Wowereit said he was an example who showed "how important the work of remembrance is for our future," because there are fewer and fewer people who can tell us first hand about persecution under the Nazi dictatorship.

Last year, Brazda traveled back to Buchenwald, as guest of honor at a memorial ceremony.

"He always put the fate of others at the center of his reflections about the past," Zinn said. "If you asked him about his own situation and his own feelings, then he mostly gave evasive answers. I think that's fairly typical of what happened to many survivors after they were liberated ... he said he was always lucky."

In April this year, President Nicolas Sarkozy awarded Brazda the Legion of Honor.

The last of thousands

An estimated 10,000 to 15,000 gay men were sent to Nazi concentration camps. Homosexuality was seen as an infectious disease, and gay men were considered to be as obstacles to Hitler's plan to nurture the Aryan race.

At Buchenwald, camp inmates were routinely subjected to forced labor - many were literally worked to death. They also had to contend with severe malnutrition, outbreaks of disease and medical experiments.

In the Nazi concentration camp hierarchy, gay men were forced to wear pink triangles identifying them as homosexual. Jews had to wear a yellow Star of David, and political prisoners wore red triangles.

The practice of converting gays and lesbians into heterosexuals has been making waves in the US for several years. Now some fundamentalist groups hope to see it thrive in European countries like Germany and the UK. (07.08.2011)

Under the Nazi regime, the police were not obligated to commit murder. But many did. A new exhibition in Berlin reveals the extent to which the police were involved in Nazi atrocities. (10.04.2011)