Kashmir: Is the UN Security Council reluctant to get involved?

Although the Security Council told India and Pakistan to resolve the Kashmir dispute bilaterally, it didn't call a formal meeting or issue a statement. Some analysts dubbed the response "lukewarm." 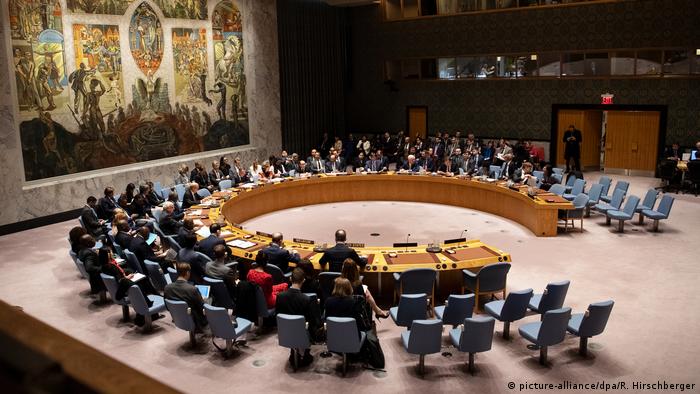 Members of the United Nations Security Council on Friday refrained from calling for an emergency session on the disputed Kashmir region.

Instead, they urged India and Pakistan to resolve the matter bilaterally.

The ongoing Kashmir crisis was just one of several topics that the 15-member UN council discussed on Friday in a "consultative" meeting.

Pakistan and India both rule the disputed Himalayan territory of Kashmir in part, but claim it in full. The restive region is a flashpoint between the nuclear-armed archrivals. China, too, has some territorial claims in the area.

"They (Security Council members) are also concerned about the human rights situation there [in Kashmir], and also it's the general view of members that parties concerned should refrain from taking any unilateral action that might further aggravate the tension there, since the tension is already very tense and very dangerous," China's UN ambassador, Zhang Jun, said on Friday.

India's UN ambassador, Syed Akbaruddin, reiterated New Delhi's stance that Kashmir is not an international conflict. He accused Zhang of trying to pass off his remarks as "the will of the international community," adding that India's latest Kashmir move was an internal matter.

"If there are issues, they will be discussed, they will be addressed by our courts; we don't need international busybodies to try and tell us how to run our lives. We are a billion-plus people," Akbaruddin told reporters.

Pakistan is lobbying to gain international support against India's Kashmir measures and was hoping for a formal UNSC meeting on the issue. However, there is no indication after the Friday consultation that this could happen anytime soon.

Pakistan's UN ambassador, Maleeha Lodhi, nonetheless considered the UNSC consultation to have been a success, saying it had brought the Kashmir dispute back to the fore.

Lodhi said that Pakistan would continue its efforts and that this "will only end when justice is done to the people of Jammu and Kashmir."

"I welcome the UNSC meeting to discuss the serious situation in Occupied Jammu and Kashmir," Khan tweeted. "Addressing the suffering of the Kashmiri people & ensuring resolution of the dispute is the responsibility of this world body," he said.

'Back to square one'

Observers said that the Security Council had put the onus of resolving the conflict on India and Pakistan.

"The UNSC's decision to not issue a statement or call an emergency meeting on Kashmir shows its reluctance to get involved in this dispute," Anwar Iqbal, a Washington-based Pakistani analyst, told DW. "Instead, it wants India and Pakistan to resolve this issue in a bilateral setup. And this is what both India and Pakistan say that they also want."

"India called this a vindication of its position, as New Delhi continues to insist that all issues with Pakistan, including Kashmir, can only be discussed in a bilateral forum," Iqbal added.

"But India also said that there can be no bilateral talks with Pakistan until Islamabad eradicates terrorism. So, we are back to square one; no talks on Kashmir, bilateral or international," Iqbal said.

New Delhi accuses Islamabad of backing militant Islamist groups in Kashmir. India's prime minister justified his Kashmir move by saying that it would end "terrorism and separatism" in the area.

Indian security officials on Wednesday said a group of militants backed by the Pakistani military had tried to infiltrate India-administered Kashmir to launch an attack, according to Reuters partner news agency ANI.

The Indian government on Friday said it would lift restrictions on people's movements and communication links in Kashmir in the next few days, a process that it had already started by Saturday.