Pakistan has requested that the UN Security Council meet over India abolishing Kashmir's special autonomous status. Tensions have escalated in the region, which has been disputed for more than 70 years. 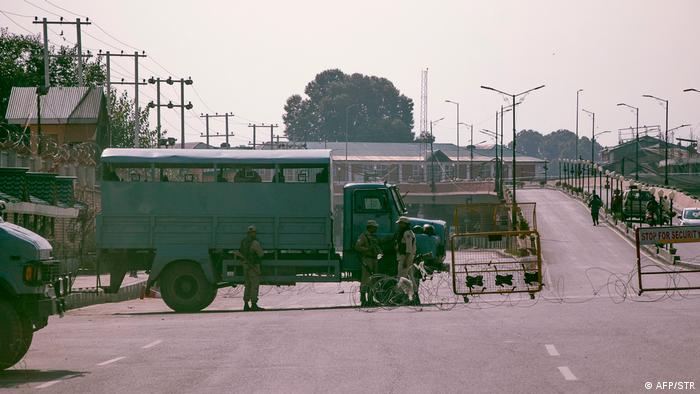 Pakistan on Tuesday called for the United Nations Security Council to meet over India's decision to remove the special autonomous status of the disputed Kashmir region.

Last week, India's Hindu-nationalist-led government abolished the autonomous status of the Indian-controlled section of Kashmir, a Himalayan region that has been claimed in its entirety by both India and Pakistan since partition in 1947. Since the decision, telephone lines, internet and television networks have been blocked and there are restrictions on movement and assembly.

In a letter to the UN, Pakistani Foreign Minister Shah Mahmood Quereshi denounced "recent aggressive actions" by India, saying they "willfully undermine the internationally recognized disputed status of Jammu and Kashmir." He also accused India of "racist ideology" aimed at turning its part of Kashmir from a Muslim-majority into a Hindu-majority territory.

"The Indian actions on August 5, 2019 have opened the way for realization of this fascist policy objective," Quereshi wrote.

"Pakistan will not provoke a conflict. But India should not mistake our restraint for weakness," he continued. "If India chooses to resort again to the use of force, Pakistan will be obliged to respond, in self defense, with all its capabilities."

He said the Security Council had an obligation "to prevent the recurrence of another Srebrenica and Rwanda," referencing the genocides in Srebrenica, Bosnia, in 1995 and Rwanda in 1994.

Poland currently holds the rotating presidency of the Security Council for the month of August. Polish Foreign Minister Jacek Czaputowicz confirmed to reporters at the UN on Tuesday that the council had received the letter, saying it "will discuss that issue and take a proper decision."

"Poland believes that this can only be resolved by peaceful means and ... we are in favor of dialogue between Pakistan and India to sort out the differences," he said. "Strained relations between India and Pakistan negatively affect the whole South Asia region and may lead to serious political, security and economic difference."

It was not clear whether the Security Council would respond to the request or whether a member of the 15-member body would also need to make a request. Pakistan said on Saturday that it had China's support for the move.

After British colonial rule ended in 1947, India and Pakistan fought their first war over control of Kashmir, whose population is mainly Muslim. The UN brokered a cease-fire in 1948 that left Kashmir divided, a resolution that came with the promise of a UN-sponsored plebiscite on its "final disposition" that has yet to be held.

The UN Security Council adopted several other resolutions over Kashmir in the 1950s, including one that calls upon both sides to "refrain from making any statements and from doing or causing to be done or permitting any acts which might aggravate the situation."