At least five people have been killed in gunfire along the Kashmir border, Pakistani officials have said. The border skirmishes come amid heightened tensions in Kashmir over India's move to revoke the region's autonomy. 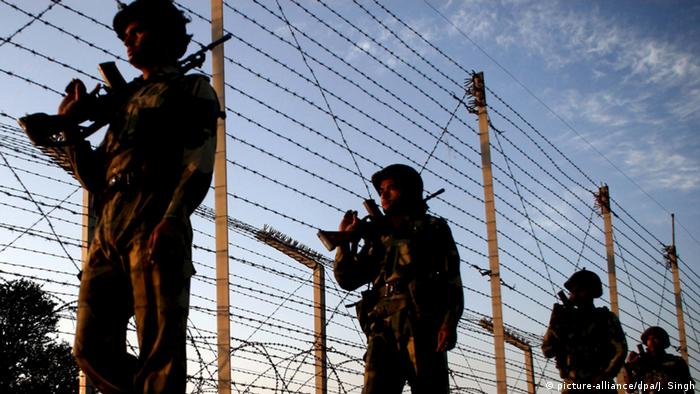 Cross-border skirmishes between Indian and Pakistani armies have killed at least five people, the Pakistani military said on Thursday.

Pakistan said a number of its troops died in the Indian attack, whereas a counterattack by the Pakistani border forces also killed Indian soldiers.

There was no immediate confirmation of the attacks from Indian officials.

Tensions in the Himalayan region are high due to Indian Prime Minister Narendra Modi's decision to strip the India-administered Jammu & Kashmir region of a special autonomous status on August 5.

Pakistan and India both rule the disputed Himalayan territory of Kashmir in part, but claim it in full. The restive region is a flash point between the nuclear-armed archrivals. The latest border clashes invoke fears of a larger military conflict between the two South Asian neighbors.

The Pakistani military said in a statement that the Indian border attacks were part of New Delhi's tactics to "divert attention" from the crisis in Kashmir.

In his annual independence on Thursday, Prime Minister Modi justified his decision to revoke Kashmir's partial autonomy, saying that his "fresh thinking" would help ensure harmony in South Asia.

"We do not believe in creating problems or prolonging them," Modi told the nation.

New Delhi accuses Islamabad of backing militant Islamist groups in Kashmir. Earlier this week, Modi justified his Kashmir move by saying that it would end "terrorism and separatism" in the area.

Indian security officials said on Wednesday a group of militants backed by the Pakistani military tried to infiltrate India-administered Kashmir to launch an attack, according to Reuters partner ANI.

India authorities have detained a number of state leaders and had troops deploy barricades and razor wire on roads to prevent protests. Internet and phone services were also suspended, prompting residents to communicate with notes and human couriers .

On Wednesday, Pakistani Prime Minister visited "Azad Kashmir" – the Pakistan-controlled part of the area – as a show of solidarity with the Muslim-majority region. He told the lawmakers there that Islamabad would "fight until the end" for Kashmir.

The Pakistani government observed a "black day" on India's Independence Day on August 15. Both Indian and Pakistan gained independence from British colonial rule in 1947.