Japan eyes aircraft carriers to counter North Korea, China | Asia | An in-depth look at news from across the continent | DW | 01.01.2018

Concerns over N. Korea's unpredictable regime and China's expansionist policies have forced Japan to seek reinterpretation of parts of the constitution that ban the nation from having an offensive military capability. 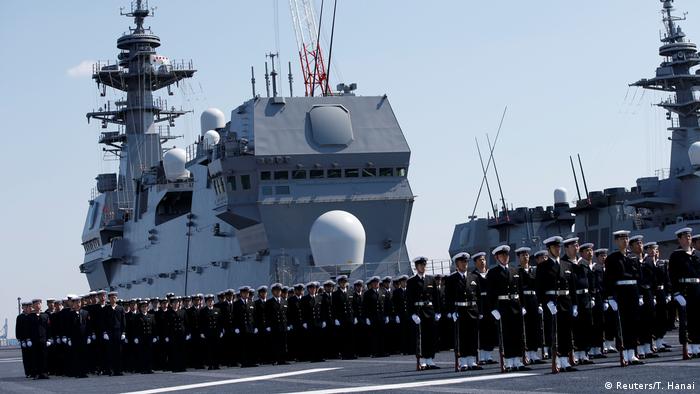 The Japanese government is considering upgrading the largest ships in the Maritime Self-Defense Force's fleet to enable it to operate a new generation of fighter aircraft, although there are concerns at home that transforming two Izumo class warships — presently designated as helicopter destroyers — into aircraft carriers will contravene the constitutional clause on Japan not possessing offensive military capabilities.

China has expressed similar reservations, although for "historical" reasons rather than fears over Japan's constitution. Beijing was quick to warn Tokyo to "act prudently" in the purchase of Lockheed Martin F-35B Lightning fighters, the short take-off and vertical landing variant of the stealth fighter, and carrying out upgrades to the Izumo and the Kaga, the only two helicopter destroyers in the Japanese navy. 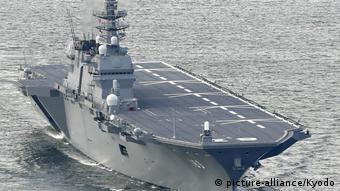 Commenting on the reports, a spokesperson for the Chinese Foreign Ministry said that enhancing the capabilities of Izumo-class ships would inevitably attract the attention of Japan's neighbors for "historical reasons" — a clear nod at the nation's use of aircraft carriers to carry out the attack on the US Pacific Fleet at Pearl Harbor in 1941 and subsequent operations during World War II.

Analysts point out that the Japanese government insists that the constitution does not specifically ban Japan from having aircraft carriers and that they should be considered defensive weapons rather than power-projection platforms.

"Even though these ships already look very much like aircraft carriers, they are officially classified as helicopter destroyers, but the changing security environment in the Asia-Pacific region means that Tokyo believes it now needs a full flat-top capable of handling stealth fighters," said Jeff Kingston, director of Asian Studies at the Japan campus of Temple University.

"That is a major development that follows Prime Minister Shinzo Abe's doctrine of easing the restraints that have been put on the Japanese military since the end of the war," he told DW.

The Japanese military believes it faces two primary threats. The most immediate is North Korea, which is becoming increasingly belligerent and unpredictable, even though it is under strong international sanctions. Those sanctions have so far not stopped the regime from developing increasingly capable long-range ballistic missiles and a growing stockpile of nuclear warheads.

The other threat is a China that is apparently bent on expanding areas of the Asia-Pacific region that it controls. Beijing has already effectively seized reefs and atolls in the South China Sea that are also claimed by Vietnam, the Philippines, Taiwan and Brunei, while it has also stepped up aggressive military patrolling close to Taiwan.

Tokyo's biggest concern is related to the Sino-Japanese tensions over Senkaku/Diaoyu islands in the East China Sea, a group of uninhabited islets which lie half-way between Japan and China. They are administered by Tokyo but are claimed by Beijing.

Effectively undefended, Tokyo fears that Chinese troops could very quickly occupy and militarize the islands. Consequently, Japan is developing new defensive capabilities that would be used to retake the islands, with the upgraded Izumo-class ships a key part of that as F-35s would be able to provide close-in support over the territory.

Of the two, Kingston believes that North Korea is presently at the forefront of Tokyo's thinking when it comes to the Izumo warships.

"Japan is clearly very anxious about the threat posed by North Korea, which fired 20 missiles in 2017," he said. "The feeling is that Japan needs to beef up its anti-missile defenses at home, as well as have the ability to strike at targets in North Korea if there is a direct threat to Japan.

"And the argument is that an aircraft carrier that would be tasked with carrying out a pre-emptive attack on targets inside North Korea, would be acting defensively because it would be protecting Japan," he said.

"Japan will say — quite rightly — that it lives in a dangerous neighborhood, that it cannot continue to bury its head in the sand of unilateral pacifism and that it exists in a very different threat environment than it did in the 20th century," he said.

"China cannot complain; it is developing its own aircraft carrier capabilities and its military budget has seen double-digit growth rates for the last 20 years or so and presently stands at about three times that of Japan," Kingston pointed out.

Stephen Nagy, a senior associate professor of international relations at Tokyo's International Christian University, believes that the Japanese government will do everything in its power to portray any enhancement in the ships' capabilities as defensive in nature.

"The question of 'projection of power' is largely a matter of semantics at this point, but the fact is that if they go ahead then the vessels will be able to launch fighter aircraft," said Nagy, who is also a fellow of the Asia Pacific Foundation of Canada. "So they are walking a very fine line between defensive and offensive power."

And that ambiguity is "going to create further tensions in the region, most notably with China," Nagy told DW.