Shinzo Abe′s victory: A mandate to amend Japanese constitution? | Asia | An in-depth look at news from across the continent | DW | 23.10.2017

Japanese PM Shinzo Abe has defended his coalition's two-third majority in snap elections. The victory is historic but comes with many challenges, including how to deal with the North Korean threat. Martin Fritz reports. 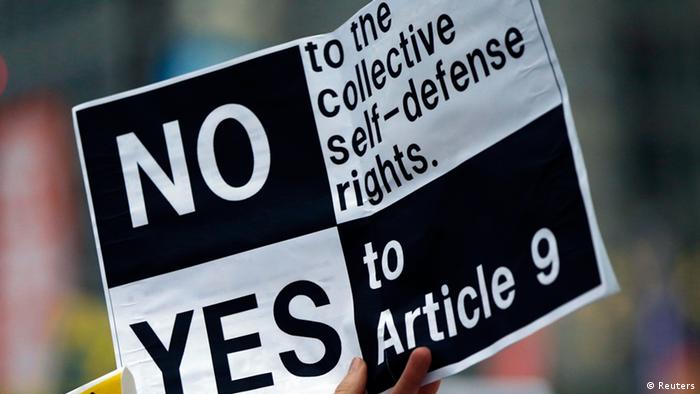 After his fifth election victory in just under five years, Shinzo Abe is well on his way to entering the history books as the longest-serving Japanese leader in the modern era. If Abe is re-elected in September 2018 as chairman of his Liberal Democratic Party (LDP), he could remain as prime minister until the Tokyo Olympic Games in 2020. LDP politician Sato Eisaku, who served as prime minister from 1964 to 1972, currently holds the record.

Abe's resounding victory in Sunday's snap election gives impetus to the forces that want to revise the Japanese constitution. "The question is no longer whether, but how to revise the constitution," says Satoshi Machidori, a professor of law at the University of Kyoto.

Abe's minor coalition partner, the Komeito party, is skeptical about the revision, but supporters of the constitutional amendment now have the necessary two-third majority in both chambers of parliament.

Immediately after the election, Abe promised to deepen the Japanese people's understanding of proposed constitutional reforms and reach consensus on party disputes.

"I will strive for an agreement with as many people as possible," Abe said.

The constitutional debate mainly focuses on Article 9, which renounces Japan's right to war. Nevertheless, by 1954 Japan had introduced self-defense forces. Abe wants to expand the role of Japanese forces and their deployment possibilities. However, a departure from pacifism could polarize public opinion and inject new vigor into the opposition. In that case, it might be difficult to achieve the simple majority in a referendum that is required to change the constitution.

Abe is likely to continue with this foreign policy course toward North Korea. The conservative premier wants to hit two birds with one stone: on the one hand, continuing tensions between North Korea and the US allies in the region would justify Japan's departure from pacifism; on the other, Abe can prove to be a reliable US partner to counter Chinese ambitions in the region.

The 63-year-old politician is facing domestic opposition regarding cronyism in his administration. However, Abe owes his victory in snap elections to the country's positive economic outlook, which is supported by the upswing of the global economy.

"Abe's firm grip on Japan is also due to the lack of an alternative," said Koichi Nakano, a political analyst at Sophia University, Tokyo.

The Democratic Party, the largest opposition group in Japan, has suffered due to the rise of the Tokyo Governor Yuriko Koike's "Kibo no To," or "Party of Hope" and the new Constitutional Democratic Party led by the former DPJ member Yukio Edano.

The new political alignments impeded the formation of a joint opposition. Additionally, the opposition parties lacked a figurehead after the popular Koike renounced her candidacy.

Despite Abe's success in the election, the voter turnout was recorded at only 54 percent, which was  also the case in the previous lower house elections three years ago.

For that reason, Sebastian Maslow, a political scientist at the University of Kobe, says "the election result should not be viewed as a clear endorsement for Abe's policies."