Japan: Is a new sun rising for Japan's Shinzo Abe?

Japanese Prime Minister Shinzo Abe's coalition has secured a comfortable win in parliamentary elections, according to exit polls. He benefits from a strong economy and a weak opposition. Martin Fritz reports from Tokyo. 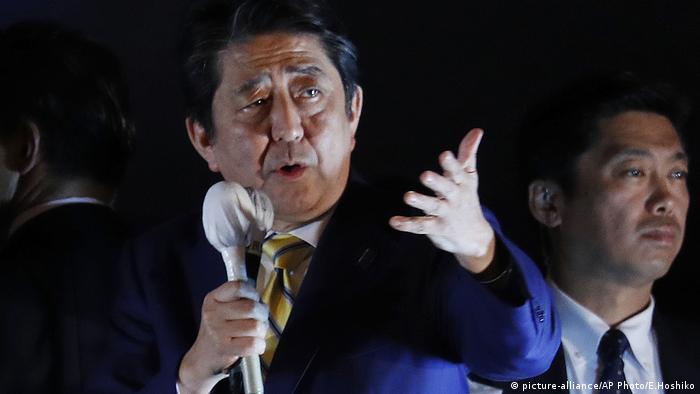 The latest opinion polls show that Japan's ruling coalition, made up of Shinzo Abe's Liberal Democratic Party (LDP) and Komeito, is on track to take two-thirds in the lower house of parliament. Even though the bloc will likely lose several seats, it is expected to continue to control two-thirds of the legislature. As a result, the nationalist Abe would be able to extend his reign beyond 2020's Tokyo Olympic Games — making him the longest-ruling prime minister in Japan's history.

Abe can no doubt attribute part of his success to Japan's economy, which has grown for six consecutive quarters. Three million new jobs were created under Abe. At the same time, unemployment has hit its lowest level in two decades. The business climate can be compared to its peak phase in 1991. 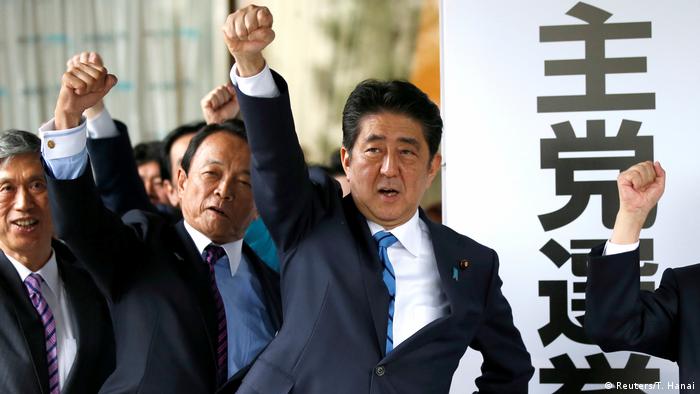 These days, companies are posting record-breaking profits, while the Nikkei 225 index has reached a 21-year high. Still, many people in Japan complain about stagnating wages, high prices and growing social disparity. "But this dissatisfaction is probably not enough to create a mood of change," said Sebastian Maslow, a political scientist at Japan's Kobe University.

The 63-year-old Abe also seems to have gambled successfully by calling elections a year early. In the first half of the year, Abe's popularity slumped in the face of several scandals, but after North Korea's missile test over Japan, his popularity ratings rose again as he sought solidarity from Donald Trump. Japan is partially dependent on US military protection, and the nationalist leader speculated that voters would support him given the threat posed by North Korea's nuclear program.

Although Japan's opposition realigned itself after Sunday's elections were announced, many of the new political alliances did not manage to put forward candidates and Abe's opponents have not united. Sixty-two percent of the parliament's 465 seats are allotted to candidates who win in their constituencies, and 38 percent of seats are distributed according to party.

"If the opposition does not present any clear alternatives over the medium term, for example in tax and social policy, there is no end in sight to the LDP's monopoly of power," the political scientist Maslow said.

One opponent of Abe's who has caused a stir is 65-year-old Tokyo Governor Yuriko Koike. When the parliamentary elections were announced last year, Koike — then a member of Abe's LPD — reacted by founding her own right-leaning pro-reform party after joining forces with like-minded politicians in the nominally centrist opposition Democratic Party of Japan (DPJ).

Her "Kibo no To" ("Party of Hope") dealt a blow to the LPD in elections for Tokyo's metropolitan assembly in July, establishing the charismatic leader as a political force to be reckoned with. But the initial enthusiasm for Koike quickly waned, and surveys indicate that her party will probably become the third-strongest force.

She also served as defense minister for a few months during Abe's first term as prime minister from 2006 to 2007 and has found it difficult to set herself apart from her old party. "The voters quickly realized that Koike's platform did not differ much from Abe's and that she does not stand for change," said Maslow.

Koike came to terms with this fact early on and refrained from running for parliament as critics accused her of neglecting her duties as governor of the capital. As a result, the opposition has lacked a unifying figurehead. 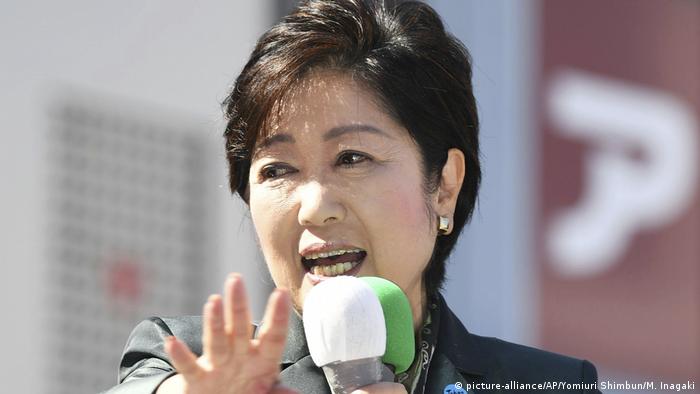 Some of Abe's opponents have gravitated toward the new Constitutional Democratic Party, led by the former DPJ member Yukio Edano, who is well-known in Japan for his frequent TV appearances on behalf of the government as chief cabinet secretary following the Fukushima disaster in 2011. He founded the CDP with the remaining centrist DPJ parliamentarians after Koike's Hope nicked the party's most staunchly right-wing politicians.

In the few weeks since its inception, the CDP has attracted more than 184,000 followers on Twitter — by comparison, Abe's LDP has just 130,000. Surveys predict that Edano's party will be the second-strongest in parliament after Sunday's elections, even though it managed to put forth an average of just one candidate for every four constituencies. "By acting quickly and wisely, Edano has filled the void in the centrist political spectrum," Maslow said.

After the election, the CDP's ranks could continue to swell through an influx of independent legislators. But, for the time being, Abe's dominance looks likely to remain untouched.