The Italian interior minister toured the Sicilian center with politicians and reporters, calling it a haven for drugs, prostitution and violence. Salvini has said he wants to deploy military ships to keep migrants away. 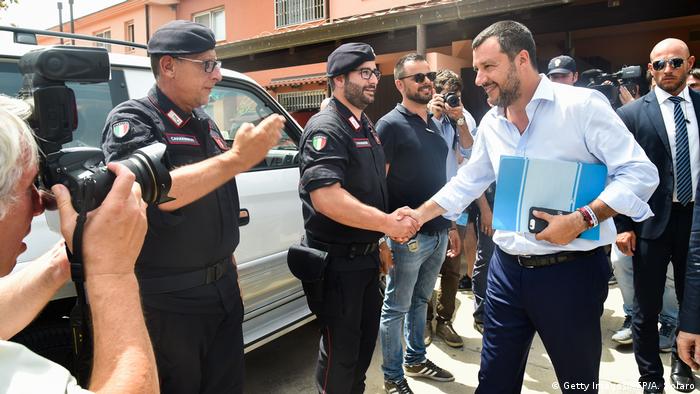 Italian Interior Minister Matteo Salvini toured what was once Europe's largest migrant reception center on Tuesday, accompanied by politicians, reporters, and police. The Mineo migrant center on Sicily, a former US military base, housed as many as 4,100 migrants in 2014, now, as Salvini triumphantly announced, it houses "zero."

The far-right interior minister, who also serves as Italy's deputy prime minister, said Mineo had been a center of "drugs, prostitution and violence." The 152 residents that were evicted from the site last week have been relocated to another center in Calabria. The Mineo center is now guarded by Italian soldiers.

Salvini spoke with reporters as he posed in front piles of discarded furniture and toured rooms filled with belongings left by former inhabitants, telling them that police had found that Italian and Nigerian mafias had "expanded as a drug-dealing operation in the whole local area."

DW reporter Amien Essif said some local people came out to protest against the camp's closure and the loss of jobs it provided to the community.

During a short press conference, Salvini said, "Mineo is closing and it's a beautiful morning." He also noted that he had written to his Tunisian counterpart to urge him to stem the flow of migrants departing from the North African country and to take back those Tunisians that Italy turns away as quickly as possible.

Some 3,126 migrants have arrived in Italy since the beginning of 2019. Most of them have been from Tunisia, followed by Algeria, Bangladesh, Iraq, Ivory Coast, and Pakistan.

Italy intends to invest more heavily in resisting migrant arrivals by sea, and on Monday Salvini announced his desire to deploy military ships and air patrols to keep migrants away from Italy.

The country will also give 10 motorboats to the Libyan coastguard so that smugglers' vessels can be caught before they get to international waters.

Over the past several months,  migrant arrivals have seen an uptick, as smugglers drag overloaded boats out into international waters where migrants are often rescued by charity vessels or national authorities.

Salvini has declared war on charity rescue vessels, barring them entry to Italian ports, impounding their vessels, jailing their captains, and fining their owners up to €50,000 ($56,000). He recently said he is mulling the idea of raising fines to €1 million in an effort to finally resolve the situation.

The rescue ships, however, are just part of Salvini's perceived problem, as far more migrants reach Italy's shores on their own.

Yet the rescues go on

The rescue ships continue to save migrants and bring them to Europe despite knowing that two such vessels were impounded last month.

Last week, the Alan Kurdi, a vessel operated by the German organization Sea-Eye, rescued 65 people in the Mediterranean. Maltese authorities agreed to take the migrants ashore, and they have already been distributed to various EU countries.

On Tuesday, Italian officials rescued another 47 migrants and brought them to Sicily.

Slavery in Italy - A fight for farmworkers

Both Italy and Malta have been critical of the EU's lack of clarity on how to deal with stranded migrants. The bloc's "case-by-case" approach often means that migrants spend days or weeks at sea before it is determined where they should be taken.

With the flow of migrants showing no signs of abating, Salvini said he feels "left alone" by Five Star Movement ministers, who are coalition partners with his own far-right Lega party.

After Five Star leader Luigi Di Maio derided Salvini for the statement, Prime Minister Luigi Conte announced that he would meet with the two on Wednesday to iron out differences.

A statement released by Conte's office said. "The meeting was convened to coordinate action by the various ministers and to avoid any overlaps or misunderstandings."