More than 500 migrants have been forcibly removed from Italy's second-largest refugee center. Italy's populist government claims it is "helping Italians," but the town complains that years of hard work are being ruined. 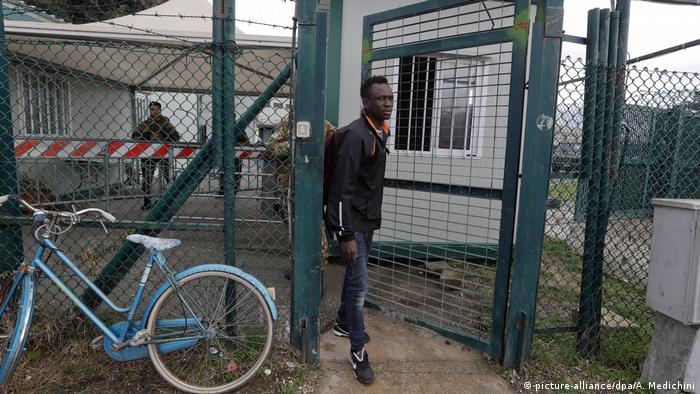 The Italian government evicted over 500 people from the country's second-largest refugee center on Tuesday and Wednesday, taking people away in buses to undisclosed locations. The mayor of Castelnuovo di Porto, a small suburb north of Rome, said the migrants were removed from his town with little warning or further information.

Thousands of migrants have passed through Castelnuovo di Porto in the past decade, and it was famously the site of Pope Francis's traditional Easter foot washing in 2016. The move comes a little more than month after a new immigration law, dubbed "Salvini's decree," after hard-line anti-immigrant Interior Minister Matteo Salvini, came into force.

Mayor: Years of work, integration and jobs will be lost

"In one fell swoop, not only will years of commitment and goodwill be swept away, but also educational projects, schooling, recreational courses, enrollment in local sports associations, voluntary and social work carried out by the town together with Rome, and 107 jobs dependent on the center will also be lost," a statement from Mayor Riccardo Travaglini said, stressing that many of the refugee children had already spent years in local schools.

The refugees were taken away after staging a mass sit-in against the move on Tuesday. Interior Minister Salvini, leader of the far-right Lega (League) party, claimed that the center had become a haven for drug-dealing and crime. He has promised that the removed migrants will be sent to other "beautiful places."

According to Italian daily Corriere della Sera, some of the 535 migrants have been shipped off to other detention centers, but hundreds are expected to be deported.

'The problems of Italy are not migrants'

Travaglini scoffed at Salvini's suggestion that he was "helping Italians" by shuttering major refugee homes.

"The problems of Italy are not migrants but the widespread and endemic issues we face every day: unemployment, corruption, the Mafia, tax evasion, a broken justice system…a lack of resources for security," the mayor said.

A few refugees in Castelnuovo di Porto have taken refuge in people's homes, including 24-year-old Mouna Ali, originally from Somalia, who has been living with Travaglini's family as she tries to find a permanent housing solution.

"I do not want to leave Italy," she was quoted by the Corriere della Sera as saying. "I want to realize my dream of studying to be an intercultural mediator."

Interior Minister Matteo Salvini insists Italian ports "are closed" after the latest docking request by a Spanish migrant rescue ship. The Madrid government later gave permission for the migrants to disembark in Spain. (22.12.2018)

A "new European Spring" to replace the "French-German axis" has been coined by Italy's interior minister Matteo Salvini while visiting Polish populists. His foray precedes the EU's parliamentary election in May. (09.01.2019)